Editor’s Note: This article by Matthew Cox originally appeared onMilitary.com, the premier source of information for the military and veteran community. Army... 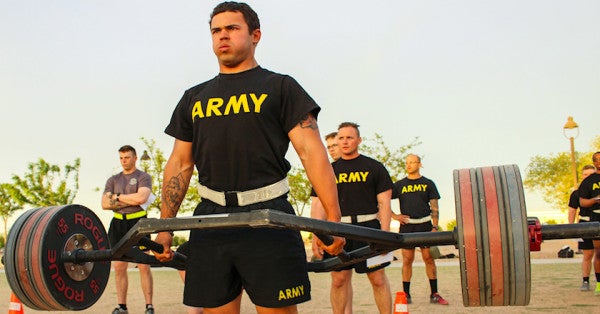 Army fitness officials recently released the manual for the upcoming Army Combat Fitness Test, including tips for pleasing graders on each event.

Beginning in October, the service will conduct a large field test of the ACFT, involving soldiers from 60 battalions across the active-duty, National Guard and Reserve components.

“While the ACFT is backed by thorough scientific research and has undergone several revisions, there are still details that have not been finalized,” according to the ACFT Field Testing Manual released Sept. 6. “The purpose of the Field Test is to refine the field administration and scoring of the ACFT.”

The six-event ACFT is scheduled to officially replace the Army Physical Fitness Test in October 2020.

“There are no test event re-starts. Incorrectly performed repetitions will not be counted,” the manual states.

Here is a look at what graders will likely be looking for on each ACFT event:

This is a three-repetition maximum deadlift to test muscular strength. Graders will terminate a record attempt (which counts as one of two record attempts) if the soldier drops or bounces the weights off the ground or rests in the down position. Resting means no continuous effort is being made to lift the weight.

This event involves throwing a 10-pound medicine ball as far as possible over the head and to the rear. The soldier must make one practice throw and two record throws. A record attempt will not count if a soldier steps on or over the start line during a throw. This is a fault, and the throw will be repeated. Two faults in a row will count as a record attempt, and the soldier will receive a “0” for that record attempt

Related: Here’s What You Need To Do To Pass The Army’s Combat Fitness Test »

This is five different events within one event: a 50-meter sprint; a backward 50-meter drag of a 90-pound sled; a 50-meter movement; a 50-meter carry of two 40-pound kettle bells; and a final 50-meter sprint. Graders will call soldiers back to the start line or the 25-meter turn line to correct violations in performance to include: failure to touch the line with a hand and foot while sprinting or doing laterals or failure to pull the entire sled across the 25-meter or start line.

A soldier's body must continue past the line pulling the sled backward until the entire sled crosses the line. The soldier may then turn the sled. Failure to pull the entire sled across the start line before beginning the laterals or throwing or tossing the kettlebells on the ground will also result in violations in performance.

A soldier hangs perpendicular to the pull-up bar and brings his knees up to his elbows and back down again for one repetition. A repetition will not count if a soldier: fails to touch both knees (or thighs) to both elbows, swings or twists to establish momentum to lift the knees, fails to return to a straight-arm position; has arms fully extended in the down position or pushes off the post, ground or bar with back or foot to establish momentum to lift the knees. Incidental contact with the ground, post or bar is not penalized if the grader deems the soldier has gained no advantage. The event will be terminated if the soldier drops from the bar or rests on the ground.

After completing all six events, soldiers must review and sign their scorecards, the manual states.

“Any discrepancies must be resolved at the test site,” it adds. “Requests for reconsideration will not be permitted after the scorecard has been signed and turned in.”