Army researchers at Fort Detrick, Maryland have begun testing a potential coronavirus vaccine on animals, the first of many steps in manufacturing a widely available prevention against the virus 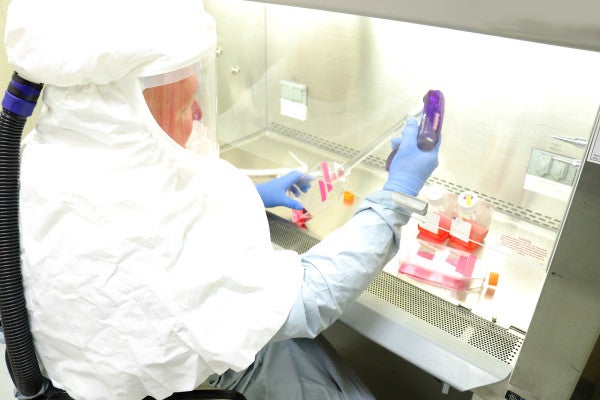 Army researchers at Fort Detrick, Maryland have begun testing a potential novel coronavirus (COVID-19) vaccine on animals, the first of many steps in manufacturing a widely available prevention against the virus, Defense Department officials announced Monday.

Friedrichs stressed while the vaccine-testing process is moving as quickly as possible, a breakthrough treatment is still months away.

“Once we know that they're safe, then we expand the testing candidates,” he explained. After animal testing, researchers will evaluate the the medicine in a small group of people, then a larger test group. “Only when we know they'll be both safe and effective [will we] be able to offer them more widely.”

“We are still months away, not weeks away, from a vaccine,” he said.

The military is also testing a number of drug mixtures that could dampen the severity of the coronavirus' symptoms, or even the length of the infection; Friedrichs said it's possible those results will come in faster than a potential vaccine.

That also includes trials with hydroxychloroquine. Friedrichs said that while the drug is “not widely being distributed” to military personnel, the Pentagon is conducting a small-group study on its capabilities to treat COVID-19 cases.

President Donald Trump in recent weeks has touted the effectiveness of hydroxychloroquine, used to fight malaria as well as a treatment for patients with arthritis or lupus, as a “game-changer.” Evidence that it works, however, is anecdotal at best.

Trump has said its effectiveness can be increased when paired with azithromycin, an antibiotic.

The drug has been used overseas: doctors have administered hydroxychloroquine in France, Spain, Italy and China during the growing pandemic, according to various media reports.

A small French study on the use of hydroxychloroquine released last month found that the drug, a derivative of chloroquine, lowered the virus counts of 20 patients with COVID-19 within six days of it being administered. Six individuals who took the drug along with azithromycin, tested negative for coronavirus within a week.

According to the Centers for Disease Control and Prevention, physicians in the U.S. have been using it “off-label” — for use other than what is recommended by the Food and Drug Administration — to treat patients hospitalized for COVID-19.

Some U.S. patients who have spoken to media outlets in recent weeks about their treatment and or hospital experience have given credit to the drug combination in their road to recovery.

Fauci has repeatedly stated that additional research is needed to determine whether the medications are safe and effective for treating COVID-19. In some cases, hydroxychloroquine can adversely affect those with chronic heart or blood pressure problems.

“The data are really, just, at best, suggestive,” Fauci said on CBS's “Face the Nation” Sunday.

“There have been cases that show there may be an effect and there are others to show there's no effect,” Fauci said. “So, I think in terms of science, I don't think we could definitively say it works.”