If President Trump orders the Army to build a wall along the southern U.S. border, don't expect to see soldiers and green bulldozers on the job 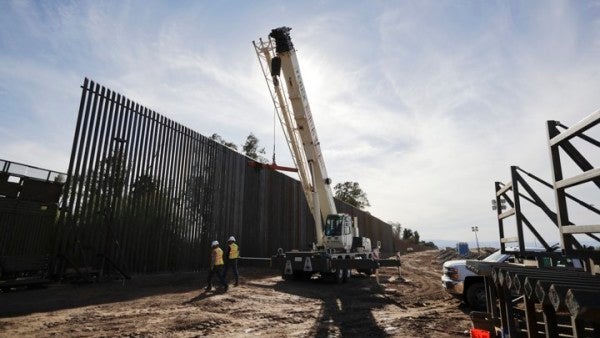 If President Trump orders the Army to build a wall along the southern U.S. border, don't expect to see soldiers and green bulldozers on the job.

“The Army Corps of Engineers is responsible for contracting for commercial builders to construct the wall,” Secretary of the Army Mark Esper said in Alabama on Tuesday. “They've been doing it for years. That's ongoing. I'll just leave it at that.”

Esper was asked after a visit to Huntsville's Redstone Arsenal if the Army is doing any planning to build the wall and what the challenges would be in building it. Trump has tweeted during the standoff with Congress over funding for the wall that the Army could build it if he declares a national emergency situation.

The Wall Street Journal reported today that, “The White House has asked the Army Corps of Engineers to examine potentially diverting money from other projects to pay for the wall along the U.S.-Mexico border, if Mr. Trump does decide to declare a national emergency.”

The Corps of Engineers has a civil division that is responsible for military construction and projects like dams and ports across the country. The Corps' military functions include needed work at military installations including facilities and infrastructure construction.

The Washington Post reported Jan. 11 that the president also “is eyeing unused money in the Army Corps of Engineers budget, specifically a disaster spending bill passed by Congress last year that includes $13.9 billion that has been allocated but not actually spent for civil works projects.” The Post reported that Trump has asked the Corps of Engineers to determine how quickly it could sign contracts and begin work.

Esper's visit to Alabama was to visit contractor Northrop Grumman and key military and civilian leaders at Redstone to monitor progress on the “Future Vertical Lift” vehicle, a new generation of helicopters that is one of the service's key priorities for the future.

Redstone is working on Future Vertical Lift, which will develop a new family of helicopters with shared hardware such as sensors, avionics and engines. Northrop Grumman has won an Army contract to upgrade Black Hawk helicopter cockpits with new open-architecture digital technology, and the contractor has a large presence in Huntsville.