In a dramatic sign of the coronavirus' anticipated toll, the Army Corps of Engineers is planning to convert vacant hotels, college dormitories and other facilities into intensive care wards with tens of thousands of makeshift hospital beds, first in New York but probably expanding to California and other states 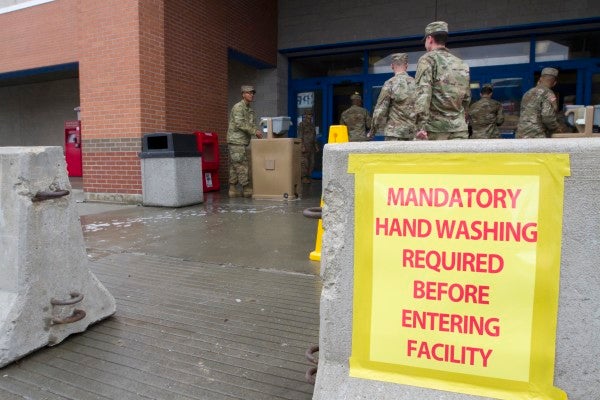 In a dramatic sign of the coronavirus' anticipated toll, the Army Corps of Engineers is planning to convert vacant hotels, college dormitories and other facilities into intensive care wards with tens of thousands of makeshift hospital beds, first in New York but probably expanding to California and other states.

That announcement Friday at a Pentagon news conference by Lt. Gen Todd T. Semonite, commander of Army Corps of Engineers, marks an escalation of the U.S. military role. Already it is providing 2,000 ventilators and 5 million protective masks and preparing to dispatch hospital ships on both coasts. Governors are calling up thousands of National Guard troops.

Yet, the armed forces face serious limitations in joining the response to the COVID-19 outbreak, current and former officials warn, not least because their expertise is in handling battlefield injuries, not infectious disease. Military doctors are already providing essential services to a more than a million service members and their families, and medical personnel in the reserves are hard at work —in their own communities.

Given the limitations, former military officials and experts said the government should proceed with caution. Charles Dunlap, a former Army major general and military lawyer, in an essay this week argued that “a significant military mobilization … is a bad idea.”

He cited a number of problems with such an approach: The military health system is stretched thin, civilians are better at responding to pandemics, and the armed forces face legal restrictions on engaging in domestic law-enforcement duties. In an email, Dunlap added that the military must remain focused on its most important job — waging war.

The Pentagon “needs to make it known that it is on high alert to ensure no adversary tries to take advantage of the situation to conduct hostile operations,” Dunlap wrote. “This is why it's so important that [the Defense Department] avoid the appearance or fact of being distracted by the coronavirus emergency, or that the capabilities needed for war-fighting are being diffused and dissipated.”

Military leaders agree and have emphasized the work of the National Guard, which can be called into action by governors, to help with law enforcement, provide security, transport supplies and more. Battling the virus is challenging, these leaders say, because the whole country is under fire, even if some areas are hit worse than others.

Lengyel noted, however, that the current crisis is nothing like a storm: “Unlike a hurricane, you don't know when it will dissipate or move out to sea.”

The Army corps' planning reflects that uncertainty. Semonite said his engineers on Tuesday began touring hotels, dormitories and a convention center in New York City, from a list that city officials provided, to determine which ones to turn into “ICU-like facilities” accommodating more than 10,000 beds. The city would lease the chosen properties, and the corps would hire contractors to finish construction within weeks.

Planning also is underway for 15 other states, including California, Washington and New Jersey. “We have to do something very, very quickly,” Semonite said. “Most governors say their peak will be mid-April.”

“This is an unbelievably complicated problem,” he added, “and there is no way we are going to be able to do it with a complicated solution. We need something super simple. So our concept here is a standard design.”

So far, governors in at least 27 states have mobilized more than 2,000 National Guard troops, and the number was expected to double by Sunday. In the last week, a Tennessee Air National Guard unit flew 500,000 swabs for test kits from Italy to Memphis, where FedEx has a hub and can distribute them. Troops are delivering food in hard-hit New Rochelle, N.Y. And more than 500 soldiers are assisting in collecting diagnostic samples at drive-through testing centers in south Florida.

Officials said they expect many more troops to get called up.

“It's hard to tell what the exact requirement will be, but I'm expecting tens of thousands to be used inside the states as this grows,” Lengyel said.

The biggest deployment so far involves the Navy's activation of two hospital ships to help backstop strained healthcare systems. Though each has 1,000 beds, the ships' doctors will not be caring for those stricken ill by the virus. Defense Secretary Mark Esper said they would probably be used to treat patients suffering from noninfectious ailments and injuries, freeing civilian hospitals to focus on patients with COVID-19, the respiratory disease caused by the new coronavirus.

The Navy hospital ship Mercy, based in San Diego, will be ready to sail within days to assist hospitals, probably on the West Coast, officials have said. Another ship, the Comfort, is undergoing maintenance in Norfolk, Va., and is weeks away from being sent to New York.

Despite the cautions on deploying the military, some experts say it could actually be doing more. Dr. Stephen Xenakis, a retired brigadier general, said reserve medical units should be called up to provide care in tent hospitals, perhaps in Central Park.

“That's what combat is all about — triage,” Xenakis said. “I would be setting up hospitals near medical centers to take the load off. We could treat those patients not needing space in intensive care units.”

Military leaders are hesitant to commit such resources, Esper said, because they would be “robbing Peter to pay Paul.”

“All those doctors and nurses either come from our medical treatment facilities or they come from the reserves, which means civilians,” he told reporters this week. “What I don't want to do is take reservists from a hospital where they are needed just to put them on a ship to take them somewhere else where they are needed.”