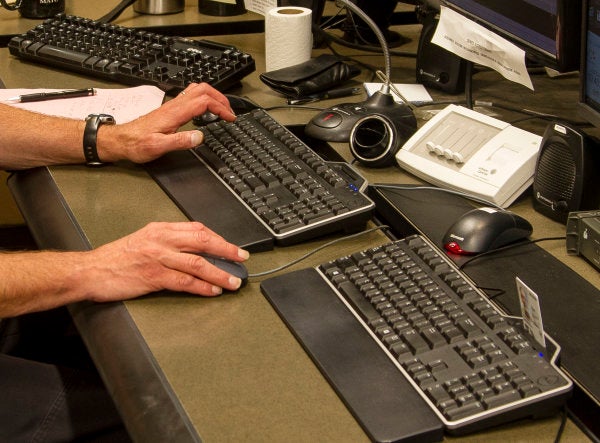 Court records say 42-year-old Adam Matthew Clark of Moore County was arrested by the Fayetteville Police Department on April 5 on charges that he stalked and cyberstalked his ex-wife, Elizabeth Ann Clark of Fayetteville. The charges are misdemeanors.

In August, Elizabeth Clark sued Adam Clark and Kimberly Rae Barrett, his new significant other. She alleges they have harassed her, spread nude photos of her online and published libelous comments about her. Elizabeth Clark's suit also accuses Kimberly Barrett of alienation-of-affection — of breaking up her marriage with Adam Clark.

The lawsuit alleges the harassment stems from a dispute over how much child support that Adam Clark should pay to Elizabeth Clark for the care of their two children.

Neither Adam Clark's lawyer nor Kimberly Barrett's lawyer responded to requests for comment for this story. In court papers, they deny the allegations in the lawsuit.

Elizabeth Clark's lawyer Michael Porter on Friday showed The Fayetteville Observer examples of the activity he alleges was committed against Elizabeth Clark. He has a copy of a personal ad that was posted in the “Missed Connections” section of the Craigslist classified advertising website. The ad says she can't take care of her children and that she has herpes.

Porter contends the ad was posted by Adam Clark.

Porter has another ad, this one published on Facebook, that uses a partly nude photo of Elizabeth Clark and another photo of her in her underwear. The ad is a parody of a weight-loss ad and its text mocks her.

The nude photo in the Facebook ad came from a text message Elizabeth Clark sent to Adam Clark to flirt with him when they were still married, Porter said.

The nude photo was also in the possession someone on the Kik online messaging service, Porter said.

The criminal stalking charges against Adam Clark stem not from the Craigslist ad or the Facebook ad, but from an account created on Kik, Porter said.

Kik is a smartphone app used for text messaging with individuals and text chatting with groups of people. Media accounts say Kik offers a level of anonymity that makes it popular with people who want to to engage in sexually explicit conversations with strangers and share sexually explicit photos with each other.

“Clark has been posing as his ex-wife, Elizabeth Clark, in private Kik 'chat groups' utilizing Ms. Clark's name and images to interact with men in an effort to humiliate her and cause emotional harm,” Porter said. “Many people refer to this practice as 'catfishing.' The aforementioned Kik 'chat groups' appear to be dedicated to men and women within or associated with the military seeking to arrange illicit sexual encounters.”

Porter said he believes the activity on Kik led to strange men showing up at Elizabeth Clark's home and that she was recognized in public by men who believed that they had been interacting with her on Kik.

“To our knowledge, the fake profiles of Ms. Clark remain active on Kik. This misconduct has caused severe emotional distress and embarrassment to Ms. Clark,” Porter said.

The criminal charges from the Fayetteville Police Department accuse Adam Clark of impersonating Elizabeth Clark in an electronic communication to other people in order to harass her. They warrant says he made “a false statement about indecent conduct” regarding her. The warrant does not specifically mention Kik as the means by which the electronic communication took place.

When the lawsuit was filed last summer, Adam Clark was a Special Forces major at Fort Bragg. The 1st Special Forces Command said at the time that it was investigating the allegations against him.

It's not clear whether Adam Clark is still in the Army — the “employment” field of his arrest warrant is blank and he has facial hair in his arrest photo, suggesting a separation from the service. A spokesperson for 1st Special Forces Command received a query about his status from The Fayetteville Observer on Friday.

Kimberly Barrett is a physician and an Army lieutenant colonel.

Staff writer Paul Woolverton can be reached at pwoolverton@fayobserver.com or 910-486-3512.