The Army Is Deactivating Its Long Range Surveillance Teams … Again

The Army will quietly deactivate its three long-range surveillance companies in the active-duty force in the remaining days of January,... 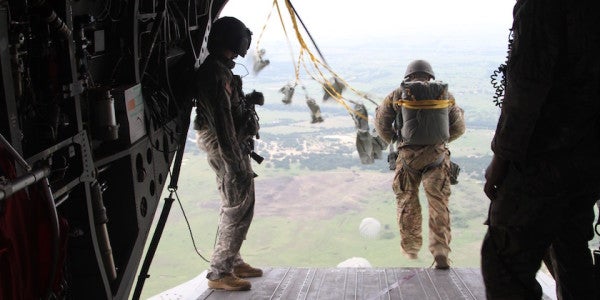 The Army will quietly deactivate its three long-range surveillance companies in the active-duty force in the remaining days of January, along with four National Guard companies in 2018, the Army said.

The nearly 100 soldiers in each of three active-duty companies attached to three Corps commands at Fort Hood in Texas, Fort Bragg in North Carolina and Joint Base Lewis-McChord in Washington will be reassigned to other units at those posts, said Lt. Col. Christina Kretchman, an Army spokeswoman.

Army National Guard units in Nebraska, Georgia, Indiana and Alabama will fold up their long-range surveillance companies and reassign those soldiers in August 2018, Kretchman said.

Stars and Stripes first reported in July that senior leaders decided to deactivate the companies through an evaluation in the Total Army Analysis, a force structure program used to balance the composition of the force with strategy and resources.

Related: The Army’s Tortured History With Drawdowns And Budget Cuts »

Computer models were used to conclude long-range surveillance companies were not in demand by ground commanders.

Defense analysts have said Army commanders have an aversion to risk and a growing preference to use technology such as satellites and drones for reconnaissance rather than insert small teams of soldiers.

Long-range surveillance companies in the Army are comprised of 15 six-man teams led by a staff sergeant. The teams specialize in navigating forward positions to monitor enemy movement and gather intelligence for commanders.

The tasking of infantry soldiers gathering intelligence in small, self-sufficient teams has been a part of Army doctrine since before the American Revolution, when British reconnaissance troops raided enemy garrisons and harassed patrols in the French and Indian Wars.

Soldiers in long-range surveillance companies have served in Iraq and Afghanistan, tracing their lineage through Cold War Europe, Vietnam and the famous Alamo Scouts, who liberated prisoner of war camps during World War II.

An unceremonious end to long-range surveillance companies comes amid a buildup of thousands of U.S. troops and hardware in Europe not seen since the Cold War and the transition to President Donald Trump, whose rhetoric has called for less engagement in the region and a stronger, more robust military.

But fresh blood in the Pentagon might lead to new decisions and examinations of past assessments, said Todd Harrison, a defense budget expert at the Center for Strategic and International Studies, a Washington think tank.

“A lot of force-structure decisions may be reopened and re-litigated in the next six months or so,” Harrison said. “Now, the political environment seems to have shifted, and the Army might not be drawing down anymore. They may go in a different direction” with long-range surveillance companies.

Matt Pelak, a senior noncommissioned officer who served in the now dormant long-range surveillance company of the Texas National Guard, criticized the deactivations but welcomed a potential revaluation.

“I’d like a relook of capabilities we’re getting rid of and what common sense adjustments we can make,” Pelak said, noting the Army deactivated reconnaissance units after World War II and Vietnam, only to resurrect them again in the Cold War, when institutional knowledge had to be rebuilt.

“Why do we keep going through this when the Army has brought it back so many times?” Pelak asked.

The strategies used by soldiers in reconnaissance units have been a favored asset in Eastern Europe, particularly in Estonia, a NATO ally on Russia’s northwestern flank.

The Maryland National Guard has longstanding training agreements with Estonian troops under the State Partnership Program, a Pentagon initiative which links Guard units with ally militaries.

Members of the Maryland long-range surveillance company, deactivated last year under a separate restructuring move, honed small-team reconnaissance tactics with Estonian special operations troops, who consider it a key skill in the face of a much bigger and technologically advanced Russian military.

“The new administration needs to think about what capabilities that allies do not have that the U.S. can provide,” Harrison said. “We have to have those capabilities ourselves.”

The Army said its decision to deactivate long-range surveillance companies relied on the output of several computer models which “help determine overall priorities of what the Army needs in future combat scenarios,” Kretchman said, but declined to identify model specifics such as geography and adversary data, citing its classified nature.

Scales stressed he was not familiar with the models used to determine the deactivation decision. But he said as a contractor in the 1990s with a Ph.D. in operations research, he reached similar results in models and found significant problems in coding and logic.

Scales consulted on the Target Acquisition Fire Support model at Fort Sill, Oklahoma, home of artillery training for the Army and Marine Corps. The model was produced to determine a proper mix of weapons and personnel to use in a given conventional scenario, like defending against Russian or Iraqi tank brigades, he said.

The model had specific detail about artillery down to individual rounds leaving the tube, Scales said. But infantry units were grouped in the aggregate, and long-range surveillance units were coded as infantry units with no real-life characteristics, like observing without firing on the enemy, he said.

“They assumed when a ground combat unit encountered another, they would have a firefight,” Scales said.

Long-range surveillance soldiers in the model would attack large units and were killed immediately based on their coding, Scales said, delivering war planners the conclusion the units were a risky, low-reward asset.

Scales alerted senior leaders about the coding issues that could affect doctrine.

“That’s the infantry school’s problem, not our problem,” he was told.

He also said other logic inputs would need to be present to determine the worth of long-range surveillance units, like lines of code to account for limited use of unmanned drones in bad weather, or leaving areas of surveillance to refuel.

Long-range surveillance teams are trained to conduct reconnaissance on an objective for days at a time, Scales said.

“Did they account for this? I have no idea,” he said.

Pelak said the Army could have made decisions based on the idea of U.S. superiority against technologically austere enemies such as the Islamic State group and Taliban without considering advanced militaries such as Russia and China.

“With increasing capabilities on both sides like countermeasures and drones, I think that demonstrates need for manned surveillance teams,” he said. “When GPS satellites are knocked out and drones can’t fly, who is going to watch the enemy?”