Editor’s Note: This article by Matthew Cox originally appeared on Military.com, a leading source of news for the military and veteran community. The U.S. Army today... 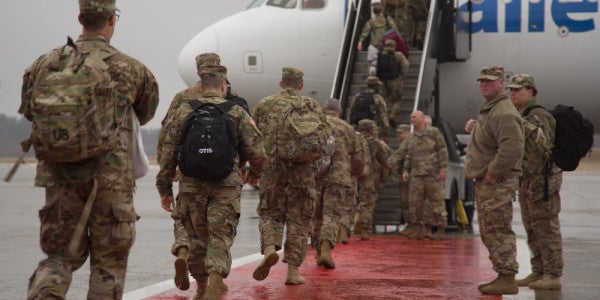 The U.S. Army today publicly released its new policy for dealing with soldiers who are non-deployable for administrative reasons, just over a month after the Pentagon's new deploy-or-out policy took effect Oct. 1.

“Since a year ago, we have come from 121,000 non-deployables, which is about 15 percent of the total Army,” Calloway told defense reporters at the Pentagon today. “We have come down to right at 6 percent.”

Some of those non-deployable troops have been processed out; others have resolved any outstanding issues that prevented them being able to deploy.

But the new Retention Policy for Non-Deployable Soldiers, which “nests” in the Defense Department's larger policy on non-deployable troops, only applies to less than 20 percent of the current non-deployable population.

“This policy doesn't apply to all 59,000 ,” Calloway said, explaining that “the vast majority of those, 80 percent, are medical. And then another portion are legal.”

The rules do not “change or adjust the current medical authority or procedures for any type of medical evaluation for medical retention or processing through the disability evaluation system,” said Diane Randon, deputy assistant chief of staff for Army G1.

The new policy, however, does for the first time define what it means to be deployable, Army officials said.

To be considered deployable, a soldier in the active, National Guard and Reserve must be:

“It's the first time we've actually ever put down on a piece of paper, no kidding, this is what constitutes deployability,” Calloway said, explaining the policy also represents a cultural shift in how the Army views deployability as it relates to readiness.

In this year's centralized selection list boards, “individuals competing to be battalion or brigade commander were required to certify to the board that they were fully deployable and could pass their physical fitness test, and that action in of itself was culture change driver,” Calloway said. “When all of a sudden everybody in a formation realized, 'oh my gosh, the brigade commander and battalion commander are now forced to certify this; what … implications does that have for me if I don't maintain my own individual readiness.'”

The policy is also meant to empower commanders to look at soldiers on a case-by-case basis to evaluate if for some type of waiver will make the Army more effective, Army officials said.

A soldier who fails to establish a family care plan could be granted a waiver from separation “because of unique family circumstances.”

Other waivers might be granted to those who “had a significant amount of skill, such as a cyber or other shortage specialties,” Calloway said. “The commander would say, based on the collective assessment of this person's value back to the Army, we are going to request an exception to policy to retain this soldier.”

The deputy chief of staff for Army G1, chief of the Army Reserve and chief of the National Guard Bureau are authorized to grant retention waivers. All requests for waivers must be “endorsed with a recommendation, at a minimum, by the first general officer in the chain of command,” the policy states.