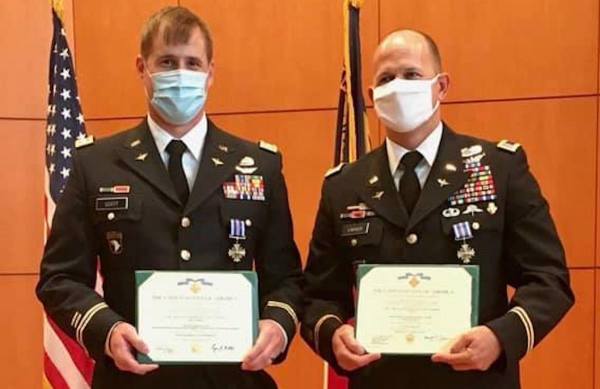 Army Capt. Stephen Scott and Chief Warrant Officer 4 Eric Carver, both of the 1-130th Attack Reconnaissance Battalion, received the medals for their support of the 7th Special Forces Group's Operational Detachment Alpha (ODA) 7225 during Task Force Panther, according to a release.

In November 2018, troops from ODA 7225 were dropped off in a remote area of Afghanistan's Uruzgan Province when they began taking heavy enemy fire, the release said. Scott and Carver, flying in an Apache, quickly identified enemy positions and “engaged them after permission was given,” it said.

One of the objectives during the night raid was to capture a senior Taliban Leader in Deh Rawud District, Chief Warrant Officer 2 Brandon P. Faia, ground force commander for Special Forces ODA 7225, said in the release.

Acting as co-pilots and gunners, Scott and Carver were “repeatedly engaging a robust enemy force at … close range to friendly forces,” according to their award citations, obtained by The Fayetteville Observer.

Their steadfast reaction “resulted in a successful mission for ODA 7225 without injuries or loss of lives,” the release said.

Faia hailed their achievement, and said the two were consistently reliable in risky situations.

“Pilots and Green Berets have their own languages,” Faia said. “We could always count on Carver and Scott to chime in and say, 'Oh yeah, the place you are going to is not safe, but you can count us in.'”

He added, “Immediately we became friends.”

Three months earlier that year, Taliban fighters launched an offensive assault in Ghazni province that spilled over into neighboring districts. Insurgent assaults continued weeks following, with many Afghans fleeing to southwest regions like Uruzgan and where Afghan forces faced off against Taliban fighters, according to the Washington Post.