The Air Force Accidentally Dropped A Humvee Over North Carolina

A military vehicle was mistakenly dropped from a plane over Harnett County on Wednesday, but no person or property was... 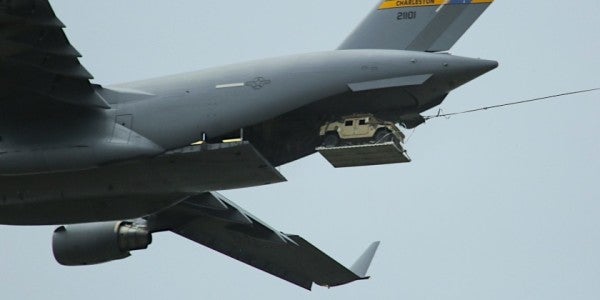 A military vehicle was mistakenly dropped from a plane over Harnett County on Wednesday, but no person or property was damaged, according to Fort Bragg officials.

The High Mobility Multipurpose Wheeled Vehicle, better known as a Humvee, was to be dropped via parachute as part of a routine test at Fort Bragg, which is known as the Home of the Airborne.

The testing involved a pallet onto which the Humvee was loaded.

Tom McCollum, a post spokesman, said the vehicle was prematurely dropped from an Air Force C-17 about 1 p.m.

The plane was about a mile from Sicily Drop Zone, flying at an altitude of 1,500 feet, when the Humvee and pallet were dropped about a minute too early, McCollum said.

All three parachutes opened, he said, and the vehicle landed in a wooded area between two homes on Walter Lane, off Gilchrist Road, which is between Johnsonville and Spout Springs, a little more than seven miles north of Fort Bragg’s drop zones.

There was no damage to any of the homes or residents. The only damage was to several trees and the vehicle itself, McCollum said.

James Grant, 78, lives in one of the homes. He said his wife was outside, saw the parachutes opening and yelled for him.

Grant heard the crash as the load, weighing a total of 3 tons, hit the ground.

“It sounded like a car crashing,” Grant said. “When it happened, my wife and I went to see. We saw a parachute laying on the road.”

The couple initially was concerned that a soldier might have been making a jump and was injured. Grant called 911, he said.

“That's when everybody came,” Grant said, referring to firefighters and law enforcement.

“A few minutes later, they told us there might be explosives and had us all move back.”

Bobby Brown and his wife live on Gilchrist Road, on the opposite side of Walter Lane.

The Browns were inside the residence when they saw parachutes coming down behind a relative's home across the road. Then, Brown said, they heard a crash. He, too, said it sounded like a car crash.

The Humvee landed about 300 feet behind a home.

The heavy drop was being conducted by soldiers from the Airborne and Special Operations Test Directorate, McCollum said. The unit tests new equipment and procedures to support the aerial delivery and transportation of military equipment.

A crane was brought to the site to lift the Humvee and pallet onto a large flatbed truck.

Because the equipment was being tested, it was considered classified, McCollum said.

Military personnel and Harnett County Sheriff's Office deputies kept spectators at a distance as the Humvee was removed from the site.

The Humvee and pallet were wrapped in a green tarp and strapped to the truck bed, which hauled them back to Fort Bragg.

The incident is under investigation, McCollum said.

Humvees are manufactured by AM General. Each vehicle weighs more than 5,000 pounds and can cost hundreds of thousands of dollars.