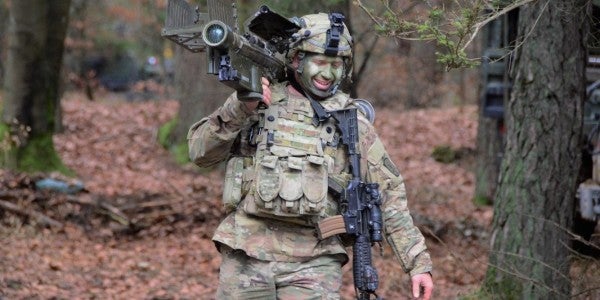 The U.S. military is shifting its focus toward preparing for great-power conflict, and on the ground in Europe, where heightened tensions with Russia have a number of countries worried about renewed conflict.

That includes new attention to short-range air-defense — a capability needed against an adversary that could deploy ground-attack aircraft, especially helicopters, and contest control of the air during a conflict.

The unit worked with 5,500 troops from 16 countries during the first phase of Combined Resolve XI, a biannual US-led exercise aimed at making US forces more lethal and improving the ability of Allied militaries to work together.

The unit outmaneuvered opposition forces, according to an Army release, taking out 15 simulated enemy aircraft with the Avengers and Stingers.

Capt. Christopher Vasquez, the commander of Battery C who acted as brigade air-defense officer for the exercise, linked his unit's performance to its experience with armor like that used by the 1st ABCT.

“It's given us some insight into how they fight, and how they operate,” Vasquez said. “The type of unit we are attached to dictates how we establish our air defense plan, so if we don't understand how tanks maneuver, how they emplace, then we can't effectively do our job.”

The second phase of the exercise, which will include live-fire drills, will take place from January 13 to January 25, 2019, at nearby Grafenwoehr training area, where Battery C is deployed.

The unit arrived in Europe earlier this year to provide air-defense support to US European Command under the European Deterrence Initiative, which covers Operation Atlantic Resolve.

During Operation Atlantic Resolve, the US Army has rotated units through Europe to reassure allies concerned about a more aggressive Russia, particularly after Moscow's 2014 annexation of Crimea and incursion in Ukraine.

Air Defense Artillery units like the 1-174th were for a long time embedded in Army divisions, but the service began deactivating them in the early 2000s, as planners believed the Air Force would be able to maintain air superiority and mitigate threats from enemy aircraft.

But the Army found in 2016 that it had an air-defense-capability gap. Since then it has been trying to correct the shortfall.

US soldiers in Europe have also been relearning air-defense skills that were deemphasized after the threat of a ground war waned with the end Cold War.

In January, for the first time in 15 years, the US Army in Europe started training with Stingers, which have gained new value as a light antiaircraft weapon as unmanned aerial systems proliferate.

Operation Atlantic Resolve rotations have included National Guard units with Avenger defense systems to provide air-defense support on the continent. (The Army is also overhauling Avengers that were mothballed until a new air-defense system is ready.)

The service also recently reactivated the 5th Battalion, 4th Air Defense Artillery Regiment in southern Germany, making it the first permanent air-defense artillery unit in Europe since the end of the Cold War.

“Not only is this a great day for United States Army Europe and the growth of lethal capability here,” Shank said at the activation ceremony. “It is a tremendous step forward for the Air Defense Enterprise.”