Yes, the Army encourages this sergeant to play video games all day (for recruiting purposes)

The purpose is to help Army recruiting by showing gamers — and there are a lot of them in the 17- to 35-year-old demographic — that they may have more in common with soldiers than they think, Jones said. 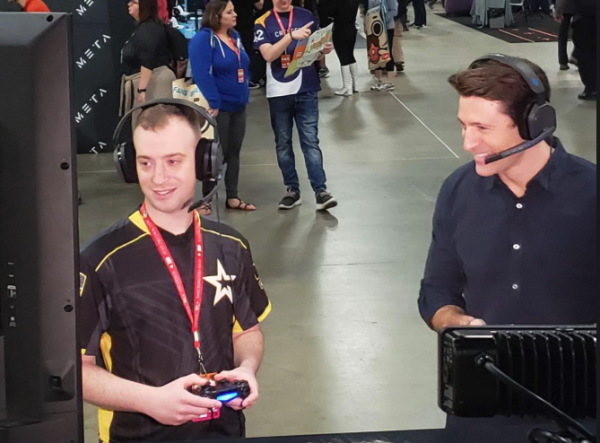 During his senior year at Woodlawn High School in 2003, Christopher Jones enlisted in the Army. As soon as he got his first barracks room following training, he bought a PlayStation2, GameCube and Xbox so he could play video games in his off time.

Sixteen years later, he's still in the Army, but video games aren't his recreation. They're his job.

Jones is part of the Army's ultimate 21st-century unit — the esports team. A sergeant first class, Jones is the noncommissioned officer in charge of 16 soldiers who, during their three-year rotation with the team at Fort Knox, Kentucky, exchange real weapons for virtual ones.

The purpose is to help Army recruiting by showing gamers — and there are a lot of them in the 17- to 35-year-old demographic — that they may have more in common with soldiers than they think, Jones said.

“We're showing the soldier behind the uniform,” said Jones, who was born in Baton Rouge and lived in the area until joining the Army. “This is that one avenue to tell that story. We hold these different positions. We have the same passion. We love gaming just as much as everyone else. The difference is we are in a different profession. We come from the infantry. We come from aviation, military police, all kinds of different professions within the Army. But we share the same passion.”

The team, which will be fully operational by Oct. 1, attends esports competitions and conventions, playing popular video games such as “Call of Duty,” “League of Legends” and “Fortnite” against those who attend, and they get to meet face-to-face. At the PAX East exhibition in March in Boston, players lined up for more than an hour to take on the Army team.

“They were blown away at the fact that our soldiers are very skilled, beating them at their favorite game,” Jones said. “Everyone had a really great time because they're connected over (an) already established shared passion.”

Jones, 34, was a recruiter in Hammond last year when the Army Family and Morale, Welfare and Recreation division had a “Street Fighter” video tournament at several installations. Because of his interest in video games, he was chosen to serve as a commentator during an event. It was successful enough that Maj. Gen. Frank Muth, commander of U.S. Army Recruiting Command, thought esports could become an effective recruiting tool. He selected Jones to manage the program. The Army is the only military branch that has a video game recruiting outreach, Jones said.

From his own recruiting experience, Jones said he thinks it's a great idea.

“When I talk about my hobbies, we start the conversation: 'I love video games,'” he said. “'Wow! The Army lets you play video games?' There's a whole lot of misconceptions that were broken by boots-on-the-ground level having that conversation.”

The Army isn't the only victim of stereotypes, Jones said. Many video game enthusiasts don't fit the mold of an undersized nerd.

In his current role, Jones oversees the program, coordinating which events the esports team will attend, attending gaming conventions and creating opportunities to raise the Army team's visibility.

“The esports industry is about to be at a $1 billion industry,” Jones said. “It's been (big) in Asia and Europe for a while, and it's really gaining steam here in North America. … Yes, it's groundbreaking. It's definitely new, but, at my level, it definitely feels like a no-brainer.”