Out of 95 soldiers who began Expert Soldier Badge, or ESB, testing at Joint Base Langley-Eustis in Virginia on Sunday, only three remain in the running to earn the Army's newest skill badge 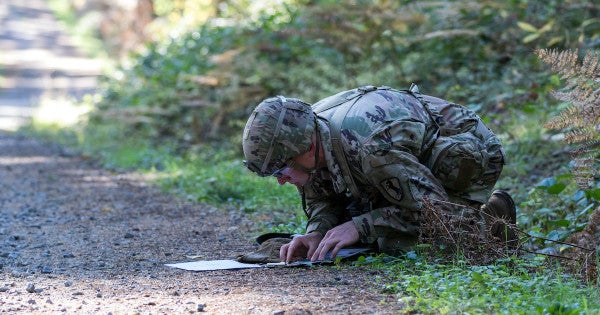 JOINT BASE LANGLEY-EUSTIS, Virginia — The Army's newest soldier skill test is proving to be a sobering reminder that many soldiers are not experts at the basic combat skills they need to survive on the battlefield.

Out of 95 soldiers who began Expert Soldier Badge, or ESB, testing here on Sunday, only three remain in the running to earn the Army's newest skill badge.

The Army Physical Fitness Test and the day and night land navigation events weeded out 59 candidates on the first day of testing. Of the 35 soldiers that started the skill lanes Monday, 27 no-goed out of testing. Five of the eight soldiers who began testing Tuesday were eliminated by 3:25 p.m.

The three soldiers that remain — one sergeant, one staff sergeant and one captain — made it through skill testing on Wednesday and are a 12-mile road march away from meeting the Army's latest measure of excellence.

“Either you meet the standard or you do not meet the standard … and that is the way it should be,” Command Sgt. Major Edward Mitchell, CSM for the Army's Center for Initial Military Training here, told Military.com Wednesday.

The ESB, which became effective Oct. 1, is designed to be a challenging battery of tasks equivalent to the Army's prestigious Expert Infantry Badge and Expert Field Medical Badge tests.

To Mitchell, the heavy attrition rate of this second round of ESB testing will make it a badge worth earning.

In addition to the APFT and land navigation events, the ESB puts soldiers through three days of tedious testing on the Army's warrior tasks and battle drills — broken down into patrolling, medical and weapons proficiency test lanes with 10 events on each lane.

Before testing began, candidates were given five days at Langley-Eustis to practice land navigation and familiarize themselves with the tasks on each test lane.

Sgt. Jessie Hocking was “no-goed” on land navigation using a map and compass, an event all candidates must pass on the first attempt.

“I didn't pass the day land-nav,” she said. “There were four points total. You needed to get correct three of those four points.”

Hocking said she “ran into trouble initially because I didn't have a pace count,” which involves knowing how many steps it takes to travel 100 meters based on an individual's stride.

“So that is where I started off wrong,” Hocking said, describing how she missed the land navigation training day.

“I was bummed, however I was glad to at least have gotten a couple of day's-worth of training on the lanes to understand what I need to train for, so when I look at the book, I can relate it back to what I learned out in the field.”

Hocking, a Minnesota Army Reserve soldier serving on active duty at Langley-Eustis as an instructor on the Amy Combat Fitness Test Mobile Training Team, is already preparing to try for the ESB again in the spring.

“I feel as though I didn't have the proper train-up for this ESB, I wanted to perform my best out here to get this experience and then I can carry that forward with the next ESB,” she said.

“I wasn't 100 percent certain that I would make it, but now that I have the knowledge and experience from this ESB, I can carry that forward to the next one and I am very confident that I will do well and get far, if not get the ESB, for the next one.”

During each of the test lanes, candidates can retest on one no-go per lane per day. If they fail the retest or another event, they are dropped from the test.

Sgt. Skyler Freeman, a military police soldier from the 3rd U.S. Infantry Regiment (The Old Guard) at Fort Meyer, Virginia, made it through six tasks on the weapons lane, but no-goed on putting an M2 .50 caliber machine gun into operation and failed the retest as well.

“The problem is most units don't have the resources for the stuff we are getting tested on here, whether it's the weapons or certain comms equipment,” Skylar said. “All three .50-cals in my unit are broken.”

Skyler said that the cadre here “were under the impression that all of the soldiers that came here were good to go” when they showed up for the pre-train week.

“I think that they realized that the Army as a whole isn't exactly as proficient on skill-level one tasks as it may seem,” he said.

Mitchell he isn't surprised that soldiers are challenged by the many of the multi-step tasks that they should be practicing on a routine basis at their units.

Serving as the sergeant major of the 2nd Infantry Division in Korea taught him that that back to basics training hasn't existed for a long time.

“What I learned is units were not preparing their soldiers on the individual tasks and battle drills like they should … because so much stuff was on the plate,” Mitchell said, describing how soldiers are too busy performing other duties and going back and forth between deployments to Iraq and Afghanistan.

“This badge is actually driving individuals back; it's making sure that every individual knows their warrior tasks and battle drills and can perform them to standard.”

Soldiers that do well on the ESB have spent time in their units putting in the training time so performing the tasks become a muscle-memory drill,” said Col. William Benner, the CIMT's chief of staff.

“What you can't do for ESB testing, just like for EIB, is not review or be proficient on the tasks,” he said. “You can't just show up for the five-day train-up and be good on all those tasks.

“I think what success looks like at this stage of fielding the ESB is noncommissioned officers saying, 'I haven't done this in a while, I am going to go back to my unit and know what I need to train on and get at it, and I'm coming back for the next one.'”

CIMT officials are recommending to commanders “start preparing your organization 120 days out” to properly prepare soldiers for the ESB, Mitchell said.