How the Army Could Improve Field Grade Command: Follow The NFL

To improve the quality of its brigade and battalion commanders, and to reduce the number of reliefs for moral and... 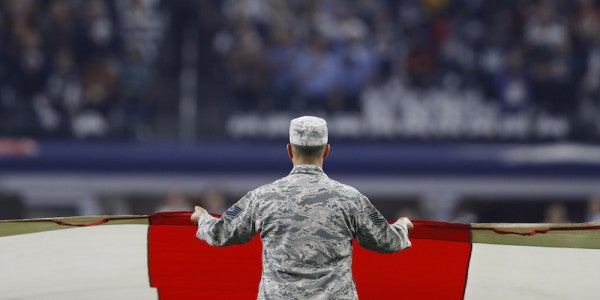 To improve the quality of its brigade and battalion commanders, and to reduce the number of reliefs for moral and ethical failings, to sexual harassment to physical fitness failures, the Army should take a page from the NFL and hold what might be called “Command Combines.”

Let me explain. Every year, late in the winter, coaches from across the National Football League host the best collegiate players in the country. The combines test athletic skills through a variety of events, which include the 40-yard dash, vertical jumps, bench press, broad jumps, and shuttle runs. Further, teams interested in specific prospects will conduct formal and informal interviews. Finally, the prospects take the Wonderlic exam to test their mental capabilities. Prior to the combines, coaches and scouts spend hundreds of hours reviewing film of the players they are interested in. Team owners pay close attention to the results of the combines, as they will invest millions of dollars in their draft choices.

Once a year, the Army convenes a board to determine who will have the privilege to command battalions and brigades. This privilege confers the responsibility for thousands of soldiers, millions of dollars of equipment, and performance in combat. Moreover, battalion and brigade commanders hold UCMJ authority, meaning they can deprive a soldier of their freedom, and fine them thousands of dollars for breaking the law.

The primary weakness, or vulnerability of our current system, is that a centralized board selects commanders based on a topical look at the officer, considering only their photo, officer record brief (ORB), and the documents in their official military personnel file (OMPF). Simply put, the process for choosing battalion and brigade commanders is incomplete. In a profession on which so many lives hang, we have a duty to do more to identify the people best qualified to lead our formations, and this should only be done through a thoughtful and thorough process. Such a process would serve as an investment in the quality of our Army and the security of our nation.

A secondary weakness is the lack of transparency. Actual criteria for command selection is often hidden from the public view in “special instructions” to the board. This keeps it out of view and free from scrutiny and criticism. A command combine would put selection into public view.

The command combines would consist of multiple physical and academic events. These events include physical fitness, a written exam, a writing sample, an ethics evaluation, and an interview. The cumulative results of these events would then formulate the order of merit for who will command. Further, the results would assist in choosing who is best suited for what type of command (operational, institutional, garrison, etc.). Here is a list of command combine events in no specific order.

The interview. This part of the combine is what makes a selection board an actual board. Just as aspiring non-commissioned officers must sit in front of a group of senior NCOs, so should officers aspiring to command battalions and brigades. The board would consist of post-command colonels and general officers. Other members of the board could include senior-level civilians such as Deputy Assistant Secretaries of the Army (ASA) or deputy under/assistant secretaries of defense (DUSD/DASD). The board would be charged with asking questions ranging from “Why do you want to command?” to questions involving ethical dilemmas, to questions on when it is appropriate to violate an Army policy or to bend a regulation. Civilians on the board would enhance the ability to discuss civil-military relations, and to bring questions up from the tactical to the operational and strategic level.

The written exam. Each officer should take a written exam that tests knowledge on doctrine and tactics. The written exam can and should have a portion tailored to each specific branch. The exam would have a general portion that tests knowledge on legal matters, SHARP and equal opportunity. Further, the general portion of the exam would test strategic knowledge? In a basic way a battalion commander should be able to describe how his actions fit within the current strategic framework (National Security/Defense/Military Strategy). Further, each branch or Center of Excellence would develop a portion of the exam to test tactical knowledge such as the latest infantry, military police, or sustainment TTPs, doctrine, and concepts.

The ethics evaluation. This portion of the combine would challenge every officer in how s/he would handle ethical dilemmas. Each officer would be presented with a case study, and then present to the board how they would respond. Further, each officer would have the requirement to defend his or her position. There would be no correct answers to the ethical portion, and this would resemble the Kobayashi Maru training exercise depicted in the sci-fi series Star Trek.

The essay. Battalion and brigade command are the stepping-stones to senior leadership in the Army. Every officer aspiring to this level needs the ability to communicate through writing. Topics could include a leadership, training, or command philosophy. Further, candidates for highly competitive commands could write an essay stating why they are best qualified for this specific command.

There are multiple challenges of holding a command combine. This can include logistics, sheer numbers of personnel, selecting who will evaluate, objective vs subjective ratings. However, there are ways and means to overcome each obstacle. Indeed, there is precedent in the way the Army selects members who look to serve within units such as the 75th Ranger Regiment.

In terms of accommodating the large number of officers who are competitive for command, the Army can easily reduce the burden. First, the only officers to attend the combine will be those selected by the centralized board. However, the board will not select who is a primary, who is an alternate. Moreover, the board will not select the type of unit assignment (e.g. operational, institutional, etc…) for select officers. The command combine results will determine ranking and assignment.

Secondly, the command combines do not need to occur in a central location such as Fort Leavenworth. Each respective Center of Excellence can host their own combine. This will ensure eight hundred competitive senior majors do not converge at Fort Leavenworth simultaneously.

Sitting through an interview before a board will certainly bring greater elements of subjectivity to the selection system. Further, some individuals may not perform well in interviews. Such is life. A random stroll through a Starbucks on any given day will provide a window into other members of society interviewing for jobs, often with less responsibility than commanding a 5,000 person Brigade Combat Team.

Implementing a command combine will not replace the current command selection system in its entirety. A formal board that reviews prior performance would still occur as the first step to cull the numbers eligible for the combines. This would place a high value on 15 – 20 years of service and evaluations, reducing the risk of a 5-day combine masking a previously established reputation. Indeed, a command combine would improve the current system through a more robust system of evaluating a leader’s knowledge, skills, and abilities. The command combines would improve the talent management system already in place.

As the Army transitions to IPPS-A, which promises to enhance talent management by identifying traits and qualities that affect an individual's ability to perform in a future assignment, it stands to reason that it would develop a command selection system that does the same. Adopting a command combine to evaluate who will take command is the next step in the evolution of evaluating and developing agile, adaptive, and innovative leaders.

LTC Dan Sukman is an Army Strategist (FA59) assigned to the Joint Enabling Capabilities Command in Norfolk Virginia. He has served previously with the 101st Airborne Division, U.S. European Command, and the Army Capabilities Integration Center. His combat experience includes multiple tours to include both Iraq and Afghanistan. Check out his blog TheDecisivePoint.org and Follow him on twitter @dansukman . This article represents the author’s views and not necessarily the views of the U.S. Army or Department of Defense.