The Army has already secretly fielded its lighter, stronger helmet to a handful of lucky soldiers

In late September, the Army secretly fielded a small number of helmets that offer increased protection against high-performance sniper rounds 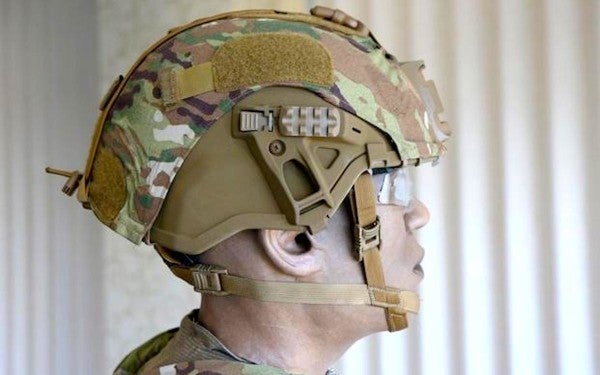 In late September, the Army secretly fielded a small number of helmets that offer increased protection against high-performance sniper rounds.

The first generation of IHPS weighs about three pounds, in size medium, but to get to a “classified level of protection against higher-level threats, what we had to do for our soldiers is put another two-pound applique on the top of the helmet,” Potts said.

“Soldiers don't particularly like the fact that they have five pounds on their head, but if you are traveling through urban areas or areas where there is a known sniper threat, our soldiers are willing to put the additional applique on for at least a period of time,” he added.

But Army scientists at the Army Natick Soldier Research, Development and Engineering Center have developed a new process for molding the polyethylene helmet material that reduces its weight by up to 40%, Douglas Tamilio, director of the NSRDEC, told reporters.

The new process allowed manufacturers to produce an IHPS helmet that offers the same ballistic protection without the additional applique.

The Army is working with defense companies to produce more of the new design, Potts said.

“We have done enough testing to know that it absolutely meets the current level of threat, but we also know that it exceeds that,” Potts said. “Now, it's about getting more companies that can actually press that mold. So, once that goes out, we will no longer field that applique for those IHPS helmets.”