At The New Army Futures Command, Soldiers Loosen Up As They Search For Innovation

Jose La Torre's first day at the U.S. Army's newest hub was unlike any other he'd experienced. At a typical... 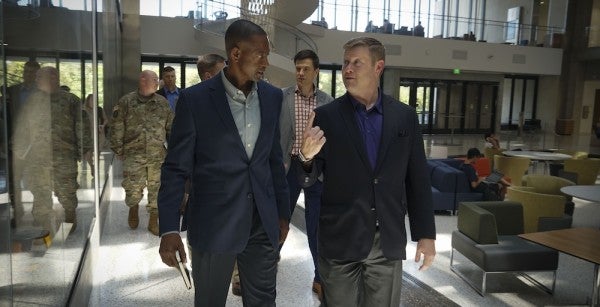 Jose La Torre's first day at the U.S. Army's newest hub was unlike any other he'd experienced.

At a typical Army post, which La Torre has become familiar with in his 22 years of service, he is used to driving past barricades to enter the facility. He is used to wearing the same Army uniform daily, and being directed at every step by superiors whose uniform branding indicates who they are and what rank they hold. First-name basis is off limit.

But when La Torre drove up to the Army's new post at the University of Texas System building in the middle of downtown Austin on Sept. 10, there were no barricades. No guarded security clearances. Nobody to meet him and tell him where to go when he parked his car.

Inside, he found Army personnel dressed in polo shirts and khakis, working inside cubicles.

“It's a big difference,” said La Torre, 41, who is a driver for the hub's leader, Gen. John Murray, and was previously stationed at Fort Leonard Wood in Missouri. “I'm having to wrap my mind around things that are implied in a usual military installation are not necessarily the same way here. It's not what we're used to.”

It's been four months since the Army debuted its Futures Command, a facility aimed at developing new military technologies alongside private tech companies in Austin and elsewhere. In that time, staff members who have long worked in the rigorous, highly-regulated Army system have had to adjust to the new arrangement, as well as a completely different city culture.

When the Army this past summer chose Austin as the site for the Futures Command, officials said the hub would operate unlike any other military branch. To reach its goal of building cutting-edge tech in an accelerated timeline, Army officials said the facility would have to blend in with the high-tech culture here.

So the Army set up its Futures Command to operate like a company.

At the typical Army post, service members work and live in an ecosystem entirely composed of Army personnel. It's a world where daily necessities — grocery stores, medical centers, gyms — are found within the confines of the base.

Schedules are regulated: Early wakeup calls followed by daily fitness routines, scheduled lunches and regimented work itineraries. Members typically keep only three uniforms: Their work-out gear, a camouflage uniform and a dress uniform. They follow orders that direct them exactly how to accomplish a task and take the chain of command even more serious than the typical job place.

“Because we are building the unit, we have to set all of the expectations from the ground up,” said Luz Person, a 42-year-old human resources employee who has served in the Army since 2008 and was previously stationed at Fort Sam Houston in San Antonio. “This is the first unit built like this.”

At the Futures Command, military personnel don't follow a strict dress code and call each other by first names, not rank titles. They don't have scheduled workouts, and they mingle each day with the numerous civilian workers who are employed at the university. Their position titles are also typical of those found at a company: human resources, logistics, spokespeople, instead of the long-winded military position names at other bases (sergeant first class, etc.).

They live in suburban homes and work at an office surrounded by a busy downtown scene, with cranes swinging near their work stations on the 15th and 19th floors and restaurants, bars and other downtown services within walking distance. Besides a Futures Command flag, there is little Army branding inside the workspace. Many employees there are still active-duty service members, but there are no soldiers training and preparing for deployment.

“We've found that there are a lot of food trucks around,” said La Torre of encountering Austin's culture, which has included downtown walks by him and other Futures Command personnel to see the city's touted night life, street art, food scene and hipster vibe. In drives around town, La Torre said he has also experienced the city's infamous traffic, as well as the natural beauty that helped attract the Army to Austin.

It's the less-palpable changes, however, that represent some of the largest shifts from the usual Army code, said Stan Ellison, a 42 year-old logistics worker who has served in the Army since 1996 and was previously stationed at Fort Riley in Kansas.

That includes local networking and business events in which the Army has taken part. One was a hackathon at downtown tech hub Capital Factory, where the Army also has a space. Another was a Greater Austin Chamber of Commerce gathering to discuss economic trends in Austin — not the typical Army-attended function.

The Army has also hosted panels at Capital Factory for tech startup companies and has met with local Venture Capital firms to learn the ins and outs of the tech scene, according to Murray.

“At the Futures Command, military personnel don't follow a strict dress code and call each other by first names, not rank titles.”

The military wants its new post to be so different that it makes new staff members take a workshop that aims to teach and encourage them to think freely and creatively, Ellison said.

“Usually, decision-making flows to one person,” he said. “Here, they are more interested in a collaborative environment and are interested in more people's ideas before making decisions. We're trying to not be as stringent as a normal unit would operate while still trying to stay in compliance.”

The Futures Command now employs about 100 part-time and full-time workers, according to spokesman Col. Patrick Seiber. Roughly three-fourths of staff members are civilian workers, the percentage the Army has said it will employ as it scales its workforce. The command is also still in the process of folding other military wings that deal with innovation under its branch.

The Army plans to staff around 300 people by the summer time, Seiber said, and could eventually reach 500.

The Army has said some of the command's first projects could include building sunglasses for soldiers with night vision, GPS and other computer capabilities. It has not yet said which companies it might work with.

Staff members say there have been some challenges in building the new command.

Because the facility is within the confines of a public university, there have been obstacles to making sure computers and other devices maintain military-grade security. The Army is in the process of creating a secure communication room within its 19th-floor office.

While service members have mostly shown a positive response to their new system, officials said that won't be the case with everyone who enters the workplace.

There will be military personnel who won't be comfortable with the more laid-back and creative culture.

“This command is not going to be for everyone,” said La Torre, the general's driver. “Some soldiers might not understand.”