The Army’s gang problem is getting worse 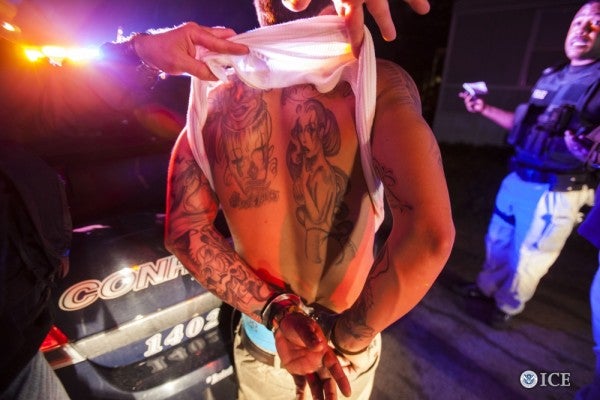 The most recent report from the Army on street and outlaw motorcycle gang activity in the ranks shows both trending upward, while incidents of domestic extremism remain roughly constant.

An internal report, obtained by Military.com through a Freedom of Information Act request, shows that gang members were tied to dozens of Army felony law enforcement reports and more than 100 criminal investigations in fiscal 2018, the latest year for which data is available.

While these reports and investigations make up less than 1% of all Army law enforcement incidents, the new report shows that the little-discussed problem of military gang activity continues to be a headache for base commanders and other service leaders.

The Gang and Domestic Extremist Activity Threat Assessment from Army Criminal Investigation Command, or CID, is a regular report compiled at the behest of Congress.

In fiscal 2018, the report found 83 law enforcement reports across the military with known or suspected gang or domestic extremist member involvement, a 66% increase from the previous year.

That increase holds true across categories: Street gang activity shows a 68% year-over-year increase, from 38 to 64 incidents, while outlaw motorcycle gangs had a 60% increase, from 10 to 16 incidents. Domestic extremist events remained few, increasing from 2 to 3 year over year.

While the report does not offer reasons or explanations for those increases, it does offer some insights into current gang trends. Gang members increasingly communicate with each other on social media platforms ranging from SnapChat to TikTok, and have become more diverse, with “female gang associates [serving] in increasingly active roles in gang-related crimes.”

Gangs are also becoming less centralized. The report cites the Texas Department of Public Safety, saying that “many young gang members are relinquishing traditional gang structure and rules, opting for less organizational oversight and the freedom to serve in roles of self-interest.”

In the Army, the gang-related crime investigations ran the gamut from murder to absences without leave; in some cases, the suspected gang member was actually the victim in the crime.

The 64 investigations involving street gangs included suspected members of 26 different gangs scattered across the U.S., according to the report. In total, 31 soldiers were identified in those investigations.

In addition, the report states, there were 116 criminal intelligence reports in fiscal 2018 regarding Army street gang activity, a dramatic 87% increase from the previous year. Within those reports, 58 of the subjects identified were soldiers.

Outlaw motorcycle gangs, or OMGs, which had a 33% increase in overall violent activity from 2017 to 2018, saw the most Army-connected activity in Texas. Eight of 16 total OMG incidents tracked by the Army took place at Fort Bliss and Fort Hood, with popular clubs including the Akah Manah, Bandidos, Cossacks, Kinfolk, Mongols, Outcasts and Thug Riders. In the OMG investigations, nine active-duty soldiers were identified.

“The Army is concerned about soldiers who join OMGs or their support clubs because they typically join these groups after they have been in the military for several years, are of higher rank, are more mature, and tend to be leaders (informal or formal) who can influence younger soldiers,” the report states. “These soldiers are more likely aware of DoD policy regarding membership in criminal organizations.”

Of the three domestic extremism events, one involved a soldier: a U.S. Army Military Academy cadet caught with guns on school grounds who was found to have in his possession additional weapons and an apparent hit list. That cadet was court-martialed in June 2018 and sentenced to 15 months' confinement and dismissal, the report states.

There were 31 additional criminal intelligence reports linked to domestic extremism groups, up 24% from the previous year.

While rare, violent gang activity does take place on military bases. The report describes a previously unreported July 1, 2017, incident in which military police at Fort Bliss were responding to a call about a fight when they heard shots being fired from a shotgun, large-caliber rifle and semi-automatic pistols.

The gunfire exchange was determined to be between members of the relatively new Kazi gang and its rival, the Vice Lord Gang.

While no one was hurt, seven Kazi members were arrested, with charges including assault with intent to murder.

In recent years, other Kazi incidents involving soldiers have been reported. In November 2019, a suspected Kazi member accused of fatally shooting a Fort Bliss soldier and wounding others was arrested; in June of this year, Kazi gang members reportedly assaulted another Bliss soldier over the color of his bandanna.

Officials with Army CID did not provide responses to Military.com queries about the gang report or provide updated numbers by deadline.

But Dr. Carter Smith, a retired Army CID special agent who has written extensively about military gang activity, said the Army should do more to assess why certain trends are observed in the gangs report — such as a steady increase in street gang activity.

“You see trends, but they're unexplained trends,” Smith told Military.com. “A snapshot without previous analysis is kind of irrelevant.”

The military has gang problems simply because it's a microcosm of the surrounding society, he said. While military background checks aim to root out candidates who have a history of criminal gang activity, they don't find those who have never been caught. Many gang members join the military as a way out of gang life, Smith said; more dangerous are those who serve their military time and then return to criminal activity.

“Even if they were just making bread for the military, they learned soldiering,” he said. “You elevated them to organized crime status.”

Related: Deported To Mexico, US Veterans Are Pressed Into Service By Drug Cartels

Domestic extremism within the military has gotten the attention of Congress with several high-profile investigations into service members' activities and the apprehension and trial of a Coast Guard lieutenant who espoused supremacist ideologies in writing and was accused of having a list targeting political leaders. Smith said he has never seen significant numbers of domestic extremism-related Army incidents in his years of tracking the data.

But he did say he wants the Army to produce a more comprehensive, longitudinal survey that probes the reasons behind trends in gang and extremist activity. He also said the service could be more consistent in investigating these kinds of incidents.

“Scotland Yard has a saying: 'You don't look, you don't find,'” Smith said.