Army four-star general: talking about racial injustice was like learning ‘a new language’ for the military

"In my opinion, I've been doing this for 38 years, the topic of race in the military has been considered taboo, something we just don't talk about" 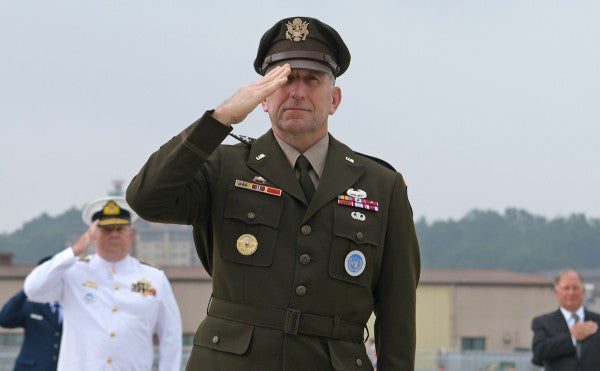 Following the implementation of the Defense Department's plans to address its gaps on matters of “diversity, inclusion, and equal opportunities,” the commander of U.S. forces stationed in South Korea offered a compelling reason for the changes, and highlighted of the difficulties in implementing the newfound approach.

During an interview on the military's Armed Forces Network, U.S. Army Gen. Robert Abrams, the commander of United States Forces Korea (USFK), reiterated that the composition of the U.S. military mirrored America's society, and that its problems and solutions needed to be taken into account.

“I think what's obvious, is the death of George Floyd, the tragic murder … really brought out to form this racial tension and racial divide in our own country,” Abrams said. “And our military is not exempt from that. I don't want to say that was the straw that broke the camel's back, but it certainly highlighted all of us. It was intensely personal for me and for many of our service members.”

As protests demanding police reform swept across the U.S. in late May after the death of George Floyd, the U.S. military implemented policy initiatives to “promote the morale, cohesion, and readiness of the force,” according to a memo by Defense Secretary Mark Esper.

“As a military, we succeed by working together, hand in hand, side by side,” the July 14 memo said. “Diversity and inclusivity in the ranks are not merely aspirations, they are fundamental necessities to our readiness and our mission success.”

Abrams, who toured U.S. military bases across South Korea for updates on the initiative, discussed some of the difficulties in developing solutions to a social problem that was “really impacting our formation.”

“Fundamentally, this is about changing people's behavior and really embracing our core values where everyone is going to get treated with dignity and respect, regardless of race and gender,” Abrams said.

“We've had to learn a new language,” Abrams added. “People started talking about 'micro-aggressions' — that's a fifty-cent word for using subtle criticism of someone based on potentially the color of their skin or their gender … just making snarky remarks that actually cut to the bone and are completely unnecessary.”

U.S. Army Sgt. Maj. Walter Tagalicud, USFK's senior leader, said “it was very difficult for them to just open up and talk about it.”

Beyond the discussions on a unit-level, Abrams said the U.S. military was also taking a “deep dive” look into reviewing the demographics of its courts-martial — just as civilian courts in the American society have been criticized for glaring racial disparities.

“We have got to do a better job,” Abrams said.

The Defense Department's broader initiative will implement several immediate steps to confront unconscious bias within its ranks, including banning photographs from a service member's promotion packet. Other long-term plans include additional training to address bias awareness and bystander intervention; pregnancy-based discrimination; and hairstyle and grooming policies.