Maj. Gen. Ryan Gonsalves’ nomination for a third star has been pulled in the wake of an Army Inspector General’s... 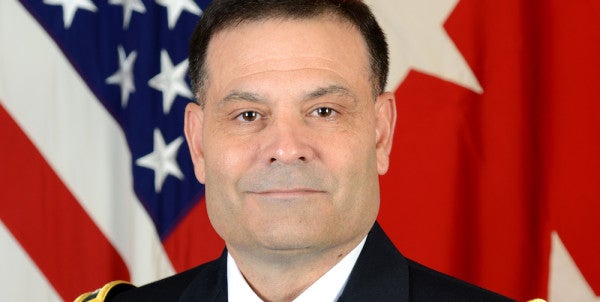 Maj. Gen. Ryan Gonsalves’ nomination for a third star has been pulled in the wake of an Army Inspector General’s probe that found he disrespected a female congressional staffer when he called her “sweetheart.”

A report of the investigation into the incident was provided Friday to Stars and Stripes and determined the “preponderance of the evidence” indicated Gonsalves referred to the staffer as “sweetheart” during an October 2016 meeting.

As a result, Gonsalves violated Army Command Policy, which requires treating others with “dignity and respect,” the investigation concluded. The IG recommend the report be referred to the Judge Advocate General for “appropriate action.”

So far, the Army declined to detail what the future holds for Gonsalves, who led the 4th Infantry Division until August but is now serving as a special assistant to the commanding general, III Corps at Fort Hood, Texas.

In July, Gonsalves was nominated for a third star, but his nomination was formally withdrawn Nov. 27.

An anonymous complaint against Gonsalves was made to the IG on July 20, days after Gonsalves’ nomination and one week after Stars and Stripes reported he was in contention to serve as the next commander of U.S. Army Europe.

According to the IG report, Gonsalves' pending nomination for a third star prompted an angry reaction from a staffer of Rep. Jim Langevin, D-R.I.

The Army IG report redacted the names of the female congressional staffer and about 10 other people who were present during the October 2016 meeting at Fort Carson, Colorado. The report included testimony from members of Gonsalves’ staff who took part in the session.

The complaint cited accusations that Gonsalves took issue with the female congressional staffer’s youth, and that the general said she should take detailed notes on why the military needed funding “since she was a Democrat and did not believe in funding the military,” the IG report stated.

At one point during the meeting, the female staffer passed a note to a colleague that read: “Did this guy really just call me sweetheart?,” the report states.

Accounts of the meeting differed, however. Some people in attendance defended Gonsalves, saying he acted professionally, though their names and positions were redacted from the report.

The IG report cites another allegation that Gonsalves asked the staffer her age. When she responded, Gonsalves spoke about his time as a young Army officer serving along the Fulda Gap during the Cold War. Gonsalves is then accused of telling the staffer to take notes so her “Democratic boss” would understand the military’s needs, according to the report.

The meeting was focused on the Army’s growing mission in Europe and the need for more consistent funding in light of concerns about a more aggressive Russia.

The IG report also cited statements that after the meeting with Gonsalves, the staffer informed her boss — Langevin — but she declined to file a complaint at the time.

After the Stars and Stripes report about Gonsalves’ possible nomination to command USAREUR, the staffer posted statements on Facebook critical of the general and said the Army was making a “bad decision,” the IG report states.

“Although MG Gonsalves testified that he did not refer to (the female staffer) as ‘sweetheart' during the meeting, the evidence did not support his recollection,” the IG report states.