The Army has made it easier for Sikhs and observers of other religions to serve in uniform while upholding the... 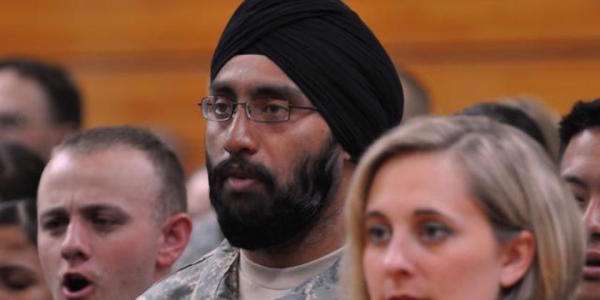 The Army has made it easier for Sikhs and observers of other religions to serve in uniform while upholding the tenets of their faiths by simplifying the process to receive a religious appearance accommodation.

Brigade-level commanders now must grant religious accommodations to any soldier seeking to wear a religiously mandated beard, turban or Muslim hijab while in uniform with only a few exceptions, Army Secretary Eric Fanning wrote Tuesday in a memorandum. Previously such uniform exemptions had to be approved by the secretary.

“The soldier’s brigade-level commander will approve a request for a religious accommodation …unless the commander determines the request is not based on a sincerely held religious belief, or identifies a specific, concrete hazard that is not specifically addressed in this directive and that cannot be mitigated by reasonable measures,” Fanning wrote, noting the new policy would be added to Army Regulation 670-1, which defines the Army uniform appearance standards.

The Army has granted several Sikh soldiers temporary appearance waivers in recent years to wear neatly groomed unshorn beards and hair under a turban while serving in uniform. Those waivers were applied on a case-by-case basis, and most of them were granted only after the soldiers filed lawsuits seeking their uniform exemptions.

The new accommodations will be made permanent for soldiers throughout their careers once granted by their brigade-level commander, Fanning wrote in the memo issued in the final weeks of his tenure.

“While we still seek a permanent policy change that enables all religious minorities to freely serve without exception, we are pleased with the progress that this new policy represents for religious tolerance and diversity by our nation’s largest employer,” said Harsimran Kaur, the coalition’s legal director.

Sikhs fought in the Army during both World Wars, the Korean War and in Vietnam, but few Sikhs have served in recent decades because of a 1981 policy mandating they cut their hair and beards.

Sikhism is a monotheistic religion that emerged in what is now India and Pakistan in the 15th century. Sikhs believe resistance to oppression is a religious duty, and military service was considered the highest honor for young Sikh men.

Army officials have said previously their main concerns with allowing Sikhs and other soldiers to wear beards is the interference facial hair can have with properly wearing a gas mask. Nonetheless, the Army has granted more than 50,000 permanent medical exemptions since 2007 to allow soldiers to wear beards. Some special operations commanders have also authorized their troops to wear beards and long hair in combat in Iraq and Afghanistan.

In his memo, Fanning acknowledged some advancements in gas mask design have shown promise in protecting individuals with beards, but he added “further research, development, testing, and evaluation are necessary to identify masks that are capable of operational use and can be adequately maintained in field conditions.”

Last year, Army Capt. Simratpal Singh, one of the Sikh soldiers granted a temporary appearance waiver, told Stars and Stripes that his beard had not caused him any problems with wearing a gas mask.

The West Point-educated veteran of the war in Afghanistan said he had passed standard gas mask and helmet evaluations with his unit at Fort Belvoir in Virginia, including going through a tear gas chamber.

Sikh soldiers who wear unshorn beards and hair must wear them in “a neat and conservative manner that presents a well-groomed appearance.” They must role their beards to a two-inch length limit in garrison and a one-inch length for field training, physical training or when deployed. Their hair cannot fall their ears or eyebrows and must not touch the collar of their uniforms.

“An Army with Sikhs is an even stronger Army,” said Eric Baxter of Becket Law, which represented several Sikh soldiers. “Sikhs have a history of heroic service in militaries around the world — including in the United States until about thirty years ago. Now their strength will be added back to the Army without the threat of forced shaves and haircuts.”