Two more people, including a Colombian citizen, have been indicted on charges related to an alleged cocaine smuggling scheme involving... 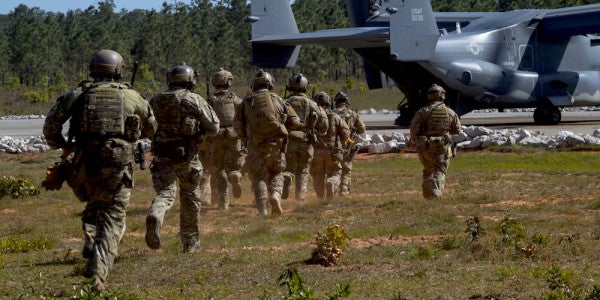 Two more people, including a Colombian citizen, have been indicted on charges related to an alleged cocaine smuggling scheme involving a 7th Special Forces Group (Airborne) soldier who reportedly tried to get nearly 90 pounds of cocaine into the United States from Colombia.

Federal grand jury indictments handed down last week charge 24-year-old Colombian Gustavo A. Pareja and 35-year-old Henry W. Royer of North Carolina with conspiring to possess and distribute cocaine with “reasonable cause to believe that such a substance would be unlawfully imported into the United States from a place outside thereof.”

Neither of the men are soldiers, according to Lt. Col. Loren Bymer, spokesman for the U.S. Army Special Operations Command.

Gould had originally been scheduled to go to trial in November, but an October order from Senior U.S. District Judge Roger Vinson moved the trial to January. Jury selection is scheduled to begin Jan. 7.

According to court records, Gould's initial appearance on the charges, during which he was expected to enter a “not guilty” plea, was scheduled for Tuesday in federal district court in Pensacola.

The U.S. Drug Enforcement Administration has led the investigation into the alleged cocaine smuggling with help from the Army's Criminal Investigation Division, Colombian authorities and the U.S. Attorney's Office for the Northern District of Florida.

Anne-Judith Lambert, spokeswoman for the DEA's Miami office, said the agency would not comment on what she characterized as an ongoing case. Lambert said Tuesday that she was not aware of the additional indictments.

Like Lambert, authorities have been tight-lipped as the investigation has proceeded and indictments have been handed down. However, some details of the alleged smuggling have emerged since reports began to surface in August.

Gould reportedly was detained by U.S. authorities Aug. 13, after two “heavy bags” filled with nearly 90 pounds of cocaine were intercepted at the U.S. Embassy in Colombia. The “heavy bags” — cylindrical punching bags used by athletes — reportedly were bound for an aircraft heading to Eglin Air Force Base, headquarters for the 7th Special Forces Group (Airborne).

The bags were intercepted by another Special Forces soldier who reportedly became suspicious about their contents. The cocaine was discovered after the bags were X-rayed by Colombian officials.

Colombia is part of the 7th Group's area of responsibility, but Gould had been on vacation — not on military duty — before the discovery of the bags. He already was back in the United States when the bags were intercepted.

Gould, Royer and Pareja could face sentences ranging from10 years to life in prison on each of the two charges.

SEE ALSO: That Army Special Forces Soldier Busted For Drug Smuggling May Be Part Of A Larger Ring