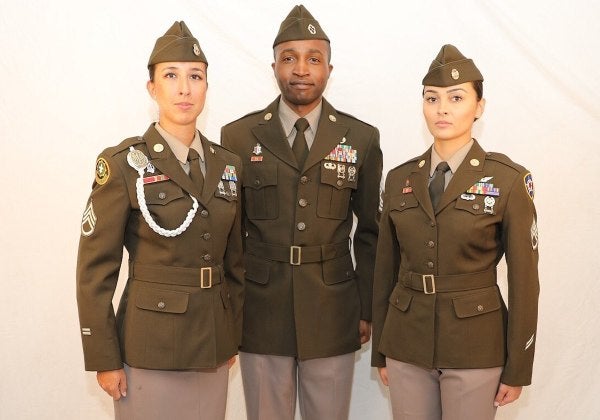 The Army had originally planned to begin issuing the uniforms at entry-level training locations before Oct. 1, but setbacks during production related to COVID-19 forced a delay in the rollout process, Lee said.

In addition to new soldiers, the Army “prioritized recruiters and drill sergeants, because they serve as the face of the Army,” Lee said.

Soldiers attending the Army's Recruiting and Retention College at Fort Knox, Kentucky, started to receive their Army Greens earlier this month in an effort to ensure all recruiters are issued the uniform starting in November through April 2021, according to the release.

Army senior leaders approved the new uniform for everyday wear in late 2018 as a replacement for the blue Army Service Uniform (ASU) after deciding that the blue ASU is often too formal for everyday business use.

“For the past year, I've been wearing the [Army Greens]; wherever I go, people tell me that they love the uniform,” Army Vice Chief Of Staff Gen. Joseph Martin said in the release.

“As we transition to the next phase of the rollout, I'm excited for the soldiers who are about to receive the uniform. I think that when they see themselves in the mirror, they'll feel connected to the soldiers of the past and realize that they're writing the next chapter of what people feel about our Army.”

Related: These soldiers are the first to receive the Army's new 'pink and greens' uniform

The Army decided not to require soldiers to have the new uniform until Oct. 1, 2027, an extended phase-in period intended to give enlisted soldiers more time to save up their annual clothing allowance to buy the new uniform.

But the Army and Air Force Exchange Service is moving ahead with plans to supply the new uniform through a wave-based rollout approach, Lee said, who added that the AGSU is currently available for purchase at the Fort Knox AAFES location.

The majority of AAFES locations within the U.S. are expected to have the new uniform by December, according to the release. Stores in Alaska, Europe, Japan, and South Korea, along with National Guard and Reserve military clothing locations, should have a supply of uniforms by February 2021.

“Soldiers are enjoying this new uniform, and they are eager to go out and get it,” Lee said. “We can't get it to them fast enough.”

PEO Soldier officials are currently conducting limited user testing and evaluations which are slated to last through May 2021, Lee said.

As more soldier feedback is collected, program leads plan to make changes to the uniform “to accommodate different body types or make improvements to the product's longevity,” according to the release.