He and the victims wife communicated with each other over Snapchat because they thought the app's temporary messages would be untraceable by police, prosecutors said 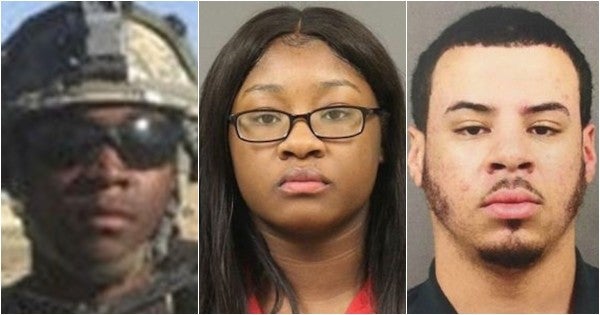 BERRIEN COUNTY, Mich. — The man charged in the death of his lover's husband, a U.S. Army sergeant, pleaded guilty this week to murder.

Cuellar and Kemia Hassel, the victim's wife, were both charged with murder for their roles in Hassel's killing. A police investigation into the sergeant's death revealed an affair and a plot to kill the husband.

Hassel was found guilty by a jury at trial in Berrien County Trial Court Thursday, July 18, of first-degree premeditated murder and conspiracy to commit murder. Hassel will face a statutory minimum sentence of life in prison without the chance for parole for the December murder of her husband, and faces sentencing in the court at 11 a.m. Aug. 29.

Cuellar was scheduled to face trial on charges of first-degree, premeditated murder and conspiracy to commit murder in Berrien County Trial Court starting Aug. 12, Pierangeli said. Instead, the man pleaded guilty Monday to a lesser charge of second-degree murder.

As part of a plea agreement with Cuellar, Pierangeli said, the prosecutor's office will recommend a minimum sentence of 65 years in prison.

Though Cuellar pleaded guilty to a lesser charge than he would have faced at trial, the resolution of the case was “very just,” Pierangeli said. The 25-year-old will be 90 years old when he is eligible to get out of prison, he said.

“It's essentially a life sentence,” Pierangeli said. “We weren't going to accept anything less.”

But avoiding trial meant the victim's family would not need to go through the emotional turmoil again, he said.

The husband and wife, as well as Cuellar, were all in the military and stationed together at Fort Stewart in Georgia. Over the holidays, when the killing occurred, the couple was back in Michigan visiting Hassel's family near St. Joseph.

On the night of the murder, the victim and his wife were staying with his father in St. Joseph Township.

Hassel was at a family gathering in Benton Harbor Dec. 31, 2018, and returned to his father's home at about 11 p.m. to bring his wife some food, police said. He was confronted there by an assailant who shot and killed him.

Pierangeli said Kemia Hassel's statement to police, a recorded phone conversation with her mother from jail where she confessed and records of Snapchat messages between her and Cuellar were among major pieces of evidence presented at trial earlier this month.

St. Joseph Township police officer Mike Lanier testified during the preliminary examination that Hassel admitted to planning the killing. According to Lanier's testimony, Hassel said “yes” when questioned by police about whether she planned her husband's death, if the plan began months before and whether money was a motivator for the murder.

Hassel admitted to a sexual relationship with Cuellar, Lanier testified, and told police she had been unhappy in her marriage but that divorce was not an option because then she would not get any life insurance money.

Hassel and Cuellar communicated with each other over Snapchat because they thought the app's temporary messages would be untraceable by police, Lanier testified.

Cuellar and Hassel began making their plans while deployed in Korea between February and October of last year, Lanier testified.