Comparing more than 263,000 active duty Army personnel to nearly 5,000 civilians, researchers found that soldiers were more likely to have high blood pressure and just as likely to have a higher than ideal body mass index (BMI), according to the report in the Journal of the American Heart Association 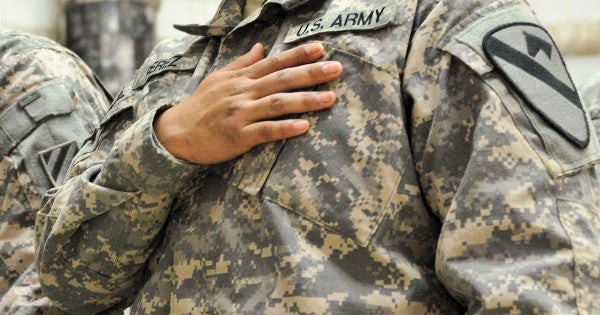 Comparing more than 263,000 active duty Army personnel to nearly 5,000 civilians, researchers found that soldiers were more likely to have high blood pressure and just as likely to have a higher than ideal body mass index (BMI), according to the report in the Journal of the American Heart Association.

“We were surprised by the results,” said lead author Loryana Vie, senior project director of a long-term collaboration between the U.S. Army and the University of Pennsylvania. “They were contrary to what we were expecting going into the study because of the Army's health screening and emphasis on physical fitness.”

Ultimately, Vie said, the take-home message isn't just that soldiers have worse heart health than civilians, but rather that there is “so much room for improvement for everyone,” she said. “There is an opportunity to improve the health of the whole country.”

To look at heart health among soldiers and civilians, Vie and her colleagues turned to 2012 data from the Army's Periodic Health Assessment, which monitors service members' medical readiness to deploy. They obtained medical records on 263,430 active duty personnel, ages 17 to 64.

Data on the 4,797 civilians came from responses gathered in 2011 and 2012 by the National Health and Nutrition Examination Surveys (NHANES) conducted by the National Center for Health Statistics.

The two groups were evaluated on how well individuals met the ideal on four criteria: current tobacco smoking, BMI, blood pressure and diabetes, which represent four of the seven health factors and behaviors that correspond to the American Heart Association's definition of ideal cardiovascular health. Individuals were rated on each factor as ideal, intermediate or poor, depending on how well they fit the association's criteria.

Overall, a greater proportion of active duty Army personnel met the ideal criteria for smoking and diabetes than civilians, though the difference in smoking was small. The biggest difference between the groups was in blood pressure. Just 30% of soldiers had an ideal blood pressure compared with 55% of civilians.

Although the proportion of soldiers and civilians with ideal BMI was comparable, this was unexpected because of the regular exercise Army personnel get, said the study's senior author Dr. Darwin Labarthe, a professor of preventive medicine at Northwestern University's Feinberg School of Medicine in Chicago.

The blood pressure and BMI findings are especially concerning because these factors are so much lower at recruitment, Labarthe said. “We need to find out what it is that accelerates the development of high blood pressure and obesity,” he said.

The study data don't offer any explanations, Labarthe said. “Stress could be playing a role and looking at that should be part of further investigations,” he added. “Diet could be a more direct contributor. All parts of the picture need to be clarified.”

There have been hints before now that soldiers might have worse heart health, said Dr. Omar Ali, director of the cardiac catheterization lab at Detroit Medical Center's Heart Hospital. An earlier study, Ali said, found that Army personnel had a 62% higher rate of coronary artery disease than civilians.

Because you can't get in the Army with high blood pressure, “that means their lifestyle or just the nature of being in the Army puts them at risk for higher blood pressure,” said Ali, who wasn't involved in the study. “This is a wakeup call for further investigations for two reasons: first we want to make sure health issues are not affecting the readiness of our troops and second we want to find out if they are going to be sicker when they come out of the Army.”

SEE ALSO: The Army Is Developing An Alternate Combat Fitness Test For Soldiers With Permanent Injuries