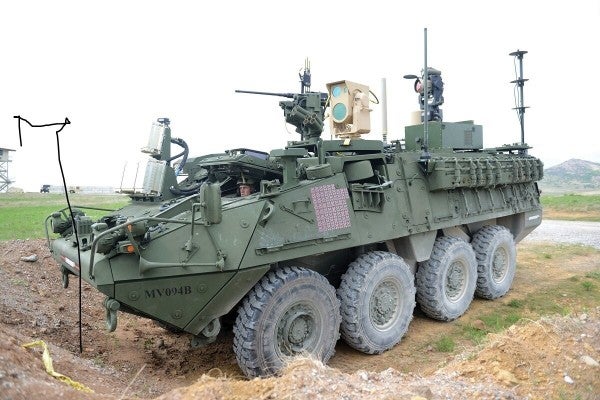 The Army says it will be able to field combat vehicle-mounted lasers and hypersonic missiles within the next four years to prepare for combat against rivals like Russia or China that may employ enemy drones or their own hypersonic weapons.

The Army intends to field test its 50-kilowatt vehicle-mounted laser, which is designed to shoot down enemy drones, rockets, and artillery and mortar rounds, in 2021, and then a battery of four vehicles will be delivered to troops the following year.

There is also a project to develop a 100-kilowatt laser that could be mounted on a heavy truck. The challenge so far has been generating the necessary power levels.

As for the hypersonic weapon, Thurgood's office is overseeing the development of a common boost-glide vehicle that travels faster than five times the speed of sound, and which will be incorporated into submarine- and air-launched hypersonic weapons for the Navy and Air Force. The Army announced recently that the first joint flight test of a future hypersonic weapon will be conducted next year.

That test will be followed by flight tests every six months.

The ground-based LRHW will be delivered to soldiers in sets of four launchers carrying two rounds each. The transporter erector launchers (TELs) will be installed on trailers and pulled by Heavy Expanded Mobility Tactical Trucks.

Soldiers will first be introduced to the launch system in 2021, at which point troops will begin training for the first TEL launch in 2022.

The LRHW is one of four priorities for the Long-Range Precision Fires (LRPF) team at Army Futures Command.

As Russia and China are also racing to field hypersonic weapons, the Army is planning to spend around $1.2 billion on experiments to counter these capabilities. Hypersonic weapons are particularly threatening not only because of their high speeds, in excess of five times the speed of sound, but also because they are able to maneuver along unpredictable flight paths, making them nearly impossible to intercept.

Thurgood's office has been tasked with delivering hypersonic and directed energy weapons.

“We've been in a full-out sprint since then,” Thurgood said recently.

SEE ALSO: One Lucky Destroyer Crew Will Officially Be The First To Rock The Navy's Newest Laser Weapon

WATCH NEXT: The Army Fires A Laser From An Apache