Pfc. Justin Candido Kirby, 21, was conducting combat maneuver operations in a Humvee when a "vehicle accident" occurred, the Army said. 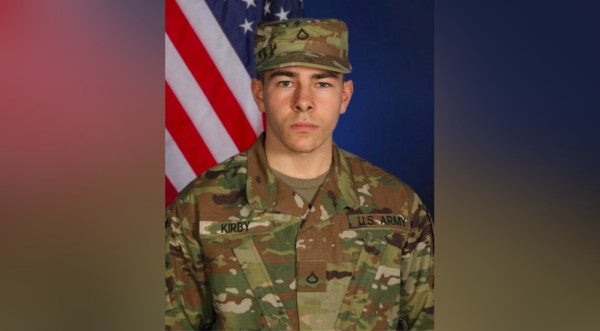 FORT IRWIN, Calif. — A soldier from New Bedford was killed and another service member sustained injuries during a training exercise Monday, authorities said.

U.S. Army Pfc. Justin Candido Kirby, 21, was killed while taking part in what officials described as a “large-scale” exercise within the center's training grounds Monday morning, according to a Fort Irwin National Training Center statement.

Col. Scott Woodward, 68th colonel of the 11th Armored Cavalry Regiment, said Kirby was well known across the regiment, adding that “his passing has deeply affected us all.”

“Our thoughts and prayers are with his family and his fellow soldiers,” Woodward said.

Kirby, a native of New Bedford, and an unidentified second Army soldier were conducting combat maneuver operations in a M1113 High Mobility Multipurpose Wheeled Vehicle, known colloquially as a Humvee, when a “vehicle accident” occurred, the statement said.

New Bedford first responders showed their support for the Kirby family following news of his death. Kirby's father Robert Kirby is a city firefighter and his twin brother, Jason Kirby, works as an EMT for New Bedford EMS and is currently enrolled in paramedic school, according to the New Bedford Fire Department.

The department posted a statement to their Facebook page on Wednesday, “The entire New Bedford Fire Department family extends its sympathies to the Kirby family during this difficult time…We extend our appreciation to the Kirby family for their service and community and our country.”

The New Bedford Police Union shared the news on their Facebook page as well, writing “Rest In Peace Pfc Justin Kirby, Prayers for the family.”

Union President Hank Turgeon, had a personal connection to Kirby — Kirby was friends with his son who is in the Army National Guard and just returned from the same training base where Kirby was killed.

“My son is devastated at the loss of his friend and brother soldier and we know the impact will be felt through the city,” Turgeon said.

Kirby attended Global Learning Charter Public School in the near North End from 5th to 12th grade, graduating in 2016, according to Principal Lena Pires.

Pires called the Global Learning community a tight knit family and said they were floored when they heard the news, “genuine shock, genuine hurt, genuine sadness.”

She said during his time there she saw “the amazing growth that that young man experienced and I don't think it was just our school, it was his own amazing growth.”

Even while he was attending Global Learning, Pires said Kirby knew that he wanted to go into the military and then become a firefighter and he quietly persevered through life to reach his goals.

She saw him recently when he was on a break from training and said, “My last memory is of him happy, healthy, talking with a sparkle in his eye about what he's doing in the military.”

Pires said she could tell that he was living his passion.

A student alumni group has been sharing stories and videos of Kirby, according to Pires.

“You just see the genuine, funny, caring guy that he was,” she said.

Eric Santos was one year behind Kirby at Global Learning and described him as a friendly, funny guy with a genuine heart who stayed in touch with many of his former classmates.

“It was always his dream to serve his country, and he used to check up on me every so often, telling me how happy he was in the army.” Santos said. According to Santos, Kirby planned to serve in the military for eight years before becoming a firefighter.

“Justin Kirby is a role model to many, including myself, and a truly exceptional human being.” Santos said, “He had a very bright future ahead of him, and at the very least he died doing what he loved. I remember him as a great friend, a great warrior, and a hero.”

College spokesperson Kevin Spirlet said, “Bristol Community College sends our deepest sympathy to the Kirby family. We are proud of the service that he gave our country and offer our heartfelt condolences on behalf of the entire college community.”

New Bedford mayor Jon Mitchell ordered the flags at all city buildings to be flown at half-staff in Kirby's honor.

“I extend my heartfelt sympathy to the family of U.S. Army Pfc. Justin Kirby… It is my hope that the gratitude and reverence of our city for Justin's dedication and patriotism may bring some measure of comfort to Justin's family as they mourn his sudden loss,” Mitchell said in a statement.

The injured soldier was taken by military helicopter to University Medical Center of Southern Nevada. The soldier was released after being medically cleared by hospital staff there.

Jason Miller, with Fort Irwin's public affairs office, told the Daily Press that Monday's exercise involved approximately 7,500 soldiers who were in the center's training area at the time of the fatal accident.

The soldiers were conducting what Miller described as “realistic training reflective of the complexities our nation could face in combat.”

Both Kirby and the unidentified soldier are assigned to the 11th Armored Cavalry Regiment that is garrisoned at Fort Irwin, located about 37 miles northeast of Barstow.

A single Humvee was damaged during the incident, which is under investigation, Miller said.

This story was also reported from California by Matthew Cabe of the Victorville, California Daily Press.