How the Army’s futuristic new goggles are changing the mechanics of shooting, according to soldiers 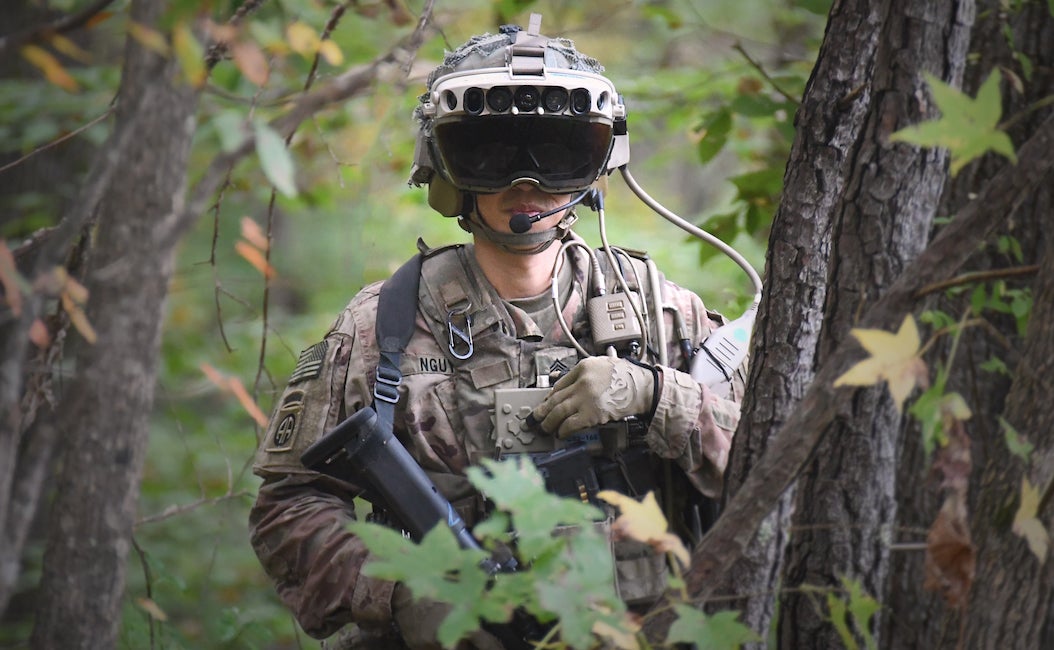 The newest Microsoft-designed IVAS prototype resembles a sci-fi version of the tactical dust goggles soldiers wore in the last two desert wars. Slated for fielding in fiscal 2021, IVAS is designed to equip soldiers with a heads-up display (HUD) that allows them to view tactical maps, as well as their weapon-sight reticle.

A special thermal weapons sight mounts on the M4A1 carbine and projects the sight reticle into the wearer’s field of view via Bluetooth signal — a technology known as Rapid Target Acquisition.

“The real difference we were experiencing, because of the way the HUD is designed, you actually don’t really shoulder your rifle quite the way that you normally would without the IVAS system,” Sgt. Sam Crawford, a team leader in Comanche Company, 2nd Battalion, 501st Parachute Infantry Regiment, told Military.com.

“It would take some getting used to,” Crawford said. “As somebody who fires weapons, it’s very alien to us.”

Crawford’s unit participated in the Army’s third soldier touchpoint evaluation of the first ruggedized version of IVAS at Fort Pickett, Virginia, in October.

“I was trying out a bunch of different things just to see what was effective for myself,” he said. “Shouldering wasn’t quite the way it normally was, so I tucked the [buttstock] under my right arm and was able to use it like that. It felt stable; it was just different. It looked like something out of a Rambo movie.”

Staff Sgt. Kaleb Kester, a weapons squad leader in Comanche Company, said he quickly gave up on how he was trained to shoot.

“It’s a lot different from how we are used to shooting,” he said. “At its current state, you can’t get a proper cheek-to-stock weld.”

1st Lt. Nicholas Christopher, a platoon leader in Comanche Company, agreed it takes some getting used to, but said he realized shooting with the IVAS is similar to shooting with night observation devices, or NODs, by aiming an infrared (IR) at a target.

“You have to shoot it more like you are shooting with an IR laser, like the way we do right now with NODs and an [AN] PEQ 15,” Christopher said. “But they took us to a standard M4 range, and I was hitting targets out to 300 yards, and a lot of my guys were doing that too.”

However, all three paratroopers said they were impressed how easy IVAS is to learn to use and are excited by the navigation and situational awareness tools it offers.

Soldiers spent the first few days learning how to access menus, use the functions and fit the IVAS to their kit.

“I personally went through every menu I could and was looking at what each of the functions did — very easy to use,” Kester said, adding that the small, chest-mounted control pad is also very intuitive to use. “The control pad that you use, you could put your hand on it and track what buttons you were using just by the tactile reference points they put on the control interface.”

Crawford said his first impression was that the device is a little bulky, “but as we began to use it more, you could definitely see the potential that it could be an awesome tool in the future.”

The current prototype straps to the helmet, sitting on the brim so it doesn’t have to touch the wearer’s face, the soldiers said.

“Inside the system, we had a map of the area we were in, and we were able to plot points on the map. And then you could take the map away, and you would have arrows and a compass where you could walk to those points. And it would be something almost out of a video game just projected out in front of you on the landscape — ‘Go this way,'” Crawford said. “It made it incredibly easy to not get lost, and everybody was on the same page of where we were going.”

Christopher was also surprised at how well this feature worked.

“If you look up, you can actually see a compass that moves with your head and gives you, like, a pinpoint compass reading in degrees. And if you look down, you have a marker placed on the map; it actually has a little arrow with the distance and direction of exactly where you need to go,” he said. “It was very fluid; there wasn’t really any hiccups. It wasn’t slow.”

Crawford found the navigation feature useful when his unit did an assault and seizure of a trench system.

“I was actually the lead element going into the trench, and I was able to coordinate with our weapons squad leader where exactly the entrance point was for myself and my team,” he said. “He put a point down on the map for the exact entrance to the trench, and I was able to just navigate though that, through smoke and just run straight to the entrance of the trench and get my guys there super fast, compared to had I not had that, it would have been running through smoke and not really knowing where you are popping out at — too far left, too far right — so it was very useful for that.”

Crawford said he told the Microsoft officials on site that the night vision and thermal sensors on this version of IVAS could be clearer. They told him they already have a new prototype with upgraded sensors.

“I was able to look through an upgraded version of it, so it was pretty cool that they were making changes on that already,” he said.

Christopher said IVAS will be extremely useful to leaders because they can easily view the location of each member of the unit.

“The ability to bring up a map and see where all my guys are and send waypoints to them of various types like “move here” or “enemy here” … all in real time and have that level of precise communication with them in terms of maneuver was a huge boon to me,” he said.

The Army has been working for decades to field this type of capability. The first attempt started in the mid-1990s with the Land Warrior program, which featured a bulky computer, heavy cables and a helmet-mounted eyepiece through which soldiers could view tiny maps for unit situational awareness. More than a decade later, the Army chopped the system down to the Nett Warrior system, which features a ruggedized smartphone that key leaders can use to view maps, send text messages and check the locations of other units.

The system is now known as the end-user-device (EUD) and is worn mounted to the front of a leader’s body armor, but Christopher said it can pick up the locations only of those wearing it, such as squad leaders and team leaders.

“With the IVAS, I can see where every single one of my soldiers are,” he said.

Kester agreed. “I have used the EUD, and I think this is a tremendous upgrade over the EUD,” he said.

Part of this evaluation was designed to test the ruggedness of the current IVAS prototype, so there was lots of infantry weather.

“It rained pretty hard on us,” Christopher said. “They told us a big part of this testing phase was to see how well it did in the rain. And we were expecting some malfunctions, but any malfunctions we did have were not water-related.”

Most glitches occurred when a wire got disconnected, Christopher said. “You just have to stop and do some self-repairs on it just to make sure everyone’s system was up.”

Some soldiers did not have a lot of patience with the IVAS prototype, Kester said.

The soldiers agreed, though, that this version of the IVAS could be improved.

Kester said one of the medics complained that he had trouble seeing what he was doing when he tried to treat casualties while wearing the IVAS.

“In order to treat a casualty, some of the sensors where they are located make it more difficult,” Kester said. “I kind of went down this rabbit hole with them … of how do we place the sensor so you can see a little bit better below you.”

Christopher said he wants the device to be lighter.

“One thing that a lot of us talked about to the Microsoft employees is the system itself, I would say, is still a little heavy … and to prevent neck strain, they should try to get it to a smaller package,” he said.

Crawford also suggested that the bottom of the IVAS could be less bulky.

“If there was a way to reduce the size of the IVAS system a little bit at the bottom of it, so that you could shoulder your weapon more steadily while maintaining your sight picture, I think there [are] going to be times and places where you need that,” he said.

Army officials did not immediately respond to questions about how much the system weighs or its dimensions.

Kester said he suggested to program officials that IVAS could work better if it didn’t rely solely on a thermal sight, which can make it difficult at times to clearly identify a target.

“One of the issues that I had was, sometimes under thermals, you can’t tell the difference between friend and foe,” he said.

“We have learned so much through Soldier Centered Design,” Potts said. “Our real desire is to let soldiers design it, and then our engineers build what they design. It’s about listening to our soldiers.”

Kester said he prefers to shoot in a more traditional fashion with his cheek resting against the stock of the weapon, but added that he believes in the overall IVAS concept and what it offers to the infantry.

“I have been trained in the Army for 11 years, I have taught pistol and rifle marksmanship. … I prefer to have a cheek-to-stock weld; I feel like I can get a better shot,” he said. “However, I am willing to put in more work and effort to make this work. … They said they want to field it in a year, and I am very interested to see how far they come in that time.”