Brittany DeBarros is waging the kind of vehement public protest via Twitter against the Defense Department and U.S. government that's... 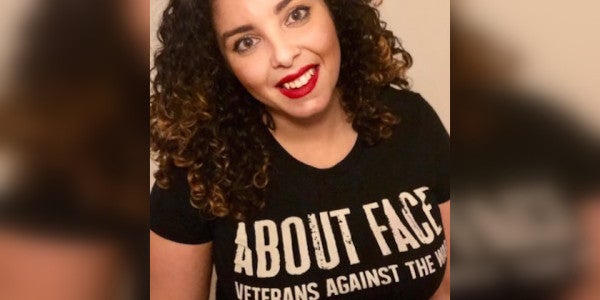 Brittany DeBarros is waging the kind of vehement public protest via Twitter against the Defense Department and U.S. government that's commonplace in the Trump-era — except that DeBarros is a captain in the U.S. Army Reserve assigned to the Army's Psychological Operations Command.

According to DeBarros' Twitter account, she has been called up on two-week assignment since July 14, but each day since then DeBarros has posted tweets criticizing “the horror being carried out by our war machine for profit,” with the Army moving to investigate the officer's remarks.

I’m on Army Orders for the next 14 Days and there’s not much I can do about that. WHAT I CAN DO is schedule daily posts in my absence with facts about the horror being carried out by our war machine for profit. Please RT. DAY 1. #DropTheMIC #GIResistance pic.twitter.com/O0tayNzmYM

The “Dept. of 'Defense' is the largest oil consumer worldwide,” DeBarros notes in one tweet. “The violence unleashed directly is horrific, but it also has massive spillover impacts.”

DAY 5. When I was deploying to Afghanistan in 2012, I was shocked by how many ppl responded- Wait didn’t we leave Afghanistan?
Today, awareness still abysmal, violence still climbing.

“Defense corporations made contributions to 496 of 525 Congress members in 2018,” DeBarros said in her most recent tweet, posted on July 20, the seventh day of her assignment. Defense contractors are prolific political donors, though many of their contributions come from their political-action committees, owners, employees, or employees' immediate families.

DeBarros, however, has stopped short of directly criticizing President Trump during her July protest; using “contemptuous words” against the president is a violation of military law.

DeBarros detailed her criticism of U.S. foreign policy and its impact at home in a June 23 speech in Washington, DC, at a Poor People's Campaign rally.

During the speech, DeBarros said she was a combat veteran who identified as a woman, Latina, white, black, and queer, and that as a person “existing at the intersection of these identities, I carry a grave conviction in my core that there can be no true economic, racial, gender liberation without addressing the militarism that is strangling the morality and empathy out of our society.”

“For decades, we have been lulled into complacency and inattention as our drones have obliterated weddings, funerals, religious ceremonies, ordinary homes, and ordinary people,” DeBarros said.

“We begrudge the poor for the pennies we give them to eat and survive but cheer for the nearly $600 billion annually we spend on defense. The military industrial complex is literally corporate greed weaponized,” DeBarros added. “From the militarized equipment in which our police forces and federal agencies are clad, to the large percent of current and former soldiers conditioned for war and then hired to occupy our streets to keep peace, is it any wonder that our neighborhoods are treated like combat zones, and our neighbors treated like combatants?”

DeBarros' protest has gained the attention of the Army, which confirmed her assignment to Army Times and said it was looking into her statements.

Officials at U.S. Army Civil Affairs and Psychological Operations Command “are aware of the situation surrounding Cpt. Brittany DeBarros,” Army spokesman Sgt. 1st Class Stephen Crofoot told Army Times on Friday. “To maintain the integrity of the ongoing investigation, we are unable to comment at this time.”

Army Reserve and National Guard soldiers are permitted to make political statements in public while they have civilian status but doing so is not allowed while they are on active orders. DeBarros did not reply to Facebook messages sent by Army Times, nor did she respond to a Twitter message sent by Business Insider on Monday.

Rapone — an Afghanistan combat veteran and a 2016 West Point graduate — posted pictures of himself at his West Point graduation in a T-shirt with Che Guevara's face and with a sign reading, “Communism will win,” inside his hat.

Rapone, who says he retains an honorable discharge from his enlisted service, posted the photos in September 2017, telling the Associated Press he did so in solidarity with Colin Kaepernick.

The photos provoked a backlash, including a call for an investigation by Florida Republican Sen. Marco Rubio, which prompted West Point to say Rapone's actions “in no way reflect the values” of West Point or the Army.

Rapone enlisted in the Army after high school and served as a Ranger in Afghanistan but became disillusioned with the military soon after joining, he said in June on an episode of What a Hell of a Way to Die, a left-wing podcast hosted by two combat veterans.

“By the time I deployed, I encountered most people who had no real interest in why we were fighting and more so interested in just the next time they could go out and kill brown people and just the Afghan population,” Rapone said.

“To this day, we had this nebulous idea of going after the Haqqani network, and I'm sure they're not great dudes, but it's like, are they really threatening the United States of America?” Rapone said. “And isn't it the United States that caused Afghanistan to turn into hellscape?”