Soldiers and equipment from the Army's 1st Armored Brigade Combat Team, from the 1st Cavalry Division based at Fort Hood... 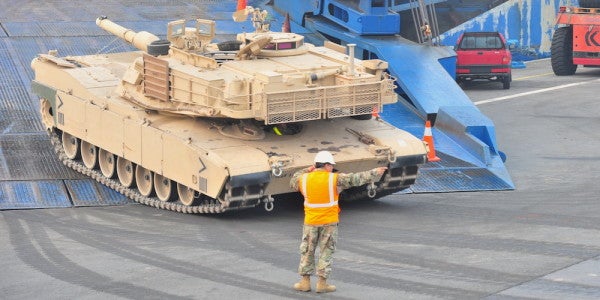 Operation Atlantic Resolve started in April 2014, in response to Russian interference in Ukraine, and is meant to emphasize US commitment to European defense through “continuous, enhanced multinational training and security cooperation.”

“Sometimes what is old is new again, and that is coming in here,” Shapiro said. “Antwerp and Rotterdam were major ports when we were operating during the Cold War … We are coming back to Antwerp in a big way.”

“It's a totally different type of deployment,” said brigade commander Col. Wilson Rutherford IV. “We could have gone into the port of Gdansk, , which is much closer, but we wanted to exercise this port, exercise the barge movement, the line haul, and the convoys.”

These problems led NATO to conclude in an internal report late last year that its ability to rapidly deploy around Europe had “atrophied since the end of the Cold War.”

“By facilitating military mobility within the EU, we can be more effective in preventing crises, more efficient in deploying our missions, and quicker in reacting when challenges arise,” EU foreign-policy chief Federica Mogherini said at the time.