Retired Army Lt. Gen. Jack Brodie Farris Jr., who led ground forces in the U.S. invasion of Grenada in 1983, died in his native Charlotte, North Carolina on Dec. 14 after a long illness. He was 84 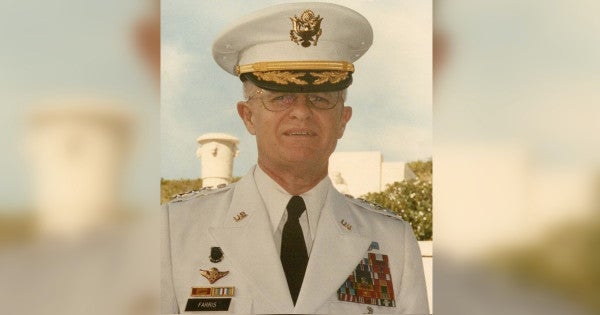 Retired Army Lt. Gen. Jack Brodie Farris Jr., who led ground forces in the U.S. invasion of Grenada in 1983, died in his native Charlotte, North Carolina, on Dec. 14 after a long illness. He was 84.

The graduate of Myers Park High School and The Citadel in Charleston, South Carolina, entered the Army as an infantry officer. His 33-year military career took him to Vietnam, where he served as a battalion commander, South Korea and the Pentagon.

Grenada, the Caribbean island that U.S. troops invaded after political unrest in a Marxist government, was a brief stop in Farris' much-traveled military life.

Senior leaders of Fort Bragg's 82nd Airborne Division had assumed their soldiers would be heading to the Middle East, the Times reported. With no maps of Grenada to be found on the sprawling N.C. base, officials resorted to tourist maps they bought in downtown Fayetteville.

The invasion was triggered by the execution of Grenada's prime minister. The island nation had ties to Cuba and was feared to be a target of expansion by the Soviet Union. U.S. officials feared the 650 Americans studying at a medical school there could be taken hostage.

Operation Urgent Fury sent nearly 8,000 U.S. troops to the island and ended in a little more than a week, with 19 Americans killed and 116 wounded. U.S. forces were off the island by mid-December.

“The insurgent movement has been put to bed,” Farris, then 47, declared in a Dec. 1, 1983, interview with The Charlotte News from Grenada. Farris added that he still found time to run on the beach and dip into the ocean for a quick swim each morning.

A fellow Citadel graduate, Osborne “Obie” Oakley of Charlotte, described Farris at the time as a “sinewy, very willowy” long distance runner and a strict but fair-minded disciplinarian. He and his wife Diane, who survives him, had one child, Marianne, who now lives in Columbus, Ga.

Marianne was “seven years old and has lived in seven different places,” Farris told The News from Grenada. “We kind of live like gypsies.”

Among his early Army assignments was as a company commander in the 82nd Airborne Division at Fort Bragg and as a battalion commander in Vietnam, his obituary says. He twice was exposed to Agent Orange, a defoliant used in Vietnam that has since raised concerns about health effects, it says.

Farris later served in Turkey, at the U.S. Army Command and General Staff College at Fort Leavenworth, Kansas, and in the office of the Army Chief of Staff in Washington, D.C. He was chief of staff for the 4th Infantry Division at Fort Carson, Colo., and deputy director of the Joint Deployment Agency at MacDill Air Force Base in Florida.

At the time of his Grenada duty, Farris was deputy commander of the XVIII Airborne Corps at Fort Bragg.

He later served in South Korea and as commanding general of the 2nd Infantry Division, overseeing 30,000 troops, his obituary says. After serving as chief of staff for the U.S. Army Training and Doctrine Command in Virginia, he was promoted to three-star rank and finished his career as deputy commander of the U.S. Pacific Command in Hawaii, retiring in 1991.

While in the Army, Farris earned a master's degree in international affairs from Florida State University and graduated from the U.S. Army War College, Army Ranger School and the Marine Corps Amphibious Warfare School. He earned combat infantryman and master parachutist badges.

Among his awards were the Defense Superior Service medal, the Legion of Merit with three oak leaf clusters, the Distinguished Flying Cross, the Bronze Star with oak leaf cluster and the Purple Heart.

“He loved his men and they worshiped him. He had that extraordinary leadership characteristic that made you want to please him,” his obituary quotes an unnamed soldier who served under Farris as saying. “When he asked you to do something you would do everything in your power to make it happen, and when the mission was accomplished nothing felt better than to have him look at you, smile and say 'Drive On!' “

A private memorial service will be held at a later time, his family said. They asked that memorials be made to The Citadel Foundation, 171 Moultrie St., Charleston, S.C. 29409.