The Army has awarded Medals of Heroism, the service’s highest medal for Reserve Officers' Training Corps cadets, to the three... 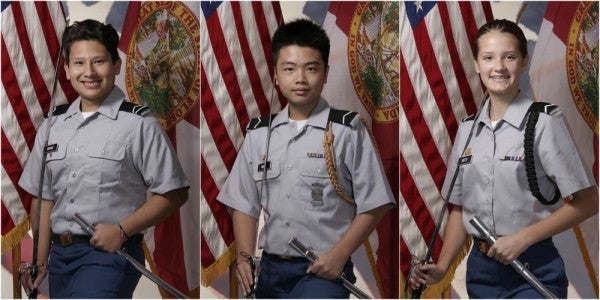 The Army has awarded Medals of Heroism, the service’s highest medal for Reserve Officers' Training Corps cadets, to the three JROTC students killed defending their classmates from a gunman at Marjory Stoneman Douglas High School in Florida on Feb. 14

All three students were among the 17 people killed by former Stoneman Douglas High School JROTC cadet Nikolas Cruz on Wednesday. According to eyewitness accounts, Wang was last seen holding a door open to allow his fellow students to escape. The Army confirmed the news, first reported by The Daily Beast, to Task & Purpose on Tuesday.

Related: How You Can Honor Hero JROTC Cadet Peter Wang, No Matter Where You Are »

“It's my understanding that this is an open casket service and the family requested their son be buried in his JROTC uniform,” U.S. Army Cadet Command spokesman Michael Maddox told Task & Purpose. “The JROTC Heroism medal will be on his uniform, but a second ‘keepsake’ medal will be given to the family.”

The South Florida Sun-Sentinel reports that the U.S. Military Academy planned on providing the Wang family with a letter posthumously accepting Peter to West Point Class of 2025:

Broward County Public High School system’s JROTC program claims an average enrollment of 7,650 students in 28 of its 34 schools annually. According to the Wang family, proceeds from a Peter Wang Memorial Fund GoFundMe campaign established to support the JROTC program at Stoneman Douglas, whose members exhibited exemplary acts of heroism during the shooting.

“Awards for other possible Cadets are going through a review process, to include the two Cadets who were on the news,” Maddox told Task & Purpose. “However, the immediate focus right now is on supporting the funerals with dignity and honor, so deserved by these cadets and their families.”