The U.S. Army has opened an investigation into allegations that some active-duty soldiers may be involved in the online sharing of... 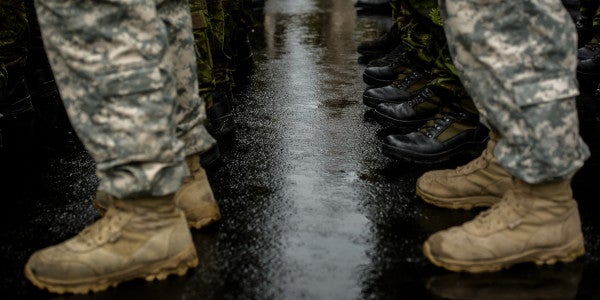 The U.S. Army has opened an investigation into allegations that some active-duty soldiers may be involved in the online sharing of nude photos of their colleagues, Business Insider has learned.

The inquiry by the Army's computer crime investigative unit comes one day after Business Insider reported that the scandal initially believed to be limited to the Marine Corps actually impacts every branch of service.

The report revealed a public message board where purported male service members from all military branches, including service academies, were allegedly cyber-stalking and sharing nude photos of their female colleagues.

Special agents from Army's criminal investigation command “are currently assessing information and photographs on a civilian website that appear to include US Army personnel,” Col. Patrick Seiber, a spokesman for the Army, told Business Insider. “They are currently assisting to determine if a criminal offense has occurred.”

Seiber said there was no evidence at this point suggesting the site was related to the “Marines United” Facebook page. That page, which was reported on by journalist Thomas Brennan, had some 30,000 members that were found to be sharing nude photos of female Marines.

“Army CID is speaking with and US Air Force Office of Special Investigation to ensure all investigative efforts are fully coordinated,” Seiber said.

According to the Business Insider report, members on a website called AnonIB often posted photos — seemingly stolen from female service members' Instagram accounts — before asking others if they had nude pictures of the victim.

The site features a dedicated board for military personnel with dozens of threaded conversations among men, many of whom asked for “wins” — naked photographs — of specific female service members, often identifying the women by name or where they are stationed.

In a thread dedicated to the U.S. Military Academy at West Point, some users who appeared to be Army cadets shared photos and graduation years of their female classmates.

“What about the basketball locker room pics, I know someone has those,” one user said, apparently referring to photos taken surreptitiously in a women's locker room. “I always wondered whether those made it out of the academy computer system,” another user responded.

In 2012, an Army sergeant who helped train and mentor cadets was discovered to have secretly filmed more than a dozen women in the bathroom and shower areas at West Point. The soldier pleaded guilty in the case and was sentenced in 2014 to 33 months in prison.

A Pentagon spokesman condemned such behavior as “inconsistent with our values” on Thursday, and Defense Secretary issued a statement Friday calling it “unacceptable and counter to unit cohesion.”

The existence of a site dedicated solely to sharing nude photographs of female service members is another black mark for the Pentagon, which has been criticized in the past for failing to deal with rampant sexual harassment and abuse within the ranks.