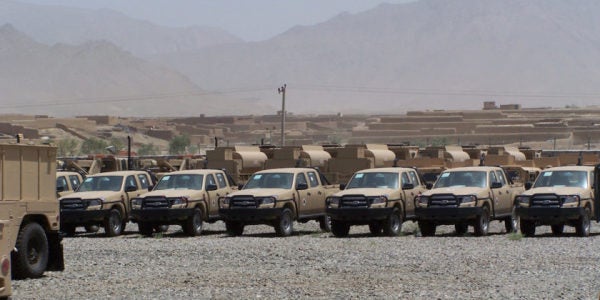 U.S. Army's senior leadership has ended an agreement with Orbital ATK Inc. that spanned two decades over the XM25 25mm airburst weapon, a move that could put the troubled weapon system's future into jeopardy.

Nicknamed “the Punisher” and designed by Orbital ATK and Heckler & Koch, XM25 has long been the Army's attempt to field a “leap-ahead” weapon designed to give infantry units a decisive edge against enemies hiding behind cover.

The XM25 has stirred excitement in the infantry community, but the complex system has also been plagued by program delays that have made it a target of Pentagon auditors.

The latest trouble for the program came when the Army canceled its contract with Orbital ATK just one month ago.

“On April 5, 2017, the Army terminated the XM25 Counter Defilade Target Engagement (CDTE) contract with the prime contractor (Orbital-ATK) after it failed to deliver the 20 weapons as specified by the terms of the contract,” an Army spokesman told Military.com in a May 5 email.

“Despite extensive negotiation efforts, the contractor failed to provide an acceptable alternate resolution to the Government.”

The announcement follows reports that Orbital ATK filed a lawsuit in February against Heckler & Koch in the Minnesota U.S. District Court seeking damages in excess of $27 million, according to a report by Reuters.

In the complaint, Orbital said it was seeking damages for breach of contract over the XM25 semi-automatic weapon system, which Orbital and Heckler & Koch started developing more than 20 years ago.

Orbital said in the filing that Heckler & Koch had failed to deliver 20 additional prototypes of the XM25 weapon systems, as contracted, and that its failure to do so meant the Army had raised the possibility of terminating its contract with Orbital, Reuters reported.

Heckler & Koch has rejected all claims in the suit, according to the news agency.

Military.com reached out to both Orbital ATK and Heckler & Koch for comment but did not receive a response by press time.

It's unclear what the future is for XM25, but Army weapons officials appeared unsure of its status this week at the National Defense Industrial Association's 2017 Armaments Systems Forum.

Following a presentation from the Army's Project Manager Soldier Weapons, an audience member asked why the XM25 did not appear on any of the briefing slides covering the Army's near-term, mid-term and far-term small arms programs.

Lt. Col. Steven Power, who runs Product Manager Individual Weapons, said, “The XM25 is still managed by my office” and then gave a long pause before adding, “I can't speak right now about the status of that program.”

Power said, “I have been informed that it is not really my place to provide information ahead of other stakeholders.”

Col. Brian Stehle, head of Program Manager Soldier Weapons, said, “There is a requirement within the Army to have an air-burst, direct-fire capability within our formation. The Army is reassessing the actual requirement itself, and we are pursuing material solutions.”

The service has considered taking the XM25's fire-control system and joining it to a weapon that shoots a 40mm air-burst grenade, a technology Army ammunition experts are developing, according to service sources who are not cleared to speak to the press.

The XM25 is an offshoot of the Objective Individual Combat Weapon program the Army began in the mid-1990s to increase the effectiveness of soldier firepower.

It features a target acquisition/fire control system that allows soldiers to identify a target, determine the range, and program the ammunition to explode above or near targets out to 600 meters.

But the stand-alone weapon has suffered from a barrage of criticism from both auditors as well as from military units.

In September 2016, the Defense Department's Inspector General's Office released a follow-on report to a March 2014 audit and concluded Army officials “could have managed the schedule, affordability, and quantity requirements of the XM25 program more effectively.”

But while the IG said the service's decision to extend the development effort and XM25 research caused costs to climb between February 2013 and March 2016, it failed to specify actual dollar amounts.

Indeed, the report was heavily redacted, with blacked-out figures for not only cost increases but also quantities, including how many XM25s the Army intends to field as part of its basis of issue plan.

Problems with the program started Feb. 2, 2013, when the XM25 malfunctioned during its second round of operational testing in Afghanistan, inflicting minor injuries on a soldier.

The Army halted the operational testing when the XM25 experienced a double feed and an unintentional primer ignition of one of the 25mm high-explosive rounds, Army officials said at the time.

The warhead did not detonate because of safety mechanisms on the weapon. The service removed all prototypes from theater to determine the problem's cause.

According to PM Individual Weapon officials, the XM25 has not had any similar malfunctions since changes were incorporated into the weapon and ammunition, the audit states.

In March 2013, elements of the 75th Ranger Regiment refused to take the XM25 with them for a raid on a fortified enemy compound in Afghanistan, sources familiar with the incident said.

After an initial assessment, Ranger units found the 14-pound XM25 too heavy and cumbersome for the battlefield. They were also concerned that the limited basic load of 25mm rounds was not enough to justify taking an M4A1 carbine out of the mission, sources said.