‘It was totally like a foreign country’: South Koreans angered by US troops firing fireworks and brawling on the street 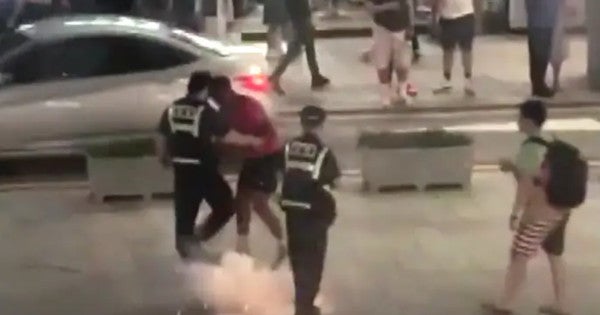 Americans living in South Korea celebrated the United States' independence by lighting fireworks on public sidewalks and beaches, prompting local authorities to shut down the groups.

In the Haeundae district of the city of Busan, over 70 police reports were filed over the lighting of fireworks, according to the South Korean newspaper Chosun Ilbo. Residents also reported dozens of fireworks being aimed at buildings and at people.

Over 200 law enforcement officers were reportedly deployed to the beach in response to the police reports. Lighting fireworks on the public beach is banned and carries a fine of up to an US equivalent of $42, according to South Korean news reports.

At least one US Army soldier was briefly detained. United States Forces Korea (USFK), the military command that oversees US forces in the country, did not respond to multiple requests for comment.

Videos and pictures showing foreigners lighting fireworks in a crowded street spread on social media. One video showed a celebrator fleeing from pursuing law enforcement officers, while another showed foreigners fighting each other.

Some residents also complained that the visiting US troops were not wearing face masks. Although South Korea saw 48 new coronavirus cases reported on Monday, the country has been widely praised for its response to the pandemic — which includes a vast contact tracing effort.

“It was totally like a foreign country, not Korea,” one Busan resident told South Korea's YTN News. “If you look at the restaurants, they were packed with US service members eating. And none of them were wearing face masks.”

In April, USFK advised US troops to wear face masks off-base “as a courtesy and sign of solidarity with our host nation communities,” and as “a visible sign of our commitment to combatting COVID-19 and testament to US-[Republic of Korea] Alliance.”

Following a July incident in which a US Army soldier was accused of attempting to steal a taxi and assaulting a police officer, Abrams reiterated that “we are guests here.”

“We are also Ambassadors who represent our country on and off duty. Below is an example of not being a good Ambassador,” Abrams said in a tweet in response to the incident.

In December, USFK officially ended a country-wide 1-5 a.m. curfew for its roughly 28,500 troops.

“Leaders are responsible for our Service Members on and off-post conduct; we are ambassadors of USFK, the United States and the … Korean people,” US Army Gen. Robert Abrams of USFK said in a statement at the time.