The head of the Army's new four-star command for the development of next-generation weapons identified Russian and Chinese advances in... 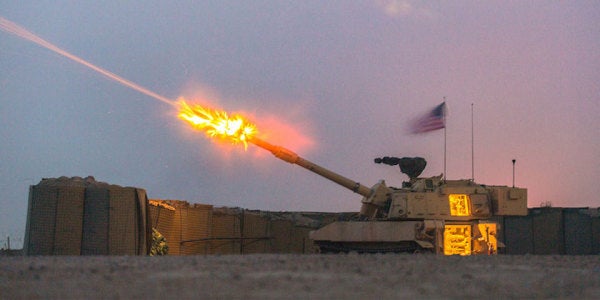 The head of the Army's new four-star command for the development of next-generation weapons identified Russian and Chinese advances in weapons as motivations for some of the future weapons projects in the works, including a long-range cannon that strike targets nearly 40 miles away.

“That is a big piece of it,” Gen. John M. Murray, the first head of Army Futures Command, said Monday at the Association of the United States Army conference in Washington, DC. “We did a study called 'The Next-Generation Russian Warfare Study' … That was kind of the wake-up call in terms of the capabilities that the Russians had been developing.”

“The Russians, and in many ways the Chinese as well, are able to outrange most of our systems,” he explained.” They are establishing stand-off capabilities. We saw that in the Ukraine. We saw the pairing of drones with artillery, using drones as spotters.”

A 2015 RAND report, according to Defense News, argued that Army rocket systems were “falling behind the increasing range of similar Russian and Chinese rocket systems.”

An interest in stand-off weaponry has also been seen in Russian and Chinese research into air-to-air missiles intended to eliminate vulnerable aircraft supporting the F-35 Joint Strike Fighter and enhance each countries anti-access, area-denial capabilities.

“The Russians have made some significant advances. That was a wake-up call for us to start looking at this in a more serious manner,” he added, noting that the Army's focus is now in line with the National Defense Strategy, which stresses the return of great power competition.

“The gaps that programs are meant to address … shift back to a focus on great power competition, against near-peer states. Those were the capabilities that we didn't walk away from but kind of mortgaged over the last 17 years to do the counterinsurgency fight,” the general introduced.

Murray pointed to the Extended Range Cannon Artillery (ERCA) program, part of the priority long-range precision fire project, as one program that was changed based on lessons learned from Russia and China.

He explained that while the U.S. maintains a competitive edge in the quality of American artillery, Russia has a notable advantage in terms of quantity and range. But, that's changing as the Army adapts to new security challenges from peer and near-peer competitors.

“We just doubled the range of our cannon artillery last week, demonstrating that at the Yuma proving grounds,” Murray told reporters, revealing that the cannon fired a shell roughly 62 kilometers.

Related: The Army Is Eyeing A Strategic Cannon With The Range Of A Tomahawk Cruise Missile »

“We know we need the range in order to maintain overmatch,” Col. John Rafferty, head of the long-range precision fire cross-functional team, recently told Defense News. “We need 70 to 80 kilometers because that's the start, and then we will be able to get farther. Right now we are on a path to 70 kilometers with ERCA.”

The Army isn't stopping there.

Murray, testifying before Congress in September, said that the Army is pursuing a strategic cannon that can fire on enemy positions as far as 1,000 miles away.

“We are looking very hard and starting down the path of hypersonics and also looking at what we call the Strategic Long Range Cannon, which conceivably could have a range of up to 1,000 nautical miles,” around 1,150 miles, the commander explained, according to Military.com.