The Army's housing chief was relieved in August 2019. 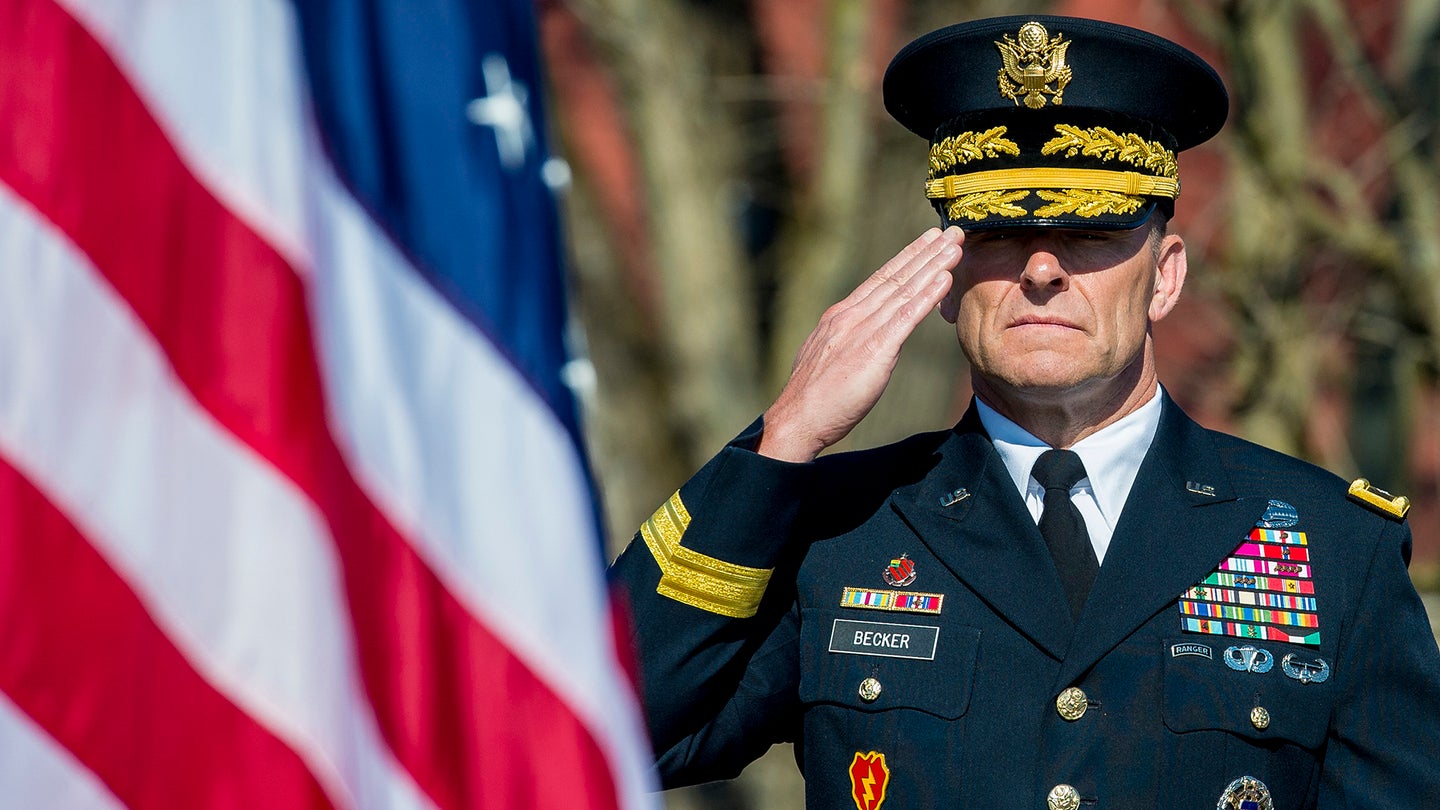 The mystery surrounding why Lt. Gen. Bradley Becker was relieved as head of the Army’s Installation Management Command in August 2019 has been lifted.

The Army issued a customarily vague statement at the time saying that Becker had been relieved “due to a loss of trust and confidence in his ability to command.” An Army spokeswoman said the service was conducting an investigation into Becker but she declined to say why or provide an exact reason for his firing other than it was not related to the command’s housing mission.

For years, Army housing has been plagued by problems, including mold and insects. A Task & Purpose investigation found that privatized housing companies were requiring service members and their families to sign nondisclosure agreements about unsanitary and hazardous living conditions. Becker was fired just as 88 homes at Fort Bragg, North Carolina, were found to be at risk for having dangerously high carbon monoxide levels.

It’s now clear that investigators were looking into an allegation that Becker had a relationship with a woman who was not his wife before he began divorce proceedings, according to a redacted copy of the report of the Army Inspector General’s Office investigation.

The investigation, which Task & Purpose obtained through a Freedom of Information Act request, concluded that Becker had “failed to show in himself a good example of virtue and honor and failed to guard against and suppress all dissolute and immoral practices, by engaging in an inappropriate relationship with a woman,” in violation of the Army’s policy on leadership and the U.S. Code.

“The preponderance of credible evidence indicated that LTG Becker was not forthcoming in his testimony in regards to the relationship he developed with [REDACTED],” the investigation found. “The totality of the circumstances (phone calls, gifts, intimate emails, and booked vacations) leads a reasonable person to conclude that LTG Becker and [REDACTED] were engaged in an inappropriate relationship before [REDACTED] filed for divorce.”

A note from the investigating officer said that “Becker’s demeanor was professional throughout the interview.” However it went on to say that the investigators “felt that some of his testimony was not credible.”

Becker told Task & Purpose via email that he accepts the Army’s decision to relieve him, but he does not agree with it.

While he communicated with a woman who was not his wife while he was separated and during his divorce, Becker insisted that his relationship with the woman was not physical until after his marriage had officially ended.

Becker also said that he was relieved solely because he was communicating with the woman while he was going through the divorce process, and that was enough for the Army’s leadership to lose confidence in his ability to lead.

“There is a difference between substantiating misconduct pursuant to the Uniform Code of Military Justice (e.g. Art 92 or 134 of the UCMJ) and a finding related to an Army Regulation (AR) and Article 10 section broadly governing ‘exemplary conduct,’” Becker said.

Becker made that distinction because adultery is a punishable offense under the Uniform Code of Military Justice. The military is not shy about punishing commanding officers for having extramarital affairs. Rear Adm. Stephen Williamson was fired in August 2019 as director of industrial operations at Naval Sea Systems Command in Washington, D.C., after an investigation found he had an affair with a subordinate employee.

And former Air Force Maj. Gen. Peter Gersten was demoted to colonel following an investigation, which found he had inappropriate relationships with three women between 2010 and 2019.

Becker said that he began the process of ending his marriage in September 2018 and by that December, he and his wife had a legally binding financial agreement on how the two would manage their finances until their divorce was complete.

“The background is important to understand that my divorce was not the result of an extramarital affair,” Becker said. “My decision to ask my ex-wife for a divorce was based on a personal assessment I made about what I wanted in the future following my father’s death in 2017 at the age of 78 and my mother’s struggle with [chronic obstructive pulmonary disease] which eventually took her life in January 2019. These events caused me to assess my life and future.”

Becker’s divorce lasted from January to May 2019, according to the investigation. He was remarried in June 2019.

Around that time, the Department of the Army Inspector General Agency began receiving anonymous complaints alleging that Becker’s relationship with the woman who became his new wife began while he served as the chief of the Office of Security Cooperation-Iraq from 2017 to 2018.

Becker insisted to investigators that his personal relationship with the woman, whose name was redacted from the report, began after his divorce and until then they had simply been colleagues and friends.

Several people told investigators that they never saw Becker and the woman engage in public displays of affection before they were married and there were no rumors that the two were in a relationship while he was in Iraq.

Investigators did not initially find any evidence that Becker had been involved in an improper relationship when they checked his government account emails, according to the investigation.

Becker told investigators that he decided to marry the woman so quickly after his divorce because “he had concerns about how he could provide for her if she was not his spouse” and he was worried about the perception of her living with him if they were not married, the investigation found.

“When he and [REDACTED] made the decision that they were going to move faster with their marriage, he realized there were people that he knew in the Army that did not know he was going through a divorce,” the report of investigation says. “They would be a little bit surprised when they found out he was divorced and remarried.”

At first, Becker’s description of his relationship with the woman sounded credible, according to the investigation, but “his testimony became questionable” during a subsequent interview when he was shown evidence provided by an anonymous source that included a series of email exchanges he had with the woman in December 2018.

Becker confirmed to investigators that he had sent the woman an email that read: “You are the most beautiful woman in the world. I love you.”

However, he explained “there was a big difference between ‘I love you’ and ‘being in love,’” according to the investigation.

Ultimately, investigators were not persuaded by Becker’s explanations for using words such as “love” and “beautiful” to describe the woman as well as other evidence that indicated the two were closer than friends.

Becker also described the emails he exchanged with the woman in December 2018 as “benign.” While the two talked about meeting after his divorce was final, “there was no physical relationship at any time,” he said.

He added that he and the woman had initially planned to spend time together but they ultimately decided not to because his divorce had not been signed yet.

“We both went to great lengths to ensure we didn’t see each other physically until the divorce was final,” Becker said. “Additionally, the woman I was communicating with was not married and never worked for me.”

It’s been more than two years since Becker was relieved and he said he has accepted the Army’s findings and moved on with his life.

“I have two terrific boys (young men) currently serving in the Army and want them to be able to make their own way without having to hear about their dad,” Becker said.

UPDATE: This story was updated on Oct. 27 to include information on longstanding problems with Army housing.