In January, Lt. Col. Khallid Shabazz received the call every Army chaplain dreams of, the call that validates years of... 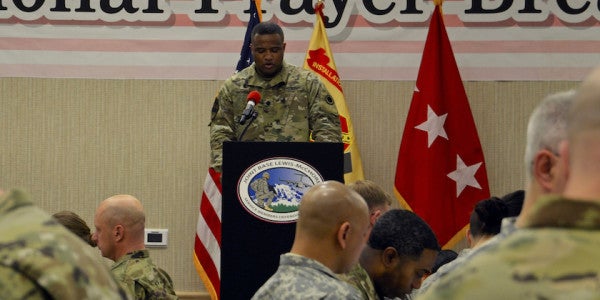 In January, Lt. Col. Khallid Shabazz received the call every Army chaplain dreams of, the call that validates years of intense study and hard work toward keeping the U.S. military in good spiritual health.

He was offered the job of chaplain for an entire division, an honor for anyone in his field but a milestone in his case. After a ceremony this summer, Shabazz will become the first Muslim division-level chaplain in the history of the U.S. military — a Muslim spiritual leader for more than 14,000 mostly Christian soldiers.

Shabazz, who’s dedicated his life to working across religious lines, found it hard to keep calm as he received the news at his desk on Joint Base Lewis-McChord near Tacoma, Wash.

“I’m on the phone saying, ‘Thank you, I appreciate it. I’ll serve honorably,’ and then I hang up the phone and I’m jumping all around like a little kid,” Shabazz, 48, recalled in interviews in February. “I was running around the office saying, al hamdulillah, al hamdulillah, praise be to God!”

To get a sense of what a long shot this might’ve seemed like to Shabazz, consider the numbers: He’s one of only 10 Muslim chaplains in the entire U.S. military; of the Army’s 1,400 or so chaplains, just five are Muslim.

“When you get the call saying you have been bestowed a division, the news is kind of like, unearthly,” Shabazz said. “The list is so small and it’s such a tough cut.”

With four months until the ceremony that will make him chaplain of the Army’s 7th Infantry Division at Lewis-McChord, Shabazz has plenty of time to think about taking on such a visible role in an age of open anti-Muslim hostility. He’d like to think his transition will be as smooth as those of his Christian peers, but he knows that not everyone will welcome him as warmly as the senior officers who gave him a standing ovation when the news was announced at a meeting on base.

“For me, a regular old guy from Louisiana, I look to the heavens and say, ‘Why me?’ “ Shabazz said. “As the day gets closer, I’m sure I’ll have more anxiety and think about it more. I’m extremely proud to have been on this journey for 20 years and never would’ve imagined that I’d be chosen to be the first.”

“Islamic guy in a leadership position?” he said. “If I think about it too much, it’ll get overwhelming.”

Shabazz came into the world as Michael Barnes, born into a large Lutheran family in Alexandria, La., about three hours from New Orleans.

Faith was at the center of the household. His mother took the family to church three times a week and recited prayers with her children each night. Shabazz, a lifelong athlete with a 6-foot-5-inch, 255-pound frame, had to study catechism before he could play football and basketball on Saturdays.

Other kids might’ve grumbled about such a rigorous worship schedule, but Shabazz said he didn’t mind — from an early age, he was taken with the spirit of friendship and service.

“I like people who have a commonality of purpose,” Shabazz said. “We loved each other. If people had rent problems or other problems, the church pulled us together to take care of those problems.”

After high school, Shabazz headed to Jarvis Christian College, a historically black college in the small town of Hawkins in eastern Texas. Upon graduation, he returned to Louisiana and began teaching biology to fifth-graders at an elementary school in his hometown. He said he wasn’t prepared for how despondent he became at seeing so many children whose growth was stymied by poverty or poor parenting; he struggled to accept that he couldn’t help them all.

After just six months, he quit. At age 23, he decided to join the Army, thinking that it would help him mature and make him a better, stronger teacher afterward.

“I thought, ‘I’ll do 20 years in the military and then I’ll teach and coach,’” Shabazz said. “But I fell in love with the idea and the paradigm of the military.”

While stationed in Baumholder, Germany, Shabazz worked the motor pool with a Muslim soldier who annoyed other troops with his boasts about the virtues of Islam. Shabazz, who back then was still Christian, grew fed up and decided “to cut him down to size.” He challenged the Muslim to a public debate on the merits of their respective religions.

On the afternoon of the showdown, Shabazz recalled, about 30 soldiers filled a meeting room on base. Shabazz was ready to pounce, but the Muslim opponent “kind of blindsided me with some facts,” launching into a powerful, persuasive defense of his faith that put Islam in a whole new light.

Shabazz, stunned, was down for the count.

“It was all-out cognitive dissonance, depression and shame, honestly,” Shabazz said, recalling his feelings at that moment. “I thought I had a stronghold on the truth. And, for the first time, my confidence was shaken in who I was as a human being and what I believed.”

Shabazz began studying Islam on his own, determined to correct the lack of knowledge revealed in his debate with the Muslim soldier. He’d work all day and then stay up well past midnight paging through the Bible and the Quran. He described it as going into a “cubbyhole.”

After two years, Michael Barnes, the devout Christian reared in a Louisiana church, decided to convert to Islam, taking the name Khallid Shabazz to complete his transformation. He said that there had been no single tipping point in his thinking, just a deep identification with Islamic tenets, such as the lack of a clerical hierarchy and the emphasis on charity.

“One of my favorite passages in the Quran asks if the man who thinks and the man who does are the same,” Shabazz said. “It’s the thinking component in Islam that really intrigued me. I am in control of my grace, and I don’t have to answer to the imam. I tell my congregation, ‘Listen, you have to do your own research.’”

Unsurprisingly, Shabazz’s conversion did not play well with his family in Louisiana, where he’s still known as “Michael.” He said it took years for them to accept the change, but now they tease him about praying on time and make him a special gumbo minus the pork sausage. Such conciliatory gestures, Shabazz said, must go both ways.

“I do still go to church with my family — that’s an important part of reaching across the aisle,” he said. “It would be improper for me to disrespect something that instilled in me so much of who I am.”

Shabazz’s switch in faiths didn’t exactly go smoothly with the military, either. He had to write memos for even the smallest religious accommodation, such as time to perform the traditional Friday prayers. He’d fast during the holy month of Ramadan, though his schedule called for grueling work in the field. Ravenous by the end of the day, he’d come to the mess hall only to find pork chops. He’d raise concerns with his superiors from time to time, but made little headway.

“When you have an unknown there, sometimes the leadership kind of treats you unfairly because they’re not educated into what you’re doing,” Shabazz said. “In defense of them, I didn’t explain it very well, either. I was growing. There were some tough days.”

On one of the toughest days, Shabazz was exhausted from a series of 12-hour shifts and hungry because of the lack of pork-free meals. Sitting outside on an M109 howitzer, he felt his frustration spill out in tears. Nobody’s here for me, he thought. Maybe this organization is not for me.

A passing chaplain noticed Shabazz’s distress and stopped. In an hourlong impromptu ministry session, the chaplain let Shabazz pour his heart out about his struggle to carve a space for himself in the military. After listening, Shabazz said, the chaplain mentioned that the Army had recently received its first active-duty Muslim chaplain: Would that kind of path interest Shabazz?

“I’m telling you, it was like a revelation from God,” Shabazz recalled. “Once it came out of his mouth, I said, ‘That is my calling. That is what I want to do for the rest of my life.’”

Shabazz has now been in the Army for 26 years, 18 years as a chaplain. He’s been deployed seven times — including Iraq, Kosovo and a stint at the U.S. prison camp in Guantanamo Bay, Cuba, where he was sent to advise commanders on religious issues after a string of scandals.

Over the years, a handful of people have refused to work with Shabazz because he’s Muslim. That doesn’t bother him — he lives by the chaplain’s motto of “perform or provide,” so if he can’t minister himself, he’ll recommend a chaplain of a different faith. But Christians who do agree to be seen by Shabazz are often surprised by his fluency in the Bible’s teachings, a vestige of his many years in the church.

“Because I have the language from my days as a Christian, I can give them Scriptures from the Bible, and that doesn’t violate my religion,” Shabazz said. “My job is not to convert anybody to Islam. God guides people. My only goal is to have people leave my office stronger than when they came in.”

Sometimes, though, soldiers do convert and turn to Shabazz for guidance as they enter Islam. One of the most unusual conversions came just three months ago, Shabazz said. A master sergeant in the Special Forces — a man who’d come to no Friday prayers or study groups — showed up, crying, to meet with Shabazz. He told the imam he was ready to take shahada, the modest ritual to officially accept Islam.

“He said, ‘I heard you’re a good chaplain. I’ve been thinking about Islam for about three years,’” Shabazz recalled. “I took him down to the mosque, he took shahada and I’ve never seen him again.”

Shabazz appreciates the historic aspect of his rise but views it all pragmatically: He immersed himself in studies, devoted himself to interfaith work and completed four master’s degrees and two doctorates. In other words, he earned it, his ascent proof of the old line that the military is a meritocracy — after all, where else could a Muslim get a high-profile job in a U.S. government institution these days?

But Shabazz knows, too, that there are sure to be bumps ahead, tests of how well the military can insulate itself from the cultural battles that have cleaved the nation in two. Two verses are at the forefront of his mind these days — one from the Quran, one from the Bible, both about how hatred of a people has no place among the faithful.

“Some of the challenges will be really changing perceptions, changing mindsets, showing that I am something other than what they see — the guy on TV, the boogeyman,” Shabazz said. “I have a real opportunity to be an ambassador for the Army and for my religion.”