After decades of failed attempts, the Army and Marine Corps are getting closer to making brass-cased ammo a thing of the past 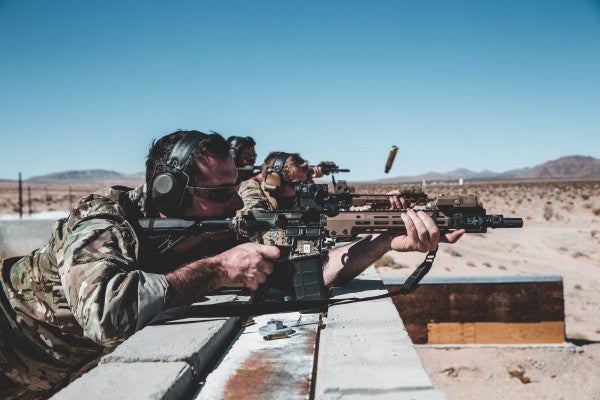 After more than 50 years of failed attempts, the U.S. military may be on the verge of ending its love affair with brass-cased ammunition, something that predates the Spanish-American War.

Traditional brass has dominated military small-arms ammunition since U.S. troops stormed up San Juan Hill, Cuba, in 1898. The robust material performs well in the violent, super-heated space of weapon chambers during firing, but its sheer weight has always been a problem for infantrymen and logisticians alike.

Both services have launched multiple efforts to lighten the weapons and equipment grunts carried while fighting in Iraq and Afghanistan, but ammunition weight has always been an Achilles' heel for these efforts.

“We have not gotten lighter in the last 20 years,” Lt. Gen. Eric Smith, commander of Marine Corps Combat Development Command, told House Armed Services Committee members at a March 5 hearing. “We have slowed the rate of weight increase, which is unacceptable.”

In early January, the Corps announced it plans to invest up to $10 million in polymer-cased .50 caliber ammo to test in the “Ma Deuce” M2 machine gun, a potent weapon used by both Army and Marine mounted combat units.

The Army's role in the Joint Lightweight Ammunition Integrated Product Team is to find a lightweight-cased replacement for brass-cased 7.62x51mm, the caliber used in Army and Marine M240 machine guns and some sniper weapons.

“The ultimate goal is to replace brass-cased ammunition for all 7.62mm ammunition in the Army,” Becky Leonard, spokeswoman for the Joint Program Executive Office for Armaments & Ammunition at Picatinny Arsenal, New Jersey, told Military.com.

The Army is also evaluating lightweight-cased 6.8mm ammunition for its Next Generation Squad Weapon (NGSW) effort, which is designed to replace the M4A1 carbine and M249 Squad Automatic Weapon with more potent weapons that significantly lighten ammunition weight.

Two of the three firms competing in the final phase of the program — Textron Systems and General Dynamics Ordnance and Tactical Systems Inc. — use polymer-cased technology for their lightweight 6.8mm cartridges. The third, Sig Sauer Inc., uses a more traditional brass-case design with a stainless-steel base to save weight in its NGSW prototypes.

But this is not the first time the Army has launched futuristic infantry weapon programs involving lightweight ammunition; previous attempts resulted in failure.

In 1951, the service developed the Special Purpose Individual Weapon, which fired plastic-cased 12-gauge rounds filled with multiple flechettes, or darts, in an attempt to increase the probability of hitting enemy targets.

The Advanced Combat Rifle program, launched in 1986, pursued a similar goal, with several of the prototypes featuring plastic-cased ammunition.

The Army took a renewed interest in lightweight ammunition after 9/11, when combat troops began to struggle under heavy combat loads in Iraq and Afghanistan.

“Soldiers on combat patrols in Afghanistan typically carry 92 to 105 pounds of mission-essential equipment … this overload causes fatigue, heat stress, injury and performance degradation for soldiers,” according to a 2005 report by the Armament Research, Development and Engineering Center (ARDEC) at Picatinny Arsenal on “Alternative Cartridge Case Material and Design.”

“Despite years of research and development, the Army's weapons and equipment [are] still too heavy to allow foot soldiers to maneuver safely under fire,” it states. “The only way to fully realize lightweight concepts is to look at novel ways of designing the system, such as allowing the use of lightweight polymer composites for cartridge case applications.”

Perhaps the most successful weapons programs involving polymer-cased ammunition were launched in 2004 under the Army's Lightweight Small Arms Technology (LSAT), which resulted in successful tests of a special case-telescoped (CT) ammunition in lightweight machine gun prototypes chambered for 5.56mm and 7.62mm, and a rifle prototype chambered 6.5mm CT ammo.

Textron has incorporated the CT technology developed in LSAT into the 6.8mm cartridge it designed for its Next Generation Squad Weapon prototypes. The technology relies completely on a plastic case to hold the propellant and the projectile.

The move to polymer-cased ammo

While the commercial ammunition market may stick with brass, Wayne Prender, senior vice president for Applied Technologies & Advanced Programs at Textron, told Military.com that he is convinced that the U.S. military will eventually have to move toward polymer-cased ammo.

“Weight is a significant factor for a military application, more so than a commercial application or sporting application,” Prender said. “You are carrying significantly more with significantly less support structure. Ounces may not matter if you are going out for a hunt, but ounces matter when … your life depends on it.

“That is why weight is such a significant factor in a military application and why we endeavored on it.”

“It's not a new concept. The U.S. Army has had a lightweight ammunition requirement for going on 40 years now. It's just [that] nobody has been able to bring a viable solution to the table,” said Pat Hogan, chief marketing officer for True Velocity. “I think that the technology has arrived. … we have proven that it is viable.”

Both Textron and True Velocity maintain that their polymer-cased ammo designs offer about a 30 percent weight savings over brass ammunition, but also bring increased performance.

In 2005, polymer-cased technology suffered from too many flaws to perform adequately under harsh combat conditions, according to findings in the ARDEC report.

Since then, companies like Textron and True Velocity have learned how to solve the problems highlighted in the report, such as “cracks on the case mouth, neck, body and base” and “insufficient high temperature resistance.”

“Brass is a conductor of heat, and our composite case is an insulator,” Hogan said. “Brass conducts the heat during the ballistic event; the brass superheats and then transfers that heat to the chamber of the weapon, whereas polymer insulates the chamber from that heat.”

Excessive heat buildup can cause ammo to cook off or explode in the weapon, a problem True Velocity's case technology has licked, he said.

“Anecdotally, we have run cook-off tests through some of the belt-fed platforms and, in order to get the gun even hot enough to be in a position where you could even have a cook off, we have to run brass ammo through a gun to get it hot enough where you can really test our ability to withstand cook-offs,” Hogan said.

The cylindrical design of Textron's case-telescoped ammunition “really allows you to minimize exposure to heat,” Prender said, explaining that the weapons system and CT ammo work together to dissipate heat.

“We deal with heat a little bit different,” he said. “Our chamber [pivots or rotates], which enables us to remove the chamber and ammo from the latent heat that may exist after [each] round fires.”

Other companies have shown enough promise in polymer-cased ammo technology to attract the military's interest.

The Marines awarded a contract worth up $10 million to MAC LLC for polymer-cased .50 caliber ammunition.

Military.com reached out to MAC LLC but did not receive a response by press time.

Marine Corps Systems Command (MCSC) officials say that the contract is not an indication that the Corps plans to select MAC LLC polymer-cased ammo as an alternative to brass ammunition.

“The Marine Corps has not selected this polymer ammo as a replacement,” Emanuel “Manny” Pacheco, spokesman for MCSC, recently told Military.com. “The current contract will provide ammunition for user evaluation. Future contracts will be informed by the results of this evaluation.”

But Lt. Col. Bill Lanham, MCSC's deputy program manager for ammunition, sounded confident, in the contract award announcement, that the Corps will one day transition to polymer-cased ammo.

“When we go to war, we need more ammo to defeat our adversaries,” Lanham said in a Jan. 17 news release. “Polymer ammo gives Marines the opportunity to carry more ammunition or make trades with what gear is important to carry during combat.”

The Marines plan to test the polymer-cased .50 caliber ammo in an operational validation scheduled for the third quarter of fiscal 2021.

Meanwhile, the Army's search for polymer-cased 7.62x51mm identified “three lightweight ammunition designs” and is currently conducting a series of pre-validation tests, said Leonard, who did not name the vendors or the lightweight materials used in the designs.

“Once the pre-validation test is completed on all three-lightweight ammunition [designs], the Army will downselect a design and award a contract to the selected vendor to deliver rounds for qualification testing,” Leonard said.

The Army is assessing the production requirements for lightweight 7.62mm ammo that meets the current brass-cased ammunition requirements, she said, adding that the service hopes to obtain a low-rate initial production contract in late fiscal 2023.

The advancements in polymer-cased ammo, however, provide more than just weight savings, both Prender and Hogan said, explaining that the polymer cases can be molded to enhance accuracy and ballistic performance.

Engineers have learned how to shape the internal geometry of the case to allow the propellant, or powder, to perform more efficiently, Prender said.

With a brass cartridge case, “you can't do anything to change the interior geometry,” Hogan said.

“We can change the wall thickness or the interior shoulder angle or the configuration of the bottom of the cartridge case — a lot of things to manipulate the ballistic event and basically shape the charge,” he added.

For Prender, it's all about the science.

“It really gets into advanced materials and material science, which is really allowing us to push to the next level,” he said. “There is a reason why legacy weapon systems have kind of reached a ceiling and their ability to get better is incremental at best, so you need an enabling technology.”