No more shortcuts: The Army’s marksmanship test is about to get tougher

Good luck with that. 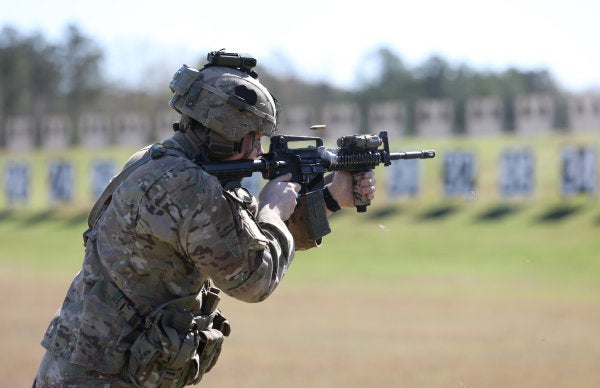 The U.S. Army's new strategy to improve marksmanship will eliminate a shortcut that units use for individual weapon qualification — a long-standing practice that has eroded lethality over the years, infantry officials said.

Army officials at the Infantry School at Fort Benning, Georgia are awaiting final approval of the new marksmanship manual that will prepare the Army for a new, and much more challenging, qualification test.

The new course of fire — which forces soldiers to make faster decisions while firing from new positions — will drastically update the current, Cold War-era rifle qualification course. That course required soldiers to engage a series of pop-up targets at ranges out to 300 meters.

The stricter qualification standards will also do away with the practice of using the Alternate Course of Fire, or Alt. C, to satisfy the annual qualification requirement, Sgt. 1st Class John Rowland, marksmanship program director at Benning's Infantry School, told Military.com.

Alt. C is an Army-approved 25-meter course in which soldiers shoot at targets scaled down in size to represent actual target sizes out to 300 meters. At that short range, however, the trajectory of the 5.56mm bullet is extremely flat and unaffected by wind, making it easier to score hits, experts say.

“It is an approved qualification that largely has been abused, based off of lack of training management and proper planning. And it has come at the cost of lethality,” Rowland said. “That is going to be very impactful for units because they are very used to not being very proactive and not being able to fall back on, 'well we'll just do Alt. C.' And that is no longer going to be the case.”

Army training officials at Benning have been spent the last two years validating the training strategy and course of fire for a new marksmanship qualification standard that is designed to better prepare soldiers for the current operational environment, according to Melody Venable, training and doctrine officer for the Infantry School.

“We have visited various units across the Army, and we have tested and validated parts of it as needed,” Venable said.

Soldiers who have shot the new course “are doing very well at it,” Venable said.

“They appreciate the training that the training strategy provides, and they enjoy the course of fire because it's more realistic,” she said.

The new qualification course is designed to use the current marksmanship ranges across the Army.

“It's still 40 targets; it's still 40 bullets,” Rowland said. “It's the same targets that people have been shooting at for years.”

But the new course adds the standing position to engage targets on two occasions during the course in addition to the kneeling and prone positions. The course requires soldiers to change magazines on their own and seek cover on their own while they engage multiple targets at the same time, Rowland said. The current course consists mainly of one-at-a-time target exposures.

The next milestone in the effort will come when Brig. Gen. David Hodne, commandant of the Infantry School at Benning's Maneuver Center of Excellence, signs the new manual that will guide the marksmanship effort so it can be published and sent out to the active force, National Guard and Reserve, Venable said.

Once that happens, leaders throughout the Army will have time to provide feedback on any challenges they might face in putting the new qualification strategy into action.

“Units have 12 months from the time of publication to provide the Infantry School and the MCOE with feedback on their issues with implementation of the training strategy or the course of fire,” Venable said, adding the many of the ranges across the Army are likely to require some updating.

“At this time, we are not there with a hardcore implementation date. … We don't know all the second- and third-order effects that the changes are going to produce.”

But one of the clearest differences of the new qualification standards is that Alt. C is no longer a valid qualification, Rowland.

“That is going to be a huge change for the Army,” he said.

Army units can still use Alt. C to extend their annual qualification rating by six months if a deployment or high operational tempo prevents them from going to a range and qualifying with the new course of fire, Venable said.

“In areas where they don't have range access — let's just say they are downrange and they are 250 miles to a primary range — units can use Alt. C because they can't get a range. However, they have to have a general officer approve the use of Alt. C,” Venable said. “They still have to come back and shoot the course of fire to qualify.”

Using Alt. C extends a soldier's current rating of marksman, sharpshooter or expert, but it cannot change it, Rowland said.

“If you are marksman and you conduct a validation event and you get a perfect score — you are still a marksman; you are not expert,” Rowland said.