Army May Have to Buy More JLTVs to Replace Humvees 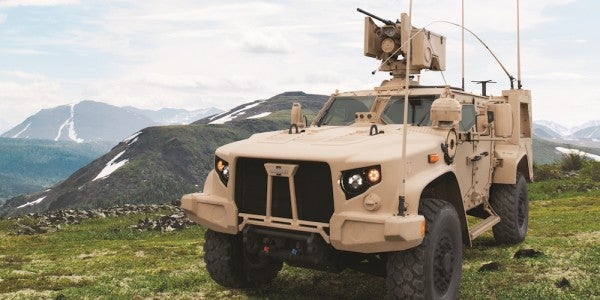 U.S. Army modernization officials told lawmakers Wednesday that the service will soon have to rebuild its outdated Humvee fleet or buy more Joint Light Tactical Vehicles, or JLTVs, than expected.

Senior Army leaders testified about modernization efforts at a hearing before the Senate Armed Services Committee’s Airland Subcommittee, headed by Tom Cotton, a Republican from Arkansas.

Focusing on fiscal 2019, Sen. Joe Donnelly, an Indiana Democrat, asked about the Army’s long-term Humvee modernization effort. The Humvee is made by AM General LLC, based in South Bend.

“When do you think we can expect to see a comprehensive Humvee modernization plan with an associated program of record?” he asked.

The service is slated to buy more than 49,000 JLTVs to replace the Cold War-era Humvees. The Army awarded a $6.7 billion contract in August 2015 to Oshkosh Corp. to build the first 17,000 JLTV production models.

Service officials will have to make a decision about the Humvee fleet in 2018, Lt. Gen. John Murray, deputy chief of staff for financial management, Army G-8, told lawmakers.

Currently, the service has a 50-50 mix between the JLTV and the Humvee total requirement, Murray said, explaining that the average age of the Humvee fleet is about 9.5 years.

“We try to maintain less than 15 years, so we are in good shape for another couple of years in terms of the age of the Humvee fleet,” he said.

The total contract to Oshkosh is projected to be worth up to $30 billion, as the Army and Marine Corps plan to buy nearly 55,000 of the combat vehicles, including 49,100 for the Army and 5,500 for the Corps, to replace about a third of the Humvee fleets.