A mother says these patriotic lights honor her soldier son. Her HOA says they’re a violation

Nancy Turner's modern version of keeping a candle in the window while her soldier son is away is a string of electric lights on the front porch that burn red, white and blue. 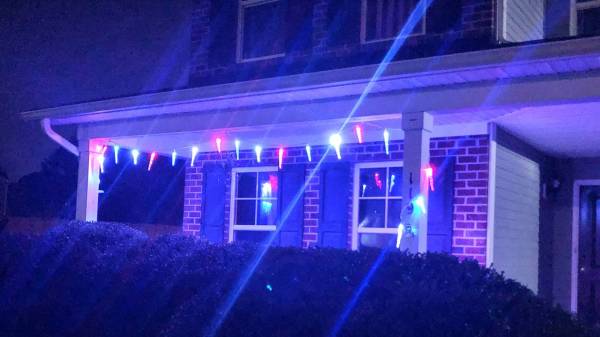 Nancy Turner's modern version of keeping a candle in the window while her soldier son is away is a string of electric lights on the front porch that burn red, white and blue.

But where Turner sees patriotism and support for the troops, her Garner homeowners association sees a covenant violation and a potential $50-per-day fine.

Turner was surprised to receive a threatening email last week after an employee from Sentry Management, which manages the Sheldon Place HOA, spotted the illegal illumination during a neighborhood patrol.

“I honestly had no idea it would be a problem,” Turner said.

The HOA did not immediately respond to a request for comment sent as a message through its Facebook page.

Turner had bought and hung the lights a few weeks before Christmas. Back then, they were red, white and green.

But during the first week of January, as tensions escalated with Iran and 3,500 members of the Army's 82nd Airborne Division at Fort Bragg were ordered to ship out, Turner was sitting on the front porch with her daughter, Melanie, worrying about those young troops. She had heard about missiles being fired onto the U.S. base in Iraq's Anbar Province, which Iran later said was in retaliation for U.S. forces killing Iranian general Qasem Soleimani on Jan. 3.

Turner's son joined the Army not quite a year ago. He's a member of the 82nd.

“I was sitting there playing with apps on my phone,” she said, when she remembered the one that controls the lights. She tinkered with different holiday offerings until she hit on Independence Day and the lights turned the colors of the flag.

When she took down the rest of her Christmas decorations, Turner left up that one string of plastic icicles that now, from a distance, look a little like patriotic chili peppers.

Turner knew the neighborhood had a homeowners association with certain rules when her family bought the brand new house on Dabney Ridge Place in 2006. She has appealed to the HOA for help at times, she says, such as when broken-down cars have been left to sit on neighborhood streets or a neighbor refused to pick up trash left in the yard or to plant grass to reduce water runoff.

“I am in no way criticizing the HOA board,” Turner said, noting that the board and the management group are different entities.

Nearly 14,000 homeowners associations were operating across North Carolina in 2017, representing condominiums, planned communities and cooperatives with more than 2.8 million residents, according to the Foundation for Community Association Research. That was more than a fourth of the state's population. Disagreements seem inevitable.

Last year a Wake Forest couple sparred with their HOA over the placement of a flag in their yard to honor their son who was killed in a mass shooting in Illinois.

It irked her, Turner says, that the first she heard that the lights might be an issue was not a call to say, “'Hey, Nancy, can you do something different?' But to get a letter saying, 'You're out of compliance and if you don't take them down, you're going to be fined,' I was just shocked.”

Turner says she sent an email back to Sentry to explain that these were no longer Christmas lights, but were now serving to honor and remember her son and others like him in the service of their country. There was some back and forth, Turner says, with Sentry explaining that this was not an allowed use of holiday lights, which it said could be displayed from five weeks before Christmas to three weeks after.

What holidays get lights?

Turner said she pointed out a number of other holidays she might like to low-watt celebrate, including Valentine's Day and St. Patrick's Day.

Sentry was willing to allow Turner a couple of days to honor cupid in LED red, she says, but after that, the lights would have to come down or the $50 fines would start to rack up.

Since the dispute started, Turner says, she has reached out to a couple of her neighbors to ask whether they found the lights offensive. One had seen them and correctly assumed they glowed in her son's honor. Another asked, “What lights?”

In reviewing the HOA agreement, Turner found the specs on putting up and taking down holiday lights, but said, “Nowhere in there does it say you can't have decorative lights outside your house. It does say seasonal lights five weeks prior and three weeks after, but it never explains what those holidays are.

“And there is a house in the neighborhood with white lights all over the fence, and those have been there for I don't know how long.”

Turner, who works for a financial planner, said she can't afford many days of fines and anyway, doesn't want to create issues in the neighborhood. So she has decided to take the lights down on March 9, three weeks after Presidents' Day.

But the whole affair has struck a nerve. Since Jan. 1, at least 10 U.S. service members have died, including three with North Carolina connections. Two of them were members of the 82nd Airborne.

“I did dig in on this because my main purpose is to support my son, first and foremost,” Turner said. “But I also want to support all young people who are serving in our military.

“I have a right to say what I feel because of freedom of speech. And the reason I have those lights up there is to support those men and women who are defending our rights, who are away from their loved ones and don't know if they're coming back.”

She'll take the lights off the porch, she says.

“I'll bring them inside and hang them over the windows.”