Chantele's seven years in the National Guard is the subject of the Pittsburgh rapper’s ambitious and sometimes harrowing new concept album, “A Golden Opportunity." 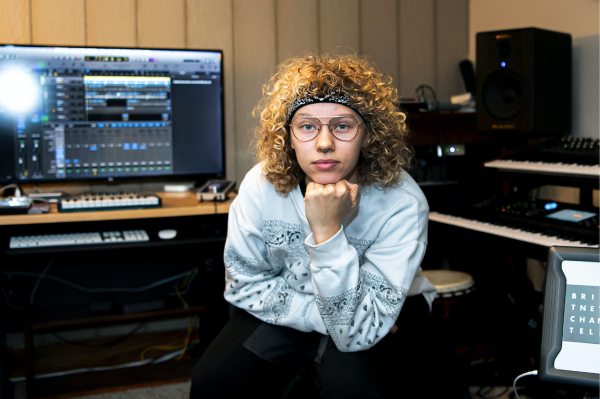 “He saw that I wasn’t eating and asked why,” she says. “I said I didn’t have any lunch money, and he ended up buying me lunch and he also gave me a Marine Corps tracksuit.”

She grew up in a military family, so she was open to talking with him.

“For me that was, ‘Wow, these guys really take care of you.’ That was the start of me really getting brainwashed.”

Joining the Marine Corps JROTC program, she says, gave her a new sense of purpose.

“That was, like, the one thing in high school I was good at. I wasn’t good at sports, I was good at JROTC. I was the most decorated cadet there. It was just very validating and reaffirming that I was good at something.”

At 18, she took the next step and enlisted in the Army National Guard. Her experience over the next seven years is the subject of the Pittsburgh rapper’s ambitious and sometimes harrowing new concept album, “A Golden Opportunity.”

The 27-year-old biracial artist/activist with the curly blonde locks, blue bandanna and wire-rimmed glasses is a member of 1Hood Media, the local nonprofit founded by Jasiri X and Paradise Gray that guides young artists in Pittsburgh.

She was recruited by 1Hood after Jasiri, an award-winning rapper and educator, was taken by her performance at Boom Concepts in late 2017. Side-by-side with Christian Carter, she was on the front lines last year of the protests that followed officer Michael Rosfeld’s acquittal in the death of Rankin teen Antwon Rose II. Stone-faced, barking out chants with a bullhorn, she contributed to the guerrilla theater of those marches.

Those expecting to find her fiery activism on record were surprised, perhaps, when she followed the protests by releasing “A Fire in Venus,” an album that delved into her romantic life with a female partner.

What she had brewing in the background was “A Golden Opportunity,” a powerful 13-song album portraying the hardships she endured at military training facilities in the South.

“We’re marching around Fort Sill in Oklahoma saying ‘left-right-kill’ and really romanticizing war,” she says. “We sang these things, though, with a smile on our face, and it was motivating. It was so weird. Forty people marching in step singing it. You’re tossed in with people that you don’t know, some of them don’t even know where they are.”

The environment, the drills, the language, the separation from friends and family, the lack of a cellphone and the 4:30 a.m. alarm — it didn’t necessarily fit with her artistic temperament, but she bought in to an extent.

“(The Army) has to figure out how to make you feel like you’re a part of something,” she says. “What better way to do that than to make you all look the same, act the same, dress the same and sing the same thing.”

Then, she says, she was sexually assaulted multiple times and coerced into silence.

“When you join, you really have a high standard of what your peers are going to be like,” she says. “You’re told that it’s a brotherhood, it’s a sisterhood, you have each other’s backs, everybody loves each other and would take a bullet for each other. But then in 2018 we have over 20,000 military members who have been sexually assaulted. It doesn’t make sense. It’s hypocrisy.

“Of course, sexual assault, homophobia and xenophobia, all those things happen outside of the military, but in the civilian world, nobody signs a contract saying they’re going to live up to the seven Army values. I always say, within those seven Army values, which I’ll never forget because they were drilled into my head — leadership, duty, respect, selfless service, honor, integrity, personal courage — out of those seven, if you are sexually assaulting somebody, you are directly violating at least five. Possibly all of them.”

When told in 2012 that her unit was going to be deployed, she avoided it by signing up for cadet training at Edinboro University. A few years later, at Christmas dinner, she told her family — her veteran dad and two military brothers among them — that she wasn’t “feeling it anymore.”

“I wasn’t as vocal and articulate as I am now,” she says, “so I wasn’t willing to talk about the harassment and sexual assault. I was saying in very broad sentences, like, ‘It’s really bad for women in the military right now, OK?’ They were confused. My parents were kind of quiet and my brothers, especially my one brother, he was trying to be the devil’s advocate. And that’s not what I needed then.

“With my other brother, it kind of clicked. I think he got it. He was like, ‘Oh, Brittney was sexually assaulted and she’s not having a good time in the military. Sometimes it’s really difficult for women.’

That tension hung in the air for the next month until she approached them, she says, in more stern fashion. “I’m your only daughter and your youngest and if I really am your baby girl,” she said “you wouldn’t want me in a position where I could die.”

That message got through, she says. Suffering from the aftermath of the trauma and diagnosed with fibromyalgia, she left the Army National Guard in 2018.

By that point, Chantele had already shared parts of her experience in her 2017 visual arts show at Boom Concepts, where she painted messages on the back of military uniforms. She says one older veteran sent her a letter criticizing her for never being deployed along with a self-help book. He said she had the wrong idea about the military and had to “work on herself.”

Although she’s sympathetic to his experience, she says she has to speak her truth.

“There’s been so many times when I’ve been making art for other people, painting something and thinking, ‘Oh, this is going to be too heavy for somebody’ or ‘too hard to digest’ or ‘this is going to make people mad,’ and I’m finally at the point in my artistry, where … I don’t care. These are my real stories and I need to talk about them.”

In the long tradition of anti-war, anti-military songs and albums, “A Golden Opportunity” is an original — a concept album about a young woman’s experience at boot camp.

If you’re expecting an angry, abrasive roar to emit from the speakers, like Public Enemy circa 1988, that’s way off.

The baseline of “A Golden Opportunity” is a smooth, jazzy, R&B, hip-hop feel full of pop hooks. Chantele manages to turn a song called “Fort Sill (Basic Training),” drill chants included, into what could be a radio single.

It was recorded in the home studio of her friend and producer Remy Vega, who supplies the beats and most of the guitars and keyboards, with guitarist Brandon Lehman, saxophonist Feral Cat and male characters played by Said, JM The Poet and co-writer Treble NLS.

Growing up on the West Coast, Vega’s go-to music was 1990s G-Funk, which incorporated jazz, soul and R&B.

“Jazz is a multi-faceted style of music because of the depth of the harmony, so I feel like it’s easy to translate complex emotions into sound that way. Because nothing is ever just, like, ‘I’m happy.’ Sometimes there’s loss in understanding a new level of happiness, or there’s sadness reflected. It’s always a voice of social commentary as well.”

Chantele, with fluid raps and a lovely singing voice, takes us through her story from the hypnotic opening of “Recruiters,” through the first assault in “Fort Gordon (AIT),” her struggle with fibromyalgia in “FibroMedicinal” and, ultimately, to the cinematic view of “#MeToo.”

On that final track she raps, “It’s crazy how awareness turns to begging for attention/Yes, we’re begging, we just need you to listen without tension.”

Chantele says she didn’t set out at first to make it a concept album. She walked around with bits and fragments in her head that she would sing or rap into her phone.

“I slowly kind of gathered these ideas,” she says. “As these situations happened or I started to realize the severity of them over time, I had these choruses and verses pop into my head. Melodies just come to me and they stick.”

Was making the record — supported by a partnership of The Pittsburgh Foundation and The Heinz Endowments with the Advancing Black Arts in Pittsburgh grant — more about personal catharsis or sending out a warning?

“Honestly, an even mixture,” Chantele says.

She talks to students and community groups and plans to add more engagements with this album’s release. When she speaks, she revisits what drew her in when she was 14.

“Nearly every time, (students) tell me things that I know for a fact aren’t true,” she says, “And it breaks my heart because I can see myself in them. I remember having those rose-colored glasses on in JROTC, thinking the military is something that it really isn’t and believing everything I was told.”

That said, she knows that everyone has to choose his or her own path.

“I keep telling everyone I’m not here to tell you what to do with your lives and I’m not going to say ‘Don’t join the military’ — unless someone asks my opinion on that directly. What I do want to do is tell my stories and that’s one thing people can’t argue. These are my stories and they’re real.”