For nearly four decades, combat units have painted their insignias on boulders near the road into the post 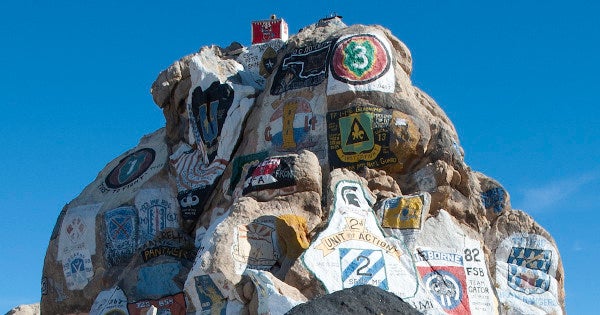 FORT IRWIN, California — Anyone who's been here has seen it: the field of brightly painted boulders surrounding a small mountain of rocks that symbolizes unit pride at the Army's National Training Center.

For nearly four decades, combat units have painted their insignias on boulders near the road into this post. It's known as Painted Rocks.

“It's a big tradition,” said NTC Command Sgt. Major Matthew Lowe. “The higher you go, the older they are. If you are out there and you look toward the top, you can see the old acorn for the 24th Infantry Division with a big three on there; that unit has probably been deactivated since 1994.”

Lowe was close; the 24th was inactivated in 1996, but the unit's painting is still old.

The tradition dates back to the mid-1960s when Col. Robert Osbourne, the post commander at the time, kept a concrete burro to represent the many burros that gather in San Bernardino County, where the post is located, Lowe said.

NTC did not exist yet, but units would come here to train before going to Vietnam, he said.

The 36th Engineer Battalion was here training and decided to paint Osbourne's burro.

“Of course, Colonel Osborne saw that and was not pleased, and they repainted it. And then, every couple weeks, this kept happening, where the burro kept getting painted,” Lowe said.

“One day, they went out there and burro was gone and, a couple of weeks later, Colonel Osborne got a letter from Private Burro in Vietnam, with a picture of him serving his country in Vietnam,” he continued.

Osbourne realized that this tradition was going to continue, so he designated an area where units could paint their insignia, Lowe explained. “And out there, Painted Rocks was born.”

Rock paintings near the entry to Fort Irwin attest to the units who once trained here.

The 3rd Infantry Division's 2nd Brigade Combat Team is currently at NTC, and “there will probably be five rocks added after this rotation because battalions like to do it; separate companies like to do it,” Lowe said. “The Japan Ground Self Defense Force was here in February with a company team, and they painted a rock and put it out there.”

NTC officials don't know exactly how many rocks have been painted.

“Since 1981, you figure every rotation — nine or 10 a year for the last 38 years — units have been dropping rocks there,” Lowe said. “And you don't paint over someone else's rock. That's a big no-no.”

SEE ALSO: Why They Went: The Inside Story Of The Standing Rock Veterans

WATCH NEXT: Meet The Army Helicopter Pilot Who Re-Supplied Thousands Of Hippies At Woodstock