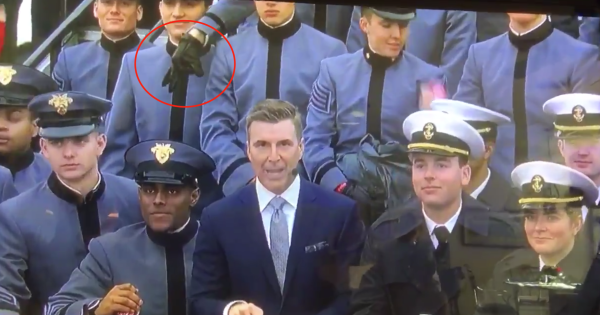 West Point is investigating a hand gesture made by several cadets and midshipmen during an ESPN pre-game broadcast at the Army-Navy game Saturday after clips of the signals went viral because of their association with white power.

“West Point is looking into the matter,” a spokesperson said in an emailed statement. “At this time we do not know the intent of the cadets.”

The Naval Academy did not return a request for comment about a similar gesture used by its midshipman.

During the broadcast at Lincoln Financial Field in South Philly, at least three or four students are seen flashing an upside OK sign with their hands behind reporter ESPN Rece Davis.

Many on social media expressed shock and outrage because of the symbol's recent association with white power. Others argued that the students were just playing a game.

According to a 2017 article from the Anti-Defamation League, use of the symbol began on the website 4chan as a “hoax campaign” to troll liberals. But this year, the ADL added the gesture to its hate symbols database, noting that while it began as a hoax, it has started “being used in some circles as a sincere expression of white supremacy.”

However, some on Twitter suggested the gestures were just part of something called the circle game, wherein someone makes a circle gesture with their fingers and if another person looks at it, the instigator gets to punch them.

Malcolm in the Middle – The Circle Game

Some suggested that whatever the students' motive, their actions showed poor judgment.