"Two Midshipmen were participating in a sophomoric game, commonly known as 'the circle game,' with West Point Cadets during the live broadcast." 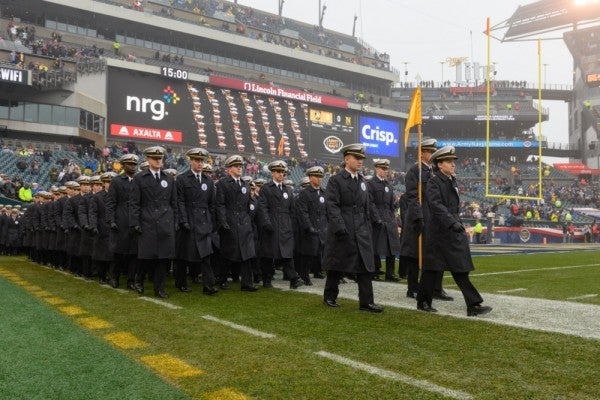 Rapidly completed investigations by the U.S. Naval Academy and the U.S. Military Academy at West Point have concluded that controversial on-camera gestures made by several cadets and midshipmen were not “white power” symbols.

In a Friday statement, the Naval Academy said it had completed its probe into hand gestures by two midshipmen during the Dec. 14 Army-Navy game.

“The investigation — which included review of video footage, more than two dozen interviews, and background checks by Naval Criminal Investigative Service and the Federal Bureau of Investigation — determined that two Fourth Class Midshipmen (freshmen) were participating in a sophomoric game, commonly known as 'the circle game,' with West Point Cadets during the live broadcast,” the academy said in a statement. “The investigation found no evidence of racist intent.”

Academy officials added that, while not racist in intent, the on-camera gestures demonstrated “immature behavior” that would be “appropriately addressed.”

The hand gesture in question involves making the thumb and forefinger into a circle.

The incident immediately stirred up controversy on the internet, although some came to the defense of the cadets, saying the “circle game” was well-known in the military.

“The Naval Academy is fully committed to preparing young men and women to become professional officers of competence, character, and compassion in the U.S. Navy and Marine Corps; in this case, we recognize there is more work to be done,” Naval Academy Superintendent Vice Adm. Sean Buck said in a statement.

The chief of Naval Operations also weighed in on the investigation, underscoring how high the embarrassing dustup had been elevated and how concerned military officials were about preserving a reputation for integrity.

“As a Navy, we expect our Sailors to conduct themselves with integrity and character at all times, and that is why we completed an immediate investigation following this incident,” Adm. Michae Gilday said in a statement. “To be clear, the Navy does not tolerate racism in any form. And while the investigation determined there was no racist intent behind these actions, our behavior must be professional at all times and not give cause for others to question our core values of Honor, Courage, and Commitment. We must be standard-bearers. We must be above reproach. That is what sets us apart as a fighting force.”

West Point officials simultaneously released a similar statement regarding their own investigation into the matter, although they did not specify how many academy cadets had been caught on camera making the gesture or what class year they belonged to.

“The investigating officer concluded that the cadets were playing a common game, popular among teenagers today, known as the 'circle game' and the intent was not associated with ideologies or movements that are contrary to the Army values,” they said in a statement.

The game was being played in the stands before an ESPN host entered a crowd, according to the statement.

“Based on the results of the investigation, those cadets involved will receive appropriate administrative and/or disciplinary actions,” it said.

Lt. Gen. Darryl Williams, the superintendent of West Point, said in a statement that for cadets, “living and leading honorably” meant behaving professionally at all times.

“Last Saturday we had reason to believe these actions were an innocent game and not linked to extremism,” he said, “but we must take allegations such as these very seriously. We are disappointed by the immature behavior of the cadets.”

“Racist statements, gestures and symbols have no place in our Army. The investigation determined there was no racist intent by cadets,” he said. “The American people trust our Soldiers to do the right things the right way. We must be mindful of behavior which brings that trust into question and ensure our actions meet the high ethical and professional standards our nation expects the American Soldier to uphold.”