The Army And Navy Are Not Ready To Fight, According To The Service Chiefs 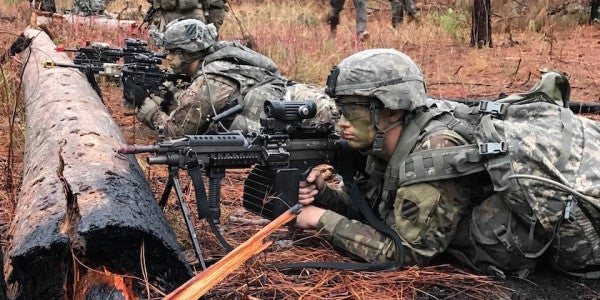 Only three of the Army’s 58 Brigade Combat Teams are ready to fight; 53% of Navy aircraft can’t fly; the Air Force is 723 fighter pilots short; and the Marine Corps needs 3,000 more troops.

“We're just flat-out out of money” to address those immediate needs and provide the additional personnel and maintenance funding to plan for the future, Navy Adm. William Moran said Tuesday in summing up the concerns of four-star officers across the services.

In testimony before the House Armed Services Committee, Moran and other officers said their first priority is for Congress to scrap the budget caps known as sequestration under the Budget Control Act of 2011.

The Air Force currently is the smallest, the oldest, the most poorly maintained and the “least ready in our history,” said Gen. Stephen Wilson, vice chief of staff of the Air Force.

“Your Air Force needs Congress' support to repeal the Budget Control Act,” he said. “We need to act now before it's too late.”

Gen. Glenn Walters, assistant commandant of the Marine Corps, said 3,000 more Marines are urgently needed to bolster a force that is “insufficiently manned, trained and equipped.”

In addition, the Marine Corps faces a $9 billion backlog for infrastructure, he said. The Corps also needs more amphibious ships, or “We will find our Marine Corps optimized for the past,” he said.

Rep. Mac Thornberry, a Texas Republican and the committee's chairman, seemed taken aback by the assertion of Gen. Daniel Allyn, the Army's vice chief of staff, that only three of the service's 58 BCTs have all the troops, training and equipment needed.

Related: Army Chief Of Staff Has One Clear Message For Troops: ‘Be Ready’ »

“That's accurate, Mr. Chairman,” Allyn said in response. “It reflects the reality of both the op tempo and the recurring demands our forces face. That is where we're at today.”

About 55 of the BCTS “would require something like 30 days to meet the demands of immediate combat,” he said.

Thornberry and Sen. John McCain, an Arizona Republican and chairman of the Senate Armed Services Committee, have consistently called for an end to sequester to boost military spending, and the effort appears to have bipartisan support in Tuesday's meeting.

“The worst enemy we have is ourselves” in the stalled effort to increase defense spending, said Rep. Jim Cooper, a Tennessee Democrat.

“The problem is ours, not yours,” he told the testifying officers. He called the Budget Control Act a “bigger threat” than any adversary and said “we should solve this sequestration problem.”

Rep. Madeleine Bordallo, a Democrat and the delegate from Guam, brought up a sore point for members of Congress with military bases or facilities in their districts. She suggested that the services could cut overhead and improve their bottom lines by shutting down unnecessary bases under a new round of the Base Closure and Realignment Commission (BRAC).

The testifying officers quickly agreed with the need for another BRAC round. In the Air Force, “we think we have 25% excess capacity” at bases, Wilson said. “BRAC would help us” save money and “put that back into solving our fiscal problems.”

Rep. Jackie Speier, a California Democrat, questioned whether the military is really in such dire straits with more than $600 billion being spent annually on defense. She cited an op-ed by retired Army Gen. David Petraeus, which said that current funding is more than adequate to meet readiness demands. “He [Petraeus] suggests that we have enough money,” Speier said.

The testifying officers quickly disagreed. Petraeus' arguments “don't match the facts as I see them,” Allyn said. “We have significantly attrited” in the Army in terms of personnel with projections showing that the active-duty force would go down to 450,000 under sequestration.

“In terms of near-term readiness, there is a significant challenge in not only meeting op tempo but having sufficient forces ready,” Allyn said.

Moran added, “I would disagree with Gen. Petraeus on saying we're ready today.”

The thrust of the hearing on the need for more military spending and an end to the sequester process was in line with the frequently stated campaign pledges of President Donald Trump for major increases in defense funding.

In an address to troops at U.S. Central Command on Monday, Trump said the military has been “depleted” by constant deployments and combat since the terror attacks of Sept. 11, 2001.

“You've been lacking a little equipment. We're going to load it up. You're going to get a lot of equipment,” Trump told the troops.

Rep. John Garamendi, a California Democrat, did not argue against more military spending but asked, “Where's the money? The president is suggesting a tax cut of more than one trillion dollars. We'd better have a big credit card.”

According to informal proposals to Congress obtained by The Associated Press, the services plan to ask for a $30 billion increase in the 2017 defense budget for more troops, planes, ships and maintenance funding to halt the erosion in readiness.

The Budget Control Act of 2011 set limits on how much could be spent on defense through 2021 while exempting money provided for overseas warfighting operations. The Bipartisan Budget Act of 2015 provided temporary relief from the cuts, but unless the law is changed, the limits will return in the 2018 budget year.

At a session with defense reporters Monday, Thornberry said that the House committee is considering asking for “at least” $18 billion more in a supplemental budget request. The money could come out of the existing overseas contingency operations war, he said.

Thornberry said the $18 billion would add back money for modernization and equipment funding that was cut last year from the House version of the defense budget before it ultimately passed.

To increase defense spending, Congress will have to overcome significant roadblocks. Neither the House nor the Senate has yet come to grips with the fiscal 2017 defense appropriations bill, which will allow the military to spend the money authorized in the budget.

The fiscal 2018 defense budget request is one of the agenda items awaiting the new administration, which has yet to install a new head at the Office of Management and Budget.

“There's no disagreement at all that we need to increase defense spending and need to pay attention to bigger budget picture,” Thornberry said Monday. “Let me just say, we cannot wait to fix our airplanes until we get all our budget problems solved.”

He said both the appropriations bill and the markup of the new budget request, expected to have a $640 billion baseline, will be priorities for early in the year.

Defense Secretary Jim Mattis last week put readiness and “accelerating” the campaign against the Islamic State of Iraq and Syria at the top of his wish list in his first budget guidance to the force on complying with Trump's executive order to rebuild the military.

Achieving those goals will require more money for the military than was requested in the fiscal 2017 budget by former President Barack Obama, Mattis said.

To jump-start the process, Mattis said he had ordered up a proposed amendment to the fiscal 2017 budget. He did not go into details but said in a memorandum that the amendment would “address urgent warfighting readiness shortfalls and new requirements driven by acceleration of the campaign against ISIS.”

Mattis said the amendment might include immediate requests for more troops and possible cuts to lower priority programs, but overall would add up to a “net increase over the FY2017 topline requested by the previous administration.”

He said that drawing up the amendment and beginning negotiations with Congress would be the job of Deputy Defense Secretary Bob Work, a holdover from the Obama administration.

Mattis said that the proposed amendment would be submitted to the White House Office of Management and Budget no later than March 1. He also put Work in charge of working up the Department's fiscal 2018 budget request by May 1, indicating that Work would be staying on longer than he had anticipated.