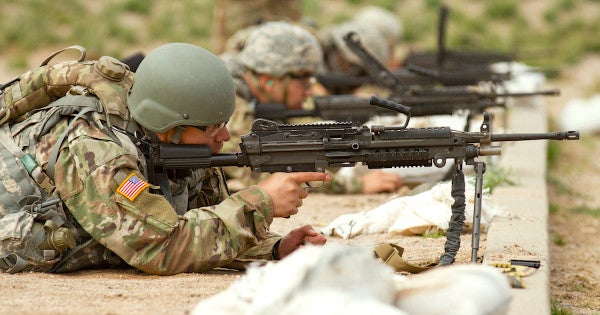 Lt. Gen. Paul Ostrowski told members of the Senate Armed Services Committee's Airland subcommittee that the Army will down-select the winning automatic rifle and carbine versions of the Next Generation Squad Weapon (NGSW) as early as fall 2020.

The Army invited gunmakers to build the NGSW prototypes under a Prototype Project Opportunity Notice released in late January.

“We expect competitors to bring in their prototypes for both weapons systems in the month of May; we will begin the evaluation process and down-select down to three in the month of July of this year,” said Ostrowski, who is the principal military deputy to the assistant secretary of the Army for acquisition, logistics and technology.

The service will then put all three companies' prototypes “through their paces,” he added, with a down-select planned in the first quarter of 2021, and fielding in the fourth quarter.

The NGSW is one the top programs in the soldier lethality priority of the Army's new modernization strategy.

“The current weapon systems that we have are OK in the fight, with respect the war that we are currently in both Iraq and Afghanistan,” Ostrowski said.

But the current 5.56mm weapons are not capable of penetrating the modern body armor of near-peer adversaries such as Russia and China, he said.

“What these weapon systems are designed to do is to be able to reach out to greater ranges and have the penetrating power in order to defeat threats at those ranges,” Ostrowski said.

The Army is banking on the new 6.8mm projectile it has developed, which it is providing to gunmakers so they can design a complete cartridge for their prototype weapon systems.

Subcommittee chairman Sen. Tom Cotton, R-Arkansas, asked service officials to explain what the new cartridge will mean for the weight of new automatic rifle and carbine versions of the NGSW, compared to the current M4 and M249.

Ostrowski said the Army wants the new ammunition to weigh the same as the current 5.56mm.

“So polymer casings — case-telescoped, for instance — these are new and innovative ways that industry has been working to try to make sure that these rounds are not much heavier at all than the current 5.56mm rounds that we carry today,” he said.

Cotton also wanted to know how challenging it will be for the Army to field a new round.

“What are the challenges that you anticipate for the logistics system making that change from the current 5.56mm?” he asked.

Ostrowski said he expects “very little” challenge in this area since the Army plans to field these new weapons only to the infantry and other close-combat units.

“These go to the top 100,000 that are in the close fight with the threat,” he said. “Today, we use 7.62mm, we use 5.56mm — entering the 6.8mm into this will not be an issue whatsoever in terms of the logistics piece. Will it take a little bit of time to get it in? Yes, it will. But it should not be an issue, based on the fact that we are not issuing this to the whole, one-million-man Army.”

SEE ALSO: The Army's Next-Generation Rifle Will Be The iPhone Of Lethality, Officials Say