The U.S. Army's Next Generation Squad Weapon effort looked a lot more possible this week as the three competing weapons firms displayed their prototype 6.8mm rifles and automatic rifles at the 2019 Association of the United States Army's annual meeting 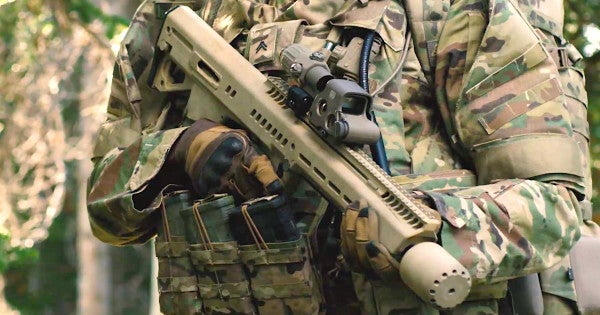 The U.S. Army's Next Generation Squad Weapon effort looked a lot more possible this week as the three competing weapons firms displayed their prototype 6.8mm rifles and automatic rifles at the 2019 Association of the United States Army's annual meeting.

Just two months ago, the Army selected General Dynamics Ordnance and Tactical Systems inc., Textron Systems and Sig Sauer Inc. for the final phase of the NGSW effort — one of the service's top modernization priorities to replace the 5.56mm M4A1 carbine and the M249 squad automatic weapon in infantry and other close-combat units.

Army officials, as well as the companies in competition, have been guarded about specific details, but the end result will equip combat squads with weapons that fire a specially designed 6.8mm projectile, capable of penetrating enemy body armor at ranges well beyond the current M855A1 5.56mm round.

There have previously been glimpses of weapons from two firms, but this year's AUSA was the first time all three competitors displayed their prototype weapons, which are distinctly different from one another.

“A lot of progress has been achieved just in the last 12 months since the previous AUSA,” Brig. Gen. Dave Hodne, director of the Soldier Lethality Cross-Functional Team and chief of infantry at the Maneuver Center of Excellence at Fort Benning, Georgia, told an audience Tuesday at AUSA.

“In fact, there were some aspects of last year's AUSA where some would say what we are pursuing was unachievable, and I would tell you those impossibilities are on the floor here today,” he said.

The team from General Dynamics unveiled its bullpup-style NGSW rifle and AR prototypes — a design which puts the magazine and bolt-carrier group behind the pistol grip and trigger group.

While popular in other parts of the world, the bullpup design has never really caught on in the U.S. as the military, as well as the civilian market, prefers the more traditional design in which the magazine well and bolt group are forward of the pistol grip.

“The reason we ended up with a bullpup is because, when they are talking about all the stuff we are not supposed to talk about — the velocities … the effects downrange that are going to be required to push the projectiles — we came back and said, 'What do we need?' We need barrel length,” said Kevin Sims, senior director of Business Development at General Dynamics.

“I personally had concerns about the acceptance of the bullpup design, but I think that has been sort of eliminated with a lot of user feedback that we have received,” Sims said. “People aren't worried about it. It's a very balanced rifle; it's not front-heavy.”

Sims, like other competitors, kept some details vague, such as the weight, except to say the rifle is under 10 pounds and the AR is under 11 pounds, meeting the NGSW requirement.

“We continue to try and remove weight where we can, but we've got a big cartridge that we are plugging,” he said.

General Dynamics has teamed with True Velocity to produce a composite-cased 6.8mm cartridge. For gun-making expertise, GD joined with Beretta USA, which made the U.S. Army's M9 pistol for decades before the Sig Sauer Modular Handgun System was chosen in 2017 to replace it.

All fire controls are ambidextrous. Like the rifle version, the AR is magazine-fed, said Sims, who added that the designers haven't decided on a rate of fire yet.

“We are going between 500 and 750 shots per minute on the AR and will make a determination on which one hits the sweet spot,” he said.

GD has chosen Delta P Design to make the suppressors for both prototypes, which are made from a hardened Inconel alloy for extreme light weight, Sims said.

Textron's NGSW-Rifle and NGSW-Automatic Rifle as photographed at Fort Benning, Georgia, during the Annual Maneuver Conference at the Fort's Maneuver Centre in September 2019(U.S. Army/Markeith Horace)

Textron has developed its CT technology in 5.56mm, 7.62mm, 6.5mm and now 6.8mm. The technology uses a plastic case rather than a brass case to hold the propellant and the projectile, resulting in a significant weight savings, Wayne Prender, senior vice president for Applied Technologies & Advanced Programs at Textron, told reporters at AUSA.

“I am really proud to showcase for you for the first time our Next Generation Squad Weapon technology offering,” Prender said.

The team from Textron includes Heckler & Koch — the maker of the Marine Corps' M27 infantry automatic rifle — and Olin Winchester for its small-caliber ammunition production capabilities.

Like all competitor prototypes, Textron's weapons feature an intelligent rail that will power the Next Generation Fire Control system being developed under a separate Army effort. Textron's initial rifle prototype featured a large battery pack mounted beneath the weapon's handguard, Prender said.

The current rifle prototype has a much smaller battery pack mounted in the collapsible buttstock, he said.

Lewis Machine & Tool Company has been selected to make the suppressors for both weapon variants, Prender added.

Sig Sauer's NGSW offerings look the most traditional out of all three competitors since Sig's rifle variant is an M4-style design.

“It's what soldiers know; the innovation can be … inside. That's what allows you to advance the weapon system, but soldiers … are used to training with an M4-style weapon system,” said Paul Snyder, product manager for belt-fed systems at Sig Sauer.

One unique feature on the rifle variant, known as the Spear, is that it boasts a side-charging handle located on the non-ejection port side of the weapon, so soldiers don't have to take their hand off the pistol grip to charge the weapon, he said.

The rifle weighs under 10 pounds and features a 13-inch barrel “that gives us the velocity we need to hit the requirement,” he said. It features a two-position gas setting for suppressed and unsuppressed firing.

The AR variant, known as the MG 6.8mm, weighs under 12 pounds, features a 16-inch barrel and has a rate of fire of 600 rounds per minute, Snyder said.

While it's belt-fed, the AR still has a magazine well that the 50- and 100-round ammo-belt bags insert into, he said.

“Also, we can load with the cover down; there is no need to lift the tray,” Snyder said. “Typically, if you are in an engagement, you have to lift the cover, sweep the links out of the way, check tray and then load and shoot.

“For us we keep control of the last link.”

The gunner drops the belt-bag magazine, inserts a new one and jams the belt in — which pushes the last link out and the weapon is ready to fire, Snyder said.

The AR is also capable of quick-barrel changes to prevent overheating, he said. And like the rifle version, the AR has a two-position setting for suppressed and unsuppressed firing.

Snyder pointed out that Sig Sauer — the maker of the Army's new Modular Handgun System — is the only competitor that is doing all of the work in-house.

“Everything on the table today is Sig,” he said. “We are the only ones that haven't partnered up with anyone. This is all Sig — Sig guns, Sig suppressor, Sig ammo, Sig accessories.”