The Army has a new non-lethal weapon to help soldiers in Afghanistan “irritate and deter” potential adversaries with pepper-filled balls, Army... 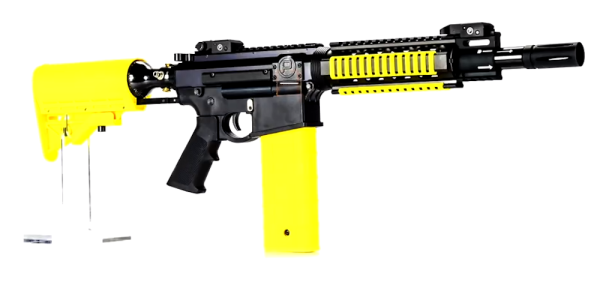 The Army has a new non-lethal weapon to help soldiers in Afghanistan “irritate and deter” potential adversaries with pepper-filled balls, Army Times reports.

The non-lethal launcher, known as the Variable Kinetic System (VKS), is made by PepperBall Technologies. It fires projectiles much like paintballs containing a hot pepper solution.

“We are truly honored the U.S. Army has selected PepperBall's VKS to use as its non-lethal protection in its mission to defending the United States,” Ron Johnson, CEO of United Tactical Systems, which owns PepperBall, said in a statement.

“Our VKS platform was the only non-lethal source that was capable of complying to the US Army's standards,” Johnson added.

The projectiles have a range of around 50 yards and leave a “debilitating cloud,” impacting the eyes, nose and respiratory system. The irritant, which is 5% pelargonic acid vanillylamide (PAVA) and a synthetic version of pepper spray, is released when the projectile makes contact.

The Army awarded a $650,000 contract for the weapons, which reportedly have the same controls and ergonomics of the M4/M16 weapons system, which many soldiers already carry. In other words, it will not be tough for most soldiers to transition into using these non-lethal launchers.

In total, the Army reportedly purchased 267 of the weapons, which are currently being used in training.

Weapons like this can help soldiers in high-intensity, urban settings and especially during crowd control situations.