"I feel betrayed, to be honest ... the sacrifices that my mother and I have done for my country have been in vain." 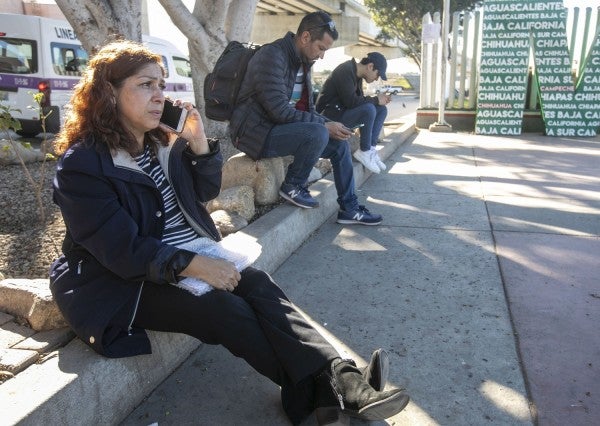 She prayed for a miracle for the past 30 days as media attention around her case escalated. But in the end, the mother of a U.S. Army intelligence officer was deported on Thursday to Tijuana.

The removal, based on previous deportations, had been scheduled for about a month, when her requests to be allowed to stay in the United States were denied. Despite that, Rocio Rebollar Gomez, 51, held out hope until the very last moment that the federal government would show her mercy and allow her to remain with her family.

“I'm only asking for an opportunity that they let me stay with my family, that they don't separate us,” said Rebollar Gomez in Spanish shortly before her scheduled appointment to self-deport Thursday morning. “They're separating me from my family forever. I don't have a hope of seeing them after.”

Rebollar Gomez's son, 2nd Lt. Gibram Cruz, 30, is not allowed to travel to foreign countries without getting permission from the military, a long and complicated process. Neither her youngest daughter, nor her grandchildren, have their passports yet.

Immigration and Customs Enforcement, the federal agency responsible for deportations, did not respond to a request for comment about her deportation in time for publication.

The agency previously told the Union-Tribune that Rebollar Gomez's pending deportation was “in accordance with federal law.”

“The immigration laws of the United States allow an alien to pursue relief from removal; however, once they have exhausted all due process and appeals, they remain subject to a final order of removal from an immigration judge and that order must be carried out,” ICE said in mid-December.

Rebollar Gomez first came to the United States in 1988. She was picked up in the mid-'90s in a workplace raid and quickly taken out of the country.

She was removed again twice in the mid-2000s, falling short of the requirements for one program that would have allowed her to stay because of that previous departure. Each time that she left, she crossed illegally back into the U.S. to return to her young children.

When she was picked up again in 2018 through an anonymous phone call that sent ICE to the store she owned near the house she had just bought, she told federal officials that she was afraid to go back to Mexico.

She has no criminal record, but because of her prior deportations, she wouldn't be eligible for asylum. She was allowed to try for another kind of protection that has a higher legal standard of proof.

Though her brother was kidnapped and killed in her hometown of Acapulco after cartel members extorted thousands of dollars from her family, she didn't pass the screening process.

She then applied for a program for family of military members that would have allowed her to stay in the U.S. She was denied at the beginning of December.

When she showed up for her appointment on Thursday morning, officials with the private company that would remove the ankle monitor tracking her location told her attorney that ICE would consider looking at the case again. The attorney went with Rebollar Gomez's son and oldest daughter to meet with ICE in a building nearby.

When they came back out, their faces were grief-stricken.

Rebollar Gomez had been taken to the border and deported as soon as they left to walk over to ICE, said attorney Tessa Cabrera.

“I feel betrayed, to be honest,” Cruz said. “The sacrifices that my mother and I have done for my country have been in vain.”

“They swept her out from under our feet basically,” his sister Karla McKissick said.

In an effort to push ICE to reconsider its decision to deport her, Rebollar Gomez had taken her story public. Though the move didn't win her any extra time in the U.S., it did buy her a few extra days with her son.

He came home shortly before Christmas for what he thought might be his last days with her and then went back to his post. After his superiors saw news articles about what was happening to his family, they granted him extra time to be with his mother.

He arrived at his mother's blue house in Lincoln Park again the Friday after Christmas after driving most of the night from his base in Arizona. He didn't tell anyone he was coming and surprised his mother around 9 a.m. that morning.

She joyfully made enchiladas to welcome him back as they reminisced about her time working for Mary Kay and the pink Cadillac she'd gotten from the company for beating her sales goals. Cruz would sometimes borrow the car at night, when in the darkness it looked more white than pink, he said.

While they talked, she noticed her ankle monitor vibrating and quickly swapped its battery for one that was charging by the kitchen window.

She used to wear a lot of dresses, she said, but with the shame she felt at wearing the ankle bracelet that tracked her location for her last month in the United States, she switched to loose-fitting pants.

As the new year drew closer, and with it Rebollar Gomez's looming deportation date, the resemblance between Rebollar Gomez and Cruz began to show more and more — their eyes carry stress in the same way.

Their differences also began to show. Cruz, in an effort to be realistic, tried to talk about options they would have if she ended up back in Mexico. His mother didn't want to talk about it. She wanted to keep believing in her miracle.

With her deadline for leaving the country moving ever closer, she found herself losing her appetite and struggling to sleep. She got sick for the first time in seven years.

“I feel like my body no longer has strength,” Rebollar Gomez said.

Her family gathered for her birthday the weekend before her deportation. They took the grandchildren to see “Frozen 2” and ate a chocolate cake, her favorite.

On Monday, she put the car title and insurance in her youngest daughter's name and signed a power of attorney that would give the recent college graduate the ability to make decisions in the mother's absence.

By Tuesday, she was worried that maybe she hadn't done all that she could, maybe there was someone else to call for help. A friend took her to local organizations to ask if there was anything more that could be done.

The family spent the evening on New Year's Day making posters. Rebollar Gomez's grandchildren drew pictures of themselves with her on their signs. The oldest one drew a picture of the two of them at the zoo.

While they were busy inside, someone came between about 9 p.m. and 11 p.m. and vandalized Rebollar Gomez's fence, writing a misspelled racist slur against Mexicans in brown spray paint.

For Cruz, the vandalism reinforced his worries that his mother, now famous from the news coverage of her case, would be even more of a target in Mexico for the cartels that had kidnapped her brother in Acapulco a few years ago. His body has still not been found.

Despite the hateful message, the next morning — the final one in her son's country — Rebollar Gomez kept believing that her miracle would come. She didn't take anything with her to her appointment except a small bubble wrap bag with her passport and a couple of documents. She didn't pack a suitcase.

She continued to give interviews on her couch, crying as she spoke, while reporters filed into her home early that morning. Cruz sat in an armchair watching her, his eyebrows knit with worry and his hands clenched.

After she finished, it was his turn in front of the cameras. Her oldest daughter McKissick, 34, came to stand with her. She gently brushed her mother's hair with her fingers and told her to stay strong.

“We have no experience being in front of any cameras,” McKissick said later at the rally. “We're humble people who live quiet lives who want to succeed and contribute to our country.”

“We don't want to take anything away from anybody,” she added.

At the rally, the family took turns addressing a swarm of media.

“One great thing about my mother is that to the last second, she maintains hope, and that's something I've tried to emulate,” Cruz said.

Less than an hour later, Rebollar Gomez called her children from the Tijuana plaza on the south side of the San Ysidro Port of Entry. McKissick left to pack clothes for her mother and bring them to her.

Once they found each other a few hours later in El Chaparral plaza, they held each other tightly. Rebollar Gomez's half-sister, the only family member they have in the city, came to meet them.

Rebollar Gomez will stay with her for at least a few days while she figures out her next move.

She said she knows that there are beautiful places to visit in her country of birth. She has sometimes wished to know Mexico better, but only if she would then be able to return to her children and her home in the U.S.

“The point is the moral and psychological hurt that happens to everyone who's been through this,” she said, sitting under a tree in El Chaparral Plaza in Tijuana. “It changes your life.”

She recognizes that she can pick herself up, find work and try to make a life for herself, but the pain of separation makes her question whether it's even worth it.

“Being far from your children that you've raised and given your life to, and being alone all of a sudden with nothing… it's not that you can't keep going and push forward, but if they've taken away your motivation? If it's stayed behind?” she said.

After his mother's removal, Cruz headed back to her house to gather his belongings and begin a long drive. He has orders to report to Fort Hood in Texas on Friday. He's already committed to at least three more years in the military.

Rebollar Gomez's youngest daughter plans to start working, and the family hopes to put enough money together to keep her house as long as they can. Without their mother's income — she was the main breadwinner, often working up to 16 hours a day at two jobs — that will likely be difficult.

For Rebollar Gomez, the fight is not yet over.

“Maybe there's still something to be done,” she said. “All is not lost. I truly believe that.”

She still has hope that she'll be able to come back. She hasn't lost her faith.