These Army Officers Follow In Their Fathers’ Jump Boots

“Six minutes!” William Grimes would shout the command from the front door of his home in Clarksville, Tennessee. And, soon... 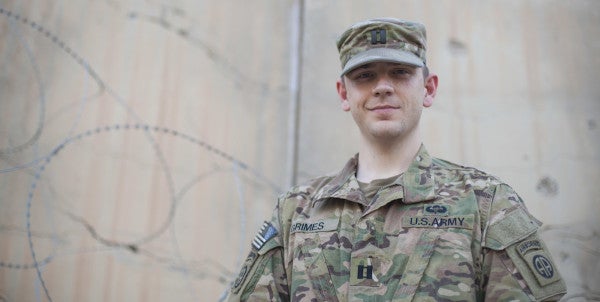 William Grimes would shout the command from the front door of his home in Clarksville, Tennessee. And, soon enough, his two grandchildren would be standing in front of him, eagerly awaiting what would come next.

“Get ready!” Grimes would shout, continuing his modified jumpmaster commands as his two would-be paratroopers got ready for elementary school.

With that, a young Stoney Grimes and his little sister would run their hands along an invisible parachute.

Years later, now Capt. Stoney Grimes essentially hears the same commands while serving with the 82nd Airborne Division. The inside of planes echo with the familiarity of his childhood home.

For Grimes, being a paratrooper is, in essence, a family business. His grandfather spent 25 years in the Army, including several in the 82nd. His father, also named Stoney Grimes, served with the All Americans for five years.

The Grimes family is not unusual.

A study released several years ago by the Pentagon showed that 80 percent of troops came from a family where at least one parent, grandparent, aunt or uncle, sibling or cousin also had worn their nation’s uniform. More than a quarter had a parent who served.

On and around Fort Bragg, especially, young men and women feel the pull to follow in the footsteps of their fathers or mothers.

First Lt. Cody Brown grew up hearing his father’s war stories. Clinton Brown, who retired as a master sergeant in 2007, would bring his son to his Special Forces team room, where the boy would run around in a uniform and “work Army” between tales.

Brown and Grimes said their parents played key roles in setting them up for their careers. Neither ever felt pushed to the Army. Instead, they said, their families instilled values that made them want to serve their country.

The young Army officers are among 2,100 paratroopers with the 2nd Brigade Combat Team, 82nd Airborne Division deployed to Iraq, where they are training, advising and assisting their Iraqi counterparts in the fight against the Islamic State.

And back home, their father figures couldn’t be prouder.

William Grimes was long out of uniform by the time his grandson and granddaughter – ages 8 and 4 – came to live with him at his home near Fort Campbell, Kentucky. But the familiar routines of 25 years of Army service still shaped how he raised the children following the death of their father.

William Grimes, a Vietnam veteran who retired as a sergeant first class, would walk the kids through jumpmaster commands. It was a game they would play.

“They had fun doing it with me,” the elder Grimes said from his home in Tennessee. “They liked doing it.”

And so, the morning “jumps” became a family tradition.

At the order of “Go!” the two children would race past their grandfather out into the world.

“We would jump off into the yard,” Stoney Grimes said.

By the time the school bus arrived, William Grimes said, the children were often practicing parachute landing falls nearby. The bus driver would slow to a stop, he said, look out at the children and laugh.

“We did it like they were little paratroopers,” William Grimes said. “It was a fun little ritual we had.”

At the time, Williams Grimes didn’t think his grandson would follow the “family” business.

“When he was little, he wanted to be a weatherman,” William Grimes said.

It wasn’t until high school, when Stoney Grimes became involved with the Junior Reserve Officer Training Corps, that he turned his attention to a future Army career.

“He took to that like a fish to water,” William Grimes said.

Speaking from Iraq, Grimes said he never felt pressured to put on a uniform.

“He never once pushed me or encouraged me to join the military until he saw I had an interest in it,” he said. “His focus was only on making me happy.”

But there’s no doubt the elder Grimes played a big role in the younger man’s career choice.

“He’s my hero,” Stoney Grimes said. “I look up to him… I credit his counsel and his advice and how he raised me for what I am and who I am today.”

Grimes commissioned as an Army officer seven years ago out of Austin Peay State University, a college near his home in Clarksville. From the start, Grimes knew he wanted to wear the “AA” of the 82nd Airborne.

“It’s been sort of a family thing for us,” he said of his father’s and grandfather’s service in the division. “My grandfather was a jumpmaster with 200-plus jumps… It’s extremely important for me. It’s a point of pride.”

Grimes got his wish after attending the captain’s career course. He’s spent the last two-and-a-half years in the 2nd Brigade Combat Team.

In his current role, he controls American howitzer crews in Iraq supporting the anti-ISIS fight.

“It’s extremely rewarding,” Grimes added. “Paratroopers here love doing their jobs. And they love getting after it.”

In another part of Iraq, 1st Lt. Cody Brown also is following in his father’s footsteps.

A graduate of the U.S. Military Academy at West Point, New York, Brown hoped to earn a coveted position within the 82nd Airborne. He was ecstatic to learn that not only would he wear the maroon beret, but his first assignment would come in the same battalion where his father first served as an enlisted soldier.

Brown joined the 2nd Battalion, 508th Parachute Infantry Regiment in May of 2016. Like his father before him, he soon found himself preparing to deploy.

“I guess it was fate,” Brown said.

As a young soldier, Clinton Brown had hardly broken-in his boots by the time he deployed to Grenada in 1983.

“It was scary,” the elder Brown recalled. “But I was also excited. I was psyched up.”

Whereas the elder Brown was sent to Grenada on a short-notice mission, his son had more time to prepare.

Cody Brown said he knew before joining the brigade that it would likely deploy.

“I had heard it through the rumor mill,” he said. “I absolutely wanted it to happen. I was pretty excited to help out.”

Now he’s heading up a platoon providing security at an outpost in Iraq.

“We’re not the actual ones fighting here,” he said of the mission to help Iraqi forces defeat ISIS. “But it’s pretty important… it’s pretty rewarding being part of the larger picture.”

Brown said he and his soldiers take pride in knowing that Iraqi forces are pushing ISIS out of Mosul and out of the country.

“I believe we’re doing a good job,” he said.

Before he deployed, the younger Brown leaned heavily on the experiences of his father.

“He’s been deployed countless times,” he said. “His biggest advice for me was to make sure I continued to train my soldiers so nobody gets complacent.”

Clinton Brown spent nearly two decades of his 25-year career at Fort Bragg, although he was often serving in other parts of the world.

After serving in the 82nd Airborne Division, the elder Brown said he spent time with the 3rd and 7th Special Forces Groups, with the John F. Kennedy Special Warfare Center and School, with U.S. Army Special Operations Command and Special Forces Command.

At each stop, the younger Brown was constantly by his father’s side, listening to his father’s friends and teammates share their war stories and chiming in with questions of his own.

“He just listened to whatever we would talk about,” Clinton Brown said. “He just latched onto that stuff. He was just born to be in the Army, I guess.”

But Clinton Brown wasn’t initially sold on his son following into the “family business.” He knew that Army life would keep him away from his family. He knew that if his son put on the uniform, his future would be filled with missed holidays, milestones and time apart.

“I thought I had done enough for him,” Clinton Brown said of his own service. “I didn’t want him to come in the Army.”

But the younger Brown was stubborn. His father taught him to be a leader and to never take the easy way out.

To Cody Brown, the path to the Army was clear and obvious.

“Being surrounded by the military culture… it really kind of shaped what I wanted to do with my future,” he said.

But Brown’s father did win in one regard. He convinced his son not to enlist directly after high school. Instead, he pushed him to go to college. That college turned out to be West Point. And Clinton Brown couldn’t have been happier.

“It made me really proud,” he said.

“He definitely urged me in that direction,” Cody Brown said of his father’s wish that he become an officer.

The older Brown taught his son to always trust the experience and expertise of noncommissioned officers. But he told them those NCOs also need strong leaders.

“He said they deserve a good leader and he thought I could be that leader one day,” Brown said.

“I always preached in his head ‘Respect NCOs and listen to them,’” Clinton Brown said. “’Try to do the right thing, always.’”

William Grimes told his grandson that he could do whatever he wanted in the Army. But, he said, to be an officer, he must want that added responsibility that comes with commanding soldiers.

“It’s not for everyone,” the elder Grimes said. “You have to be dedicated. Sometimes you can’t think about yourself… They have a tough job.”

Stoney Grimes was up to the challenge. And now, he’s doing the most rewarding work of his career.

“We’re out here doing an important job in a historic time,” he said. “It’s a life experience that I’ll never forget.”